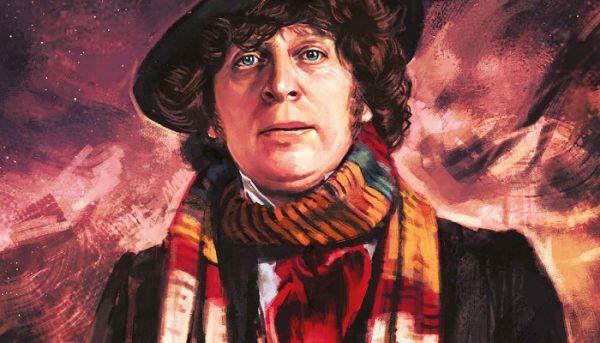 Chronology Placement: Set between “Pyramids of Mars” and “The Android Invasion”

The combination of the Fourth Doctor and Sarah-Jane might be the most recognisable and iconic pairings of the classic Doctor Who era, so it was no surprise that Titan Comics would choose to revisit their time in the TARDIS with its first Fourth Doctor mini-series. The writing team of Gordon Rennie & Emma Beeby wisely choose to make the most of the Fourth Doctor’s connection to Gothic Horror adventures by revealing an untold jaunt through myth and legend during Victorian times that chronologically predates the fan-favourite serial, “The Talons of Weng-Chiang”.

As one would expect from a story containing the word ‘Medusa’, Rennie and Beeby’s story is rooted in Ancient Greek mythology, although viewed through the unusual prism of the Victorian age. This wonderful anachronistic tone is foreshadowed in the opening issue as the Doctor and Sarah-Jane enjoy a Cowboy & Indians show in a Victorian vaudeville theatre. Even when the Doctor and Sarah-Jane eventually travel back in time to Ancient Greece, it doesn’t detract from the strong early-Victorian tone that is evident throughout the entire adventure.

Rennie and Beeby introduce two new monsters into Doctor Who canon – the hulking great Scryclops that act as bodyguards for the mysterious Lady Carstairs and the eponymous Medusa. Both of which are brought to life perfectly by artist Brian Williamson, whose cinematic styling and realistic artwork help emphasise the Gothic Horror elements of the tale. He also does a brilliant job at capturing both Tom Baker and Elisabeth Sladen’s likenesses and mannerisms in a static medium. His faces are so realistic that, along with the authentic dialogue, you can almost hear Baker’s booming voice delivering the lines. Unfortunately, there are some issues with perspective during some of the earlier sequences, especially those involving the Scryclops.

While the plot itself might be somewhat paper-thin, this mini-series certainly captures the essence of those televised Fourth Doctor adventures with some nice twists-and-turns throughout the narrative. Long-term fans of the series will undoubtedly feel nostalgic with this adventure as the writing team manage to identify the key elements of the Fourth Doctor era and cram them into this storyline. It’s like a ‘greatest hits tape’ of the Fourth Doctor’s time in the TARDIS, ticking off the various high-points from Tom Baker’s run. There’s even a cheeky reference to the Weeping Angels in this storyline that helps bridge continuity between the classic and modern eras of Doctor Who.

Titan Comics has achieved great success with its ongoing comic adventures of the Ninth, Tenth, Eleventh and Twelfth Doctors; but this series demonstrates that the brand can also delve further back into the Doctor’s lifespan to create equally as engaging stories. Whether you’ve seen an episode with the Fourth Doctor or not, there is plenty to enjoy here and no real prior knowledge is needed. The mish-mash of genres and time periods is so quintessentially Doctor Who that it does truly feel like a comic-book adaptation of a lost episode, yet the fan-service isn’t too overpowering that it would put off those fans only familiar with the modern incarnations of the Doctor. As seen from the expansive Big Finish range, there’s plenty of potential for storytelling with the Classic Doctors, and I hope Titan Comics continues to use its miniseries to explore the Doctor Who universe prior to 2005.

Doctor Who: Gaze of the Medusa is available in print from Amazon, Forbidden Planet and all good book stores; and in a digital format from Comixology and Amazon Kindle.