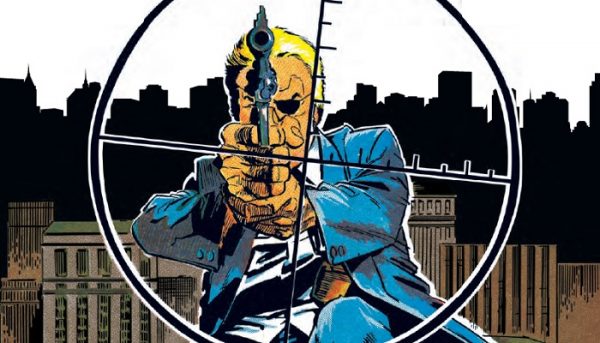 One-Eyed Jack is the first official title from Rebellion’s dedicated Treasury of British Comics imprint, collecting lost classics from the golden age of British Comics following Rebellion’s acquisition of the Fleetway and IPC Youth group archive from Egmont UK in August 2016. Appearing in Valiant from 1975 – 1978, One-Eyed Jack was clearly influenced by the success of Dirty Harry and Magnum Force, bringing that same gritty New York tone to life in the pages of the boys adventure comic as its lead character firmly adopted the same anti-hero role made popular by Clint Eastwood. Written by John Wagner, who would later go on to create Judge Dredd for 2000AD, the origins of the Mega-City One lawman are evident in these stories as ultra-violence and justice blur together to give readers an adrenalin-fuelled rush.

After losing the use of his left eye in the line of duty, Jack McBane becomes an unstoppable force for justice as he breaks every rule in the book to ensure that the crime-infested streets of New York are cleaned up. Most episodes in this complete collection are between four and six pages long, and despite the brevity of the stories, they feel packed to the brim with action and adventure. Wagner never talks down to his audience and rarely pulls his punches in the subject matter that he and artist John Cooper explore. This is gritty and raw storytelling at its best, and it is no surprise that the series courted controversy during its run.

Having missed this series when it was published – to be fair, I didn’t exist at the time – I don’t get the same nostalgic feelings that a fan revisiting the series might have, but it is striking how atmospheric Wagner and Cooper’s work on this strip is. For first-time readers, it is like stepping back in time and experiencing seventies New York one black and white panel at a time. I was overwhelmed by how authentic everything felt, which is not surprising given it was written at the same time it was set, but there is still something special about how well the series captures that particular moment and time in space. Rebellion has unearthed the comic-book equivalent of a time capsule for us, and I think the series definitely benefits from that retro feeling.

Jack McBane is often referred to a “prototype Judge Dredd” and while he shares a similar ‘tough cop’ persona, McBane’s willingness to break the law to get his man is a complete departure from Dredd who instead follows the law to the letter. There are other similarities between the pair though, Wagner relies heavily on the New York setting – almost establishing it as supporting character, much in the same way he uses Mega-City One to support Dredd. The art from John Cooper emphasises this strong feeling of locale expertly, with every single panel dripping with realism and atmosphere. The black-and-white colour scheme heightens the tension in the air as McBane tackles organised crime, armed robbers and drug-dealers. The effectiveness of this monochrome style is evident when the series switches to colour for the final story, losing much of its charm and mood.

The stories are grittier and relentless in this collection, often ending on a dour note or a bitter feeling of justice that doesn’t quite sit right. McBane is a flawed and complicated man, driven to act first and ask questions later and it is this attitude that drives him towards a surprisingly heart-breaking conclusion when he shoots and kills a young boy. It might be easy to dismiss McBane as a Dirty Harry rip-off, but Wagner introduces depth to the character as the series goes on and that final tale is one of the highlights of the whole collection, deconstructing the character and examining the consequences of his actions with a maturity that exceeds its target audience.

John Cooper’s artwork is nothing short of fantastic throughout the entire collection, establishing the tone and location of the series with a confidence that matches its lead character. His clear, straight-forward line work is a joy to follow and really emphasises the grittiness of the New York streets. Each moment of criminality and violence (of which there are many!) is captured with such intensity and emotion that readers are dragged into the story against their will and find themselves rooting for McBane and his unorthodox solutions. I cannot exaggerate just how much fun this collection is, especially for a fan of the seventies crime-drama genre. If you love classic cop shows like Starsky & Hutch, The Streets of San Francisco or even UK equivalents like The Sweeney, then this graphic novel is an absolute must-read!

One-Eyed Jack is available in print and digital formats from Amazon and 2000AD’s Webshop from 15th June 2017. A special edition (limited to 200 copies) is exclusively available from 2000AD’s Webshop and includes a bookplate signed by John Wagner.