Much like how the original Spider-Girl series sprung out of a single-issue alternate universe storyline, Spider-Gwen took the comics world by storm soon after the solicitations for her debut issue Edge of Spider-Verse # 2 appeared online. Most of this was down to her distinctive costume, designed by Robbi Rodriguez, which made a definite statement about the character – this wasn’t anything like any Spider-Woman we’d ever seen before. With its distinctive mix of white and neon purple colours, coupled with the hooded cowl, the costume was an instant hit and sent the cosplayers running to their sewing machines before the first issue had even dropped.

Internet word-of-mouth went into overdrive, leading the first issue to sell out almost immediately and receive a further four more printings – not to mention a re-branding as Spider-Gwen # 0 later in the year. Sure, the Marvel hype machine had done its job and built up plenty of anticipation and speculator interest in the single issue, but was the story any good?

Well, the simple answer to that is a resounding “YES!” – skipping over the well-trodden origin story with a fantastically effective double-page spread, Jason Latour showcased the familiar beats from Amazing Fantasy # 15 spliced with some new tidbits that sets Spider-Gwen’s Earth-65 apart from the mainstream Marvel Universe we all know and love.

In this universe, Gwen was bitten by the radioactive spider instead and Peter, consumed by his inadequacies and jealousy, attempted to gain his own powers using Curt Connors’ formula, becoming The Lizard. In an inspired twist, Peter dies in Gwen’s arms (mirroring “The Death of Gwen Stacy” in the mainstream universe) and teaches Spider-Gwen the importance of power and responsibility, whilst the circumstances of his death causes her to become a wanted felon. It’s truly impressive to see that origin condensed into a single splash page without losing any of the impact at all. Later issues in the ongoing series revisit key scenes from this sequence to flesh out Gwen’s part in Peter’s death, as well as the impact that it has on the Parker family.

The Edge of Spider-Verse series was initially an anthology series to set-up the upcoming “Spider-Verse” event, which ran through Amazing Spider-Man during 2015 and saw every alternate version of Spider-Man ever come together to defeat the dimension-hopping Inheritors. However, Latour had sown enough seeds in this issue to warrant a return to Earth-65 once the event was over, and the enduring popularity of the Spider-Gwen character meant that an ongoing series was quickly commissioned.

While it might be tempting to label Spider-Gwen as a Spider-Girl or Spider-Woman knock-off, the character really does hold its own place in the Marvel Universe with a distinctive tone that sets her apart from her predecessors. To distil it down to an elevator pitch, I’d say it was “Spider-Man meets Scott Pilgrim”, mainly due to her band “The Mary Janes”, and the slight punk attitude seen in both the script and art. There’s a wonderful post-modernism feel to the series and youthful energy to Latour’s script and Rodriguez’s striking artwork.

Fans of the mainstream Spider-Man continuity will notice plenty of nods and variations on classic characters, such as beat-cop Ben Grimm (aka The Fantastic Four’s Thing) and Frank Castle (aka The Punisher). Aside from this minor nods to classic continuity, Latour makes some bold changes such as introducing Matt Murdock as a slimy, villainous lawyer who works for the Kingpin – the complete antithesis of his character in the regular Marvel Universe. Familiar foes are also redesigned for the series, with The Rhino and The Vulture both making an appearance alongside Felicia Hardy – who undergoes a more drastic change to become the French jewel thief, La Chat Noir. While these are fun in-jokes for hard-core Spider-Man fans to pick up on, the comic is completely accessible to new readers as well – in fact, it was one of the first titles my girlfriend begun to read and she loves it!

On that note, Spider-Gwen fits in nicely with Marvel Comics’ current pattern of introducing and developing “All-New, All-Different” variations of its iconic characters with Miles Morales, Kamala Khan, Cindy Moon and Jane Foster stepping into the shoes of established ‘franchises’ and quickly building up strong fan-bases. With a definite message of female empowerment, Spider-Gwen is a fantastic role model for young women and female comic book fans, in general. Yet, there’s no reason to shuffle the title off as a “girl’s book” – while Latour has stripped away some of the familiar elements that makes Spider-Man who he is, the core essence of the character is still there – much like it is in Miles Morales’ Ultimate Spider-Man book. This is Spider-Man viewed through a different prism, and the result is a fantastic spin on an old classic. 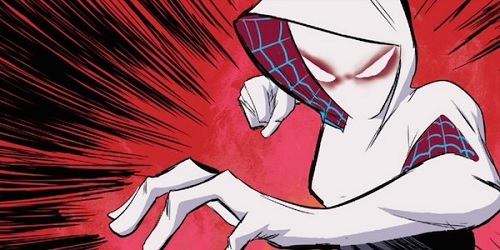 With the initial rush of interest and subsequent high sales of its ongoing series, it seems that Spider-Gwen has made an impact on the fan-base that preceding female Spider-Man titles have failed to make, even Spider-Girl, which had its own loyal fan-base and reached over 130 issues! Could it be that readers are becoming more accepting of alternate realities, following the “Spider-Verse” cross-over which dragged them all into the core 616 universe, or perhaps the unique ‘punk rock’ tone of the series has struck a chord with comic book readers?

If Old Man Logan and Miles Morales can make the transition from their own pocket universes into the Marvel Universe proper, I wonder how long it will be until Spider-Gwen becomes a permanent fixture. Having read this series, it is clear that the character is already a major landmark in the Spider-Man chronology, and I suspect she will be around for generations to come. My advice – get in on the ground floor and read up on this fascinating take on the Spider-Woman format. You won’t regret it!