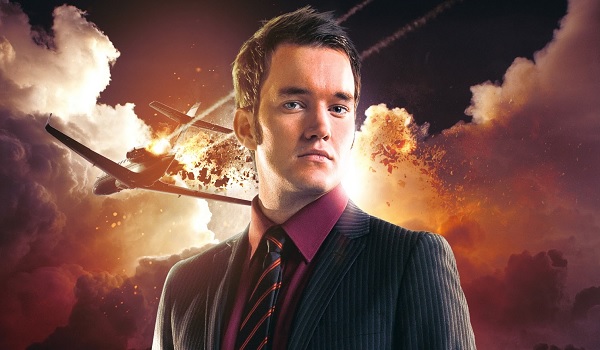 Synopsis: The SkyPuncher is the first private space flight. But Ephraim Salt’s visionary project has gone horribly wrong – the ship is falling out of the sky and there seems no way to stop it. Ianto Jones thought the flight would be sabotaged. The only problem is… he’s on board.

Due to his shocking death in Torchwood: Children of Earth, Ianto Jones remains one of the most tragic characters in the Torchwood series and one that fans struggle to let go off, as evidenced by the real-life Ianto Jones memorial located in Cardiff. Played to perfection by Gareth David-Lloyd, the character’s demise represented a sea change for Torchwood as it moved away from its team-based format to focus primarily on the relationship between Jack and Gwen. Personally, I prefer the initial two series of Torchwood and I’m really glad that this current series of audio adventures from Big Finish showcases the entire team, even if it means the stories are set in the past.

Even though, Ianto is dead and buried in real-time, James Goss makes sure that this untold tale of Torchwood’s “spy butler” retains a sense of excitement and urgency. Set aboard a sabotaged spaceship hurtling towards Earth, Goss’ script crackles with an intense pace and energy that feels true to the TV series. Instead of a full-cast audio, the adventure is a two-hander like those “extra special” episodes of EastEnders and while it might sound limited and awkward, it actually strengthens the audio, giving it a distinctive voice whilst illustrating a sense of loneliness as Ianto and Zeynep have to rely on each other to survive.

Trapping Ianto on the spaceship lends the audio a claustrophobic feel, despite the fact it takes place in the wide-open skies above Earth. At times, the tense nature of story reminds me of the film Buried, in which Ryan Reynolds is buried alive with only his cellphone for company. Goss ensures that the action quotient is high, despite the seemingly static setting and Gareth David-Lloyd has some great dialogue to work with, reminding listeners just why his departure was such devastating blow to the series.

The second voice in this two-hander is Lisa Zahra, who plays call-centre worker Zeynep who is dragged into the murky, black-ops world of Torchwood against her will. She holds her own against David-Lloyd, trading sardonic quips in the face of danger. One of the strengths of the audio is the way their relationship develops throughout the hour-long phone call, from strangers to a friendship forged in the fire of a rapidly-descending aircraft. Goss’ script is razor-sharp and practically flawless, although the ending does come and go rather quickly, leaving little room for a denouement.

I have to admit that I was a little bit reluctant to listen to a “lost adventure” featuring a long-dead member of Torchwood, even if it was Ianto Jones, but I’m happy to say that “Fall to Earth” surpassed my expectations dramatically. It might be one of the best Big Finish audios that I’ve ever heard, thanks to the tight script work, excellent vocal performances and that gripping high-concept situation. Despite the fact that some of the plot threads regarding the mysterious Committee are annoyingly unresolved, “Fall to Earth” is quite simply out of this world…oh, that was a terrible pun, wasn’t it?! But I mean it, this is one of the most engaging and thrilling audio adventures I’ve heard, and one that will have you on the edge of your seat throughout. Probably not one to listen to on a plane, though…

Torchwood: Fall to Earth is available from Big Finish on physical CD or digital download. It can also be found on Amazon UK in the physical CD format.

One thought on “Torchwood – “Fall to Earth””