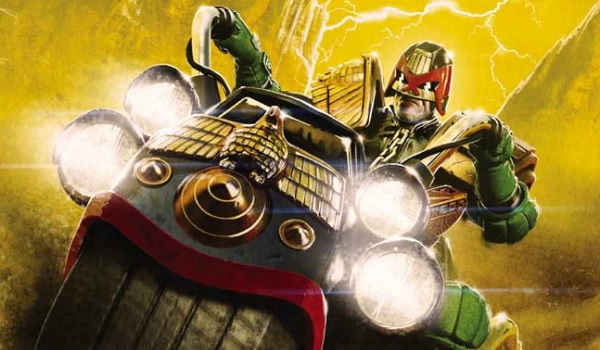 Synopsis: As the Judges cart Rico Dredd away for questioning and exile on Titan, his clone-brother Joe comes under scrutiny. They’re cut from the same cloth; can Joe Dredd be trusted? An investigation begins, and Dredd is shipped off to an iridium-mining town in the Cursed Earth, which has come under pressure from mutant raiders. But everything is not as it seems. When the reason for the raids becomes clear, Dredd will have some tough decisions to make.

The first book in this second trilogy of adventures detailing the early years of Judge Dredd’s career, “The Righteous Man” deals with the ramifications of Rico Dredd’s arrest – a defining moment in the Joe Dredd’s development into the steadfast enforcer of the law that we know today. Having written the immensely enjoyable novella, Rico Dredd: The Titan Years – “The Third Law” which chronicled Rico’s downfall and eventual incarceration on Titan from his point of view, Michael Carroll opens the Judge Dredd: Year Two trilogy with a tale that deals with the after-effects on Joe Dredd and the cloud of suspicion that the arrest of his clone-brother has caused.

I highly recommend picking up Rico Dredd: The Titan Years – “The Third Law” to read alongside this novel, as the two stories cross-over at times and supplement each other perfectly to offer dual character studies of both Dredd twins. I love how Michael Carroll has expanded upon the original “Return of Rico” storyline, which appeared in one single Prog of 2000AD and had filled in the various plot holes and made it a far richer story. It’s a shame that Rico himself is dead in the current continuity as Carroll and the other writers of this series of novellas have made him such a interesting antagonist, and it feels like his potential was never really capitalised on. I’d love to see Carroll revisit his Rico Dredd: The Titan Years series, possibly ending with a retelling of “Return of Rico” to give closure to this story-arc.

Clearly well-versed in early Judge Dredd continuity, Michael Carroll’s narrative is a joy to read as he manages to weave in plenty of nods to existing stories without alienating readers. Those who pick up on his ‘easter eggs’ are rewarded – for example, upon reading this novel, I was surprised to see reference to Sector Zero in one chapter, which turned out to be the focus of a present-day Judge Dredd story running in 2000AD at the time of which the book was published. This is a brilliant bit of foreshadowing, and I’m sure that not many people picked up on that sly bit of continuity. Another aspect of Carroll’s storytelling that really impresses me is how he deals with plot threads that I hadn’t even considered – it hadn’t even occurred to me that the Justice Department would be suspicious of Joe Dredd following Rico’s arrest, and Carroll manages to use this sub-plot to create a background of tension throughout his tale.

The novel itself feels like two stories weaved together, much like with Carroll’s earlier Judge Dredd novel, “The Cold Light of Day”, which used the Mega City 5000 race as a backdrop to Dredd’s investigations. The SJS investigation into Dredd’s past forms the backbone of this novel, whilst the forefront revolves around Dredd and a small team of Judges being sent to a mining village on the outskirts of the city to deal with Cursed Earth raiders. This part of the novel feels reminiscent of The Seven Samurai, although in true Justice Department fashion, they don’t waste the resources of seven samurai and instead send three Judges. I’m not sure whether there was an intentional decision to evoke memories of that movie, but I enjoyed that feeling of Dredd attempting to protect a small town and its colourful inhabitants from an external threat. Of course, there is more to the plot than that and Carroll introduces some wonderful curve-balls throughout the novella to challenge the reader’s expectations.

As one of the recurring voices in the Judge Dredd comic strip, Michael Carroll clearly has a firm grasp on the character and the world he lives in. Even dealing with the series’ early continuity – an era seldom explored in the comics – Carroll demonstrates an encyclopedic knowledge of the universe and manages to create stories that fit seamlessly into existing continuity and actually enrich those original stories, fleshing out weak spots and righting inconsistencies. As a leading expert in early Dredd, it is reassuring to know that he will be shepherding the upcoming Judges series of novellas, offering his expertise and knowledge to other writers playing about in the Mega-City One sand-pit.

While I am eager to praise Carroll’s attention to detail, I don’t want to overshadow his skill in writing strong and exciting prose. The action sequences in this adventure are wonderfully choreographed and flow straight from the words on the page into my imagination where they are re-enacted with all the efficiency of a Crimewatch reconstruction. His characterisation of Dredd, young or old, is perfect and he explores the character’s human side in subtle ways. Obviously, Dredd will always be an impassive, uncaring bastard but Carroll gets under his skin here, thanks to the novella format, and showcases a self-awareness of his faults that is fun to read. “The Righteous Man” is another knockout of a novel from the Judge Dredd: Early Years range, answering questions about Rico’s downfall that readers probably didn’t realise they had and continuing to mould Joe Dredd into the firm, but fair lawman that we love to hate. These novels are some of the best Judge Dredd stories that I’ve ever read, and those readers reluctant to switch from panels to prose should definitely reconsider as they’re missing out!