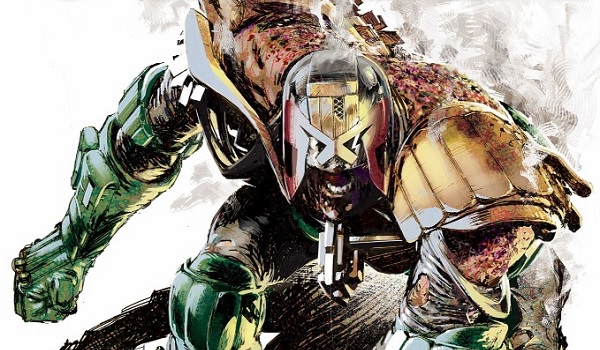 Synopsis: Mega-City One, 2081, Joe Dredd’s second year on the streets as a full-eagle Judge. He’s got the experience, he’s done the sked-time, but no Judge is infallible – all it takes is one bad day, and all those years of training can disappear in the simple pulling of a trigger. A routine arrest, an ambush, an explosion. The perp’s down, but Dredd is bleeding and burned, his Lawmaster is destroyed, and he’s in a bad part of town with no backup. For the first time in his career, he’s truly alone…

After kicking off the Judge Dredd: Year One range with the superb murder-mystery “City Fathers”, Matthew Smith returns for the series’ second year with a more action-centric tale. Severely injured and cut off from the Justice Department, this story sees Dredd at his weakest point – reliant on his own physical and mental strength – as he attempts to overcome his greatest test. For those familiar with a seemingly invulnerable Dredd, it is quite a shock to see the character reduced to near-death, fighting against his own body as much as the various gang-members looking to cut him down.

Thematically, the story feels very reminiscent of Die Hard and rather appropriately, Dredd 3D, in that it involves a lawman outnumbered and in unfamiliar territory, forced to improvise if he is to survive. Smith’s narrative is extremely tense and action-packed, as you might expect from the synopsis, and he manages to ensure that Dredd’s weakened state is a constant presence throughout the tale to heighten the sense of danger. Dredd’s grit and determination to succeed is what gets him through this adventure, and it is a quality that we’ve seen in many other Judge Dredd adventures. That said, it is rare for Dredd to receive this much of a physical beating – off the top of my head, I remember only a few instances where Dredd is physically vulnerable as he is here: “Goodnight Kiss”, “The Dead Man” and more recently, “Titan”. Feel free to comment below if there’s any other near-death stories I’ve missed…

The extent of his injuries allows Smith to perform an introspective examination of the character as he hallucinates and pushes his body pass breaking point to survive. It’s a fantastic glimpse at the character’s inner-most thoughts, and feels utterly accurate to the character. People are quick to dismiss Dredd as a robotic, instrument of the law but this novel demonstrates the subtle nuances in the character – something that has definitely been explored in greater depth as the series has developed. I love the intricacies of the character and how he can be perceived as fascist or hero, dependant on the point of view of the story. In this adventure, Dredd definitely leans towards the hero role, especially in the final chapters of the novella.

Fast-paced and difficult to put down, “Down and Out” really stands out due to the amount of punishment that Dredd endures throughout the novel. Smith is keen to make his leading character run through a brutal gauntlet to prove his worth as a Judge, and it is absolutely thrilling to see Dredd persevere to the end. Those wanting to see a different, more vulnerable side to Dredd will love this adventure as it places our anti-hero in the unfamiliar role of the underdog, stripped of his gadgets and forced to rely on his wits. The prose flows beautifully and entices you to read “just one more chapter”, and before you know it, the story has come to an end. Cheaper than the price of a pint, and arguably much more satisfying, “Down and Out” is an adventure that deserves to be on the reading lists of every Judge Dredd fan.