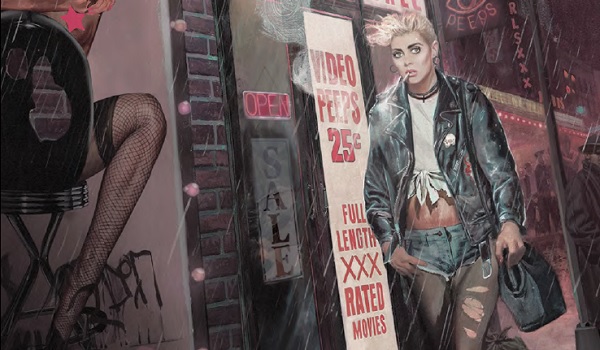 Hard Case Crime is an American publishing imprint of hard-boiled crime novels, which was founded in 2004 by Charles Ardai and Max Phillips. With over 120 releases in its catalogue, the series recreates the feel of those classic paperback crime novels from the 1940s and 50s, complete with gorgeous pulp fiction cover art that just draws the reader in. The imprint recently made the move to the graphic novel format through Titan Comics, with the release of Triggerman and Peepland – the latter of which caught my eye, thanks to its unusual setting of New York’s Red Light district.

When peep-booth worker Roxy Bell chances upon some evidence of a high-profile murder, she unwittingly causes a chain of events that quickly spirals out of control, resulting in a domino-effect of death and destruction on the streets of New York. Inspired by author Christa Faust’s own experiences in the Times Square peep booths in the late 80s, Peepland weaves together several grimy and downbeat narrative threads to form a noose that threatens to hang its protagonists before the tale’s end. Those hoping for righteous justice and a happy ending should look elsewhere as this is a story that bucks expectations and narrative convention.

Joining Faust on writing duties is Gary Phillips, who is known for his work on hard-boiled crime comics such as Angeltown and Vigilante: Southland. The pair complement each other nicely as it never feels as if there are two voices in the narrative, suggesting a strong and cohesive writing process between them both. Drawing upon Faust’s own experiences injects the story with a concentrated dose of authenticity that reveals the realities of working in a peep show booth. Rooted in memories, but awash with fantasy, Peepland is a curious beast – offering readers a glimpse behind the scenes of the seedy strip clubs, whilst revealing the layers behind a murderous conspiracy.

There’s a wonderful sense of momentum about this tale as Faust and Phillips ratchet up the tension throughout the five issues, and the various supporting characters who appeared separate to the main storyline become embroiled and affected by the shocking murder at the heart of the tale. The pair skilfully lay out their pieces on the board, playing a complicated game of chess with the fates of their protagonists until the final few scenes where it seems like fair play is out of the window and the pieces come tumbling down. It’s wonderful, arresting storytelling that will have you gripped to the page and open-mouthed at the various tragic twists that unfold. Dark, violent and unflinching – this is exactly what hard-boiled crime fiction should be.

Contributing heavily to the atmosphere of this storyline is the art of Andrea Camerini, who manages to drag the sleazy strip-joints of Times Square out of Christa Faust’s memories and display them onto the page for the reader to gawp at. Both titillating and tawdry, Camerini captures that “film noir” essence in his artwork and really emphasises the drama and despair evident in Faust and Phillips’ script. 1980s New York is a wonderfully cinematic setting as it is, but Camerini builds upon that picturesque environment to deliver a rich and evocative feeling that recreates that time and place effortlessly. The opening to Chapter Five, which reveals the death of one of the series’ supporting characters is a gut punch, perfectly orchestrated by Camerini, which demonstrates his skill as a storyteller, and not just an illustrator. It should also be noted that Marco Lesko’s colouring is also a key factor in establishing the tone and voice of this series, alternating between the neon glare of the Red Light District and the grimy streets of New York.

Hard-boiled to perfection, Peepland is a visceral thrill-ride that never lets the reader go from its grip, dragging them deep into the seedy underbelly of New York. Christa Faust and Gary Phillips work perfectly in sync to orchestrate an opera of a crime drama, constantly rushing towards its many crescendos as the stakes get higher and higher. Subverting expectations and shocking readers time and time again, this pulp fiction drama is a wonderful departure from the world of superheroes and capes, and I absolutely loved immersing myself into the gritty world that Faust, Phillips and Camerini created. Tapping into a craving I didn’t realise I had, I am already jonesing for another dose of Hard Case Crime and luckily, Titan Comics plans on releasing plenty more graphic novels in the imprint’s line. Not to mention, the copious amounts of paperback novels. With an entire ocean of narrative sprawling out in front of me, I am looking forward to submerging myself into the inky-black depths of film noir.

Peepland is available in print and digital formats from Amazon and digitally from Comixology. Follow @ComicsTitan and @HardCaseCrime on Twitter for more information about future Hard Case Crime graphic novels.