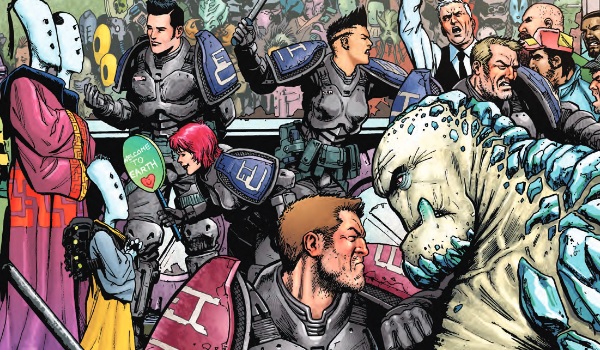 Ripped from the headlines and fed through a science-fiction prism, Grey Area is one of those series that is built upon a core idea that seems so obviously brilliant that you’re surprised that no-one has already thought of it. Addressing political hot-button topics such as immigration and asylum-seekers on an interplanetary scale, Dan Abnett holds up a mirror to all that is ugly about “Little England” and tells a thoroughly engaging story about border control at the Global Exo Segregation Zone, where alien visitors must pass through customs before visiting Earth.

Told in small episodic chunks, Abnett captures that same voyeuristic feel that comes from watching Border Control television shows, but populates his series with a strong quintet of lead characters. Initial stories introduce readers to the world of Grey Area through new recruit Jana Birdy, but the spotlight gradually moves over to Adam Bulliet – the charismatic leader of Section Twenty of the ETC. The short-burst storytelling suits the series well, mirroring the episodic nature of modern television serials and allowing story arcs to develop over time. As a result, the series feels a strong candidate for adaptation as a long-form TV series once 2000AD has established itself with its upcoming Judge Dredd: Mega City One show. 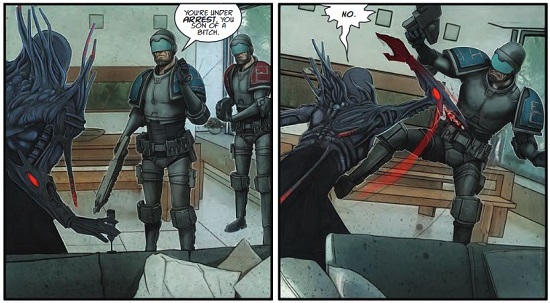 This first volume of stories features artwork from a trio of 2000AD superstars, and although each artist has their own distinct style and personality – I was struck by how consistent the storytelling felt across the different adventures. Karl Richardson illustrates the initial two story-arcs of the series, establishing both the look and feel of the characters. The gritty, militaristic tone often found in his artwork fits the series well, highlighting the griminess of the Grey Area facility and the violence that threatens to boil over amongst the disparate alien races contained within. Lee Carter imbues his stories with the same abstract realism seen in his work for Indigo Prime, conjuring up gloriously alien creatures whilst ensuring the humanity of the series’ protagonists shines through. Finally, Patrick Goddard captures the popcorn-chomping blockbuster action of the series with some brilliantly fast-paced adventures. All three artists are utterly sublime, and it is tough to choose a favourite interpretation of the characters and their world.

Abnett once again demonstrates his ability to create strong, engaging characters in a small amount of time as he quickly establishes his cast of heroes, and while characters like Feo and Kymn are given limited spotlight in this particular collection, he still manages to flesh them out beyond simple archetypes and give each member of the team an identifiable role and raison d’etre. While most of the stories revolve around either Birdy or Bulliet, the beauty of Abnett’s writing and the format of Grey Area is that any of the protagonists can be made the focus of a short single episode adventure. It feels reminiscent of his early work on Sinister Dexter and how he developed seemingly unconnected vignettes into a tapestry of adventures that culminated in the mega-epic, “Eurocrash”. It rewards long-term readers who pick up on the plot threads developing over time, and collected here in one place, it is even easier to see how Abnett foreshadows events and builds his subplots in the background of his “done in one” adventures. 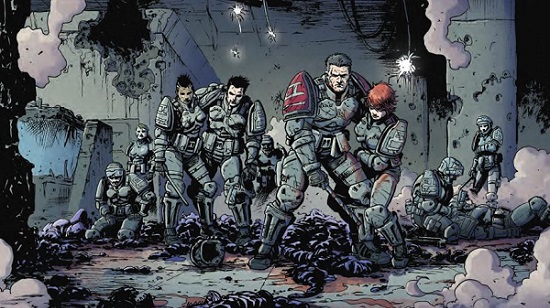 One element of Grey Area that really appealed to me was the manner in which it subverted the typical ‘airport security’ stories by adding a science-fiction twist. In “Did You Pack Your Own Luggage?” the classic concept of ‘lost luggage’ is shaken up with the aliens themselves ending up in the baggage system. I also liked Abnett’s take on an alien stag do, cavity searches and the difficulties of a currency exchange system when alien species barter with live creatures. The setting of an alien border control just invites plenty of imaginative opportunities for stories and Abnett grasps them with both hands. Some of the shorter stories are just classic 2000AD, succinctly telling an engaging story in less than a quarter of the time that an American comic would do it in. At times, Grey Area feels reminiscent of Alan Moore’s chaotic and unpredictable Future Shocks during the eighties, to the point where a cameo appearance from D.R and Quinch would not be entirely unexpected.

Since Grey Area debuted in 2012, the political landscape has shifted once again with Brexit and Trump’s inauguration bringing immigration and populism into the spotlight, making the series even more prescient and relevant than before. If you look closely at the front cover to this collection, you might even notice a reference to the infamous “breaking point” poster used by UKIP during the EU referendum campaign. The series works on multiple levels; while stories such as “Xenophobia” and “One of our Own” look at extremism and racism using extra-terrestrials as parallels to immigrants, other stories such as “Rates of Exchange” are just fun action-filled romps. It is this ability to switch gears and deliver completely different types of story that puts Grey Area in the same league as Judge Dredd and Strontium Dog. With its stunning artwork and razor-sharp scripting, Grey Area is a perfect example of the uncompromising storytelling to come out of 2000AD in recent years.

Grey Area: Vol. 1 – “This Island Earth” is available in print and digital formats from Amazon and directly from 2000AD’s Webshop