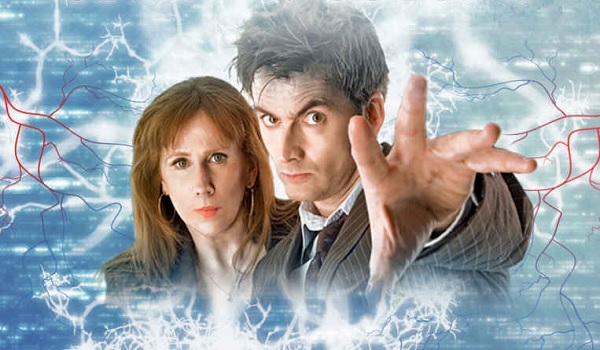 Chronology Placement: Set between “Forest of the Dead” and “Midnight”

Synopsis: All over the world, people are “ghosting” each other on social media. Dropping their friends, giving vent to their hatred, and everywhere behaving with incredible cruelty. Even Donna has found that her friend Hettie, with her seemingly perfect life and fancy house, has unfriended her. And now, all over the world, internet trolls are dying…

As more and more people give in to this wave of bitterness and aggression, it’s clear this is no simple case of modern living. This is unkindness as a plague. From the streets of London to the web cafes of South Korea and the deepest darkest forests of Rio, can the Doctor and Donna find the cause of this unhappiness before it’s too late?

Released in 2016, “In the Blood” addresses modern-day trends surrounding negativity on the internet and the ‘Trump effect’, but set within the 2008 timeline of the fourth season of Doctor Who. As a result, the narrative feels anachronistic at times – particularly since the core concept of the storyline feels much more relevant now than it would have in 2008. With her outspoken personality and emotional outbursts, Donna is the perfect companion to take part in this adventure as internet trolls across the world begin to die from a mysterious alien disease that feeds on the hatred lurking in message boards and chat-rooms.

Jenny T. Colgan is a recurring contributor to the Doctor Who mythos, having written both novels and audio adventures for the character before. I have previously reviewed “Time Reaver”, her chapter in the Tenth Doctor Adventures series for Big Finish Productions and this adventure acts as a pseudo-sequel to that tale. As with her previous work, she demonstrates a keen understanding of the Doctor and Donna’s relationship, capturing the bickering back-and-forth between the two. Even without the help of David Tennant and Catherine Tate’s voices, Colgan’s writing still manages to capture the cadence and tone of the characters – imbuing the dialogue with a lovely authenticity.

However, while Colgan nails the relationship between her two leads – she struggles to create a narrative that feels like a Doctor Who adventure. My main issue with the novel comes from the fact that the adventure hinges on the fact that the Doctor is separated from the TARDIS, which ordinarily isn’t a problem but in this novel, the reason for the separation is pretty paper-thin. I didn’t like how the plot was obviously manufactured to make the Doctor use human travel methods – mainly to pad out the novel and prevent the Doctor from solving the problem in a couple of chapters.

As a result of this ‘manual travel’, the Doctor and Donna become involved in two action set-pieces that don’t quite feel like Doctor Who. While they were thrilling and fraught with peril since the Doctor was vulnerable without his TARDIS, I couldn’t imagine them appearing in an episode of the TV show. It was a bit too “big-budget” in scale, particularly the high-speed train sequence in Peru. That said, I did appreciate seeing the Doctor in unusual Earth-based locales, as opposed to the same London setting. Globe-trotting from South Korea to deepest jungles of Peru, Jenny Colgan certainly made sure the Doctor earned his air miles.

Colgan’s strength is her characters, and I love how she gets to grips with Donna in this adventure. Set after her adventure in “Silence in the Library” and “Forest of the Dead”, this is a more reflective and emotionally raw version of the character, hurt by her experiences in the virtual world and the imaginary life she’d led in there. She gets the opportunity to stand on her own two feet frequently, displaying her strength and determination without the Doctor to fall back on. While I wasn’t overly keen on the actual plot, I cannot fault her work on the characters at all.

“In the Blood” was something of a mixed bag for me. While I really enjoyed the concept and characterisation, the implementation of the plot left me disengaged. I struggled to visualise aspects of the grand finale, and it seemed somewhat far-fetched in places – even rivalling some of Russell T. Davies more indulgent season finales, such as using memories of the Doctor to defeat the Master; or the TARDIS dragging Earth back into its rightful place on Earth. Actually, considering this was a Tenth Doctor and Donna story, that kind of sweeping ‘global change’ ending actually fits in well with the tone of the series at that point.

Doctor Who – “In the Blood” is currently available in hardback or paperback formats on Amazon, or as an eBook from Amazon Kindle.