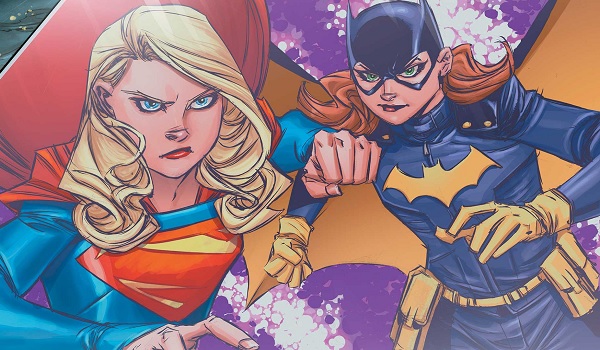 The first volume of this new DC Rebirth series of Supergirl was primarily focused on borrowing elements from the popular TV show, such as Supergirl working with the DEO and at CatCo in National City, and incorporating them into the comic-book continuity. Moving away from this approach, this second volume instead embraces elements from the wider DC Universe, teaming Kara up with Batgirl and Superman for some adventures. As a result, Supergirl feels more entrenched in DC Comics continuity, directly referencing outside events such as Superman Reborn and adventures from Batgirl Annual # 1.

Rather than using the same single, flowing narrative seen in “Reign of the Cyborg Superman”, this volume of Supergirl features a series of smaller adventures that are somewhat connected. This creates an uneven approach, which is particularly noticeable with the installment that ties into the “Superman Reborn” story-arc. Reading Supergirl in isolation from the rest of the DC Universe means that these cross-over issues can sometimes be confusing and jarring – however, Steve Orlando does a great job at ensuring readers are able to follow the story from Kara’s point-of-view, learning the massive changes alongside the lead character. While it wasn’t my favourite chapter of the book, it was much easier to understand than it could have been and did not require any additional reading outside of the title.

The standout chapter in the book has to be Supergirl’s team-up with Batgirl – introducing the characters to each other for the first time under the new DC Rebirth continuity. The prologue, written by Hope Larson with art from Inaki Miranda, was originally published in Batgirl Annual # 1 and its darker art style contrasts against the more light-hearted visuals seen over in the Supergirl series. That said, it is great fun to see Babs and Kara working alongside each other to engineer a jail-break, with Batgirl’s intelligence complementing Supergirl’s strength. It is also a nice inversion on the traditional Batman/Superman relationship, taking that familiar dynamic and giving it a feminine twist.

This story-arc with Supergirl, Batgirl and Psi is threaded throughout the collection and it comes to a head in the final three chapters as the two super-heroines find themselves trapped and powerless within the Phantom Zone. This is the best sequence in the book, and it’s great to see Supergirl relying on other powers besides her super-strength. Steve Orlando does a brilliant job at contrasting Batgirl’s logical mannerisms against Kara’s more emotional approach, playing the pair off each other and developing the relationship well. I also loved Brian Ching’s take on the Phantom Zone and its current ruler, Xa-Du. There are some absolutely breath-taking fight sequences and the double-page spreads are wonderfully apocalyptic and just leap off the page.

Brian Ching and Matias Bergara handle art duties on the main Supergirl series, and the two artists complement each other’s styles really well, creating a seamless reading experience. In fact, I didn’t even realise it was two different artists until I checked the credits page – that just how similar the two of them are! I absolutely adore the light-hearted anime style that the pair use in the series, as it suits both Supergirl and Batgirl’s personalities in this adventure. It’s really appealing and hopefully it will entice new demographics to try out the book, much like how Babs Tarr brought female readers over to the last volume of Batgirl. While the prologue chapter featuring Inaki Miranda’s artwork adopts a darker colour palette, it still captures the frenetic excitement of the series. Even though there is a sharp contrast in the two styles, it flows nicely and helps emphasise the effervescent energy from Ching and Bergara.

While “Reign of the Cyborg Supermen” felt very cinematic in nature with its action blockbuster tone and establishing of the new status-quo, this second volume definitely captured the episodic feel of the Supergirl TV series, juggling one-off adventures alongside more dramatic multi-episode story arcs. I also enjoyed how Steve Orlando implemented some teasers for upcoming storylines, developing the Emerald Empress and the Fatal Five as a “big bad” and setting Lar-On up as a potential ally in the long run. I am very invested in these sub-plots and in seeing how they come to fruition in future collections. One minor nit-pick is that while the series does try to align itself with the television show’s status-quo, it hasn’t really done anything with the DEO or Cat Grant, although the very intriguing cliff-hanger seems to suggest that the latter will have more of a role in the third collection.

Fresh, exciting and full of infectious energy, this incarnation of Supergirl is an ideal ‘gateway drug’ to the riches of the DC Universe – proving herself to be more than a female Superman, Kara Zor-El soars into the skies and straight into the reader’s hearts.

Supergirl: Vol. 2 – “Escape from the Phantom Zone” is available in paperback from all good comic-book stores, as well as online at Amazon. Digital copies are available through the DC Comics app or directly through Comixology and Amazon Kindle.