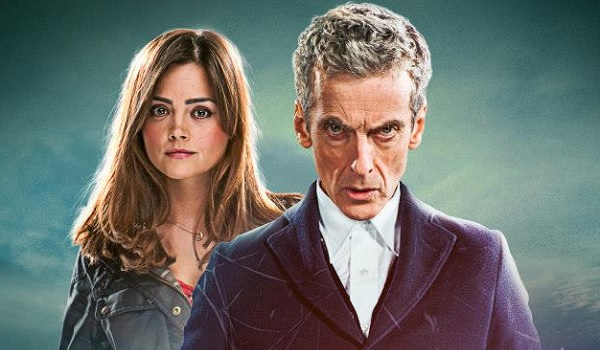 Chronology Placement: Set between “Robot of Sherwood” and “Listen”

Synopsis: Gabby Nichols is putting her son to bed when she hears her daughter cry out. ‘Mummy there’s a daddy longlegs in my room!’ Then the screaming starts… Alan Travers is heading home from the pub when something rushes his face — a spider’s web. Then something huge and deadly lumbers from the shadows… Kevin Alperton is on his way to school when he is attacked by a mosquito. A big one. Then things get dangerous.

But it isn’t the dead man cocooned inside a huge mass of web that worries the Doctor. It isn’t the swarming, mutated insects that make him nervous. It isn’t an old man’s garbled memories of past dangers that intrigue him. With the village cut off from the outside world, and the insects becoming more and more dangerous, the Doctor knows that no one is safe. Not unless he can decode the strange symbols engraved on an ancient stone circle, and unravel a mystery dating back to the Second World War.

The first thing that struck me about Mike Tucker’s tale of big insects taking over a little village was how tonally similar it felt to the classic UNIT era of Doctor Who, evoking memories of classic serials such as “Invasion of the Dinosaurs” and “The Android Invasion”. There is something about monsters encroaching on quiet village life that feels so quintessentially Doctor Who – it’s as if The Island of Doctor Moreau’s monsters were let loose on The Archers. Tucker’s narrative feels clearly influenced by the Third and Fourth Doctor’s era, and even though this adventure takes place in the present day with the Twelfth Doctor, it has a timeless quality about it.

Set early in the Twelfth Doctor’s initial season, Tucker touches upon this incarnation’s intense dislike of soldiers and the military, foreshadowing his eventual confrontation with Danny Pink in “The Caretaker”. Even though Tucker must have had limited visibility of Peter Capaldi’s interpretation of the character whilst writing “The Crawling Terror”, he still manages to capture his tone of voice and the personality of this regeneration. He also does a great job with Clara, who spends most of the adventure separated from the Doctor and proving herself to be equally as capable as the Time Lord – a theme which would be explored in more detail throughout Seasons Eight and Nine.

I was surprised at how multi-faceted this adventure was – from my first impressions, I expected it to be a fairly standard ‘giant insects’ romp, but Tucker weaves a web of intrigue (pardon the pun!) that fleshes out that initial elevator pitch of a plot. I particularly like the fact that there is a human collaborating with the alien enemies as it feels reminiscent of some of the classic Doctor Who quislings such as Mavic Chen (“The Dalek’s Master Plan”) and Tobias Vaughn (“The Invasion”). Both of whom are promised a place in the new world order, only to be betrayed by the alien forces that they help bring into existence.

Tucker’s narrative has a real cinematic quality to it, aided by the wonderful imagery of a giant bombardier beetle and an over-sized spider fighting each other to the death amongst the idyllic English countryside. There is also a sequence with an army helicopter that would have been amazing to watch unfold on a Saturday night from behind the sofa. I also loved how Tucker energised some of the exposition-led sequences by switching perspectives between the Doctor and Clara in alternating chapters as they both discovered the secrets behind Ringstone from different sources. This narrative technique ensures that some of the slower segments are given a bit of speed and variety, allowing the novel to flow at a nice pace throughout. While most of the action takes place in the same sleepy village, Tucker also plays about with different time periods to further inject a sense of movement into the plot.

Another powerful element of Mike Tucker’s writing is his ability to imbue the supporting characters with strong personalities, making them feel integral to the plot instead of disposable cannon fodder for the monsters to feast on. I really enjoyed how Angela, Kevin and Charlie all developed throughout the story to assist the Doctor and Clara in their adventures. I also loved the wide selection of antagonists that were featured in this novel, ranging from giant insects, zombified villagers, mad scientists and alien-insect hybrids. Each villain offered something different to the narrative, and I loved the creepy scenario of giant mosquitoes hunting down the last remaining humans in an abandoned village in order to turn them into some weird hive-mind. It felt like classic rural horror, further drawing parallels with the Third and Fourth Doctor’s eras and movies such as “The Wicker Man” and “Quatermass II”.

“The Crawling Terror” was a strong, solid entry into the Twelfth Doctor’s era and the perfect accompaniment to his initial adventures with Clara. I loved the contrasting mix of nostalgia and modernity that was prevalent in the story, and how Tucker developed all of his cast throughout the events of the novel. He also did a great job at capturing the atmosphere of the story’s setting – a quiet village in Wiltshire – which was a core component for the novel as much of the success of the story hinged on recreating that rural charm and underlying feeling of isolation. Tucker’s words flowed effortlessly off the page, creating a clear and easy-to-follow narrative that felt authentic to the TV show – even with some of the more audacious action set-pieces, it never felt out of place for a Doctor Who episode, and it could easily have appeared within Season Eight. In fact, given some of the episodes that did make the final cut – perhaps it would have been better if it had!

If you are a fan of rural horror, or Doctor Who serials set within the British countryside, I highly recommend giving “The Crawling Terror” a read – it is great fun, and it doesn’t require flowcharts or a road-map to follow the plot!

Doctor Who: “The Crawling Terror” is currently available in hardback or paperback formats on Amazon, or as an eBook from Amazon Kindle. An audiobook version is available for free on Audible, if you sign up for a free 3-month trial.