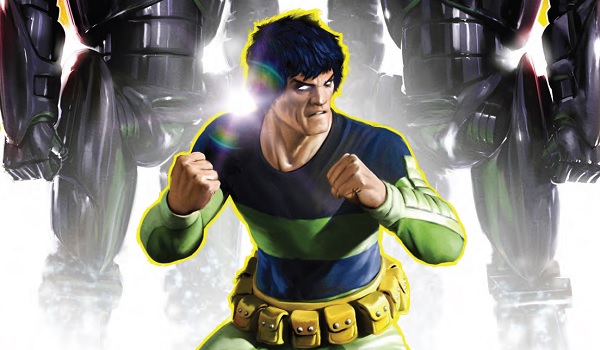 Ever since John Wagner righted one of 2000AD’s greatest wrongs and brought Johnny Alpha back to life, the Strontium Dog series has been preoccupied with the immediate ramifications of his resurrection in the epic “The Death and Life of Johnny Alpha” story-arc. After a series of revisionary flashbacks, this multi-book mega-epic provided readers with brand-new stories that took the world of Strontium Dog forward in a new post-“The Final Solution” direction. However, the continuity baggage and world-building required to set up this new status-quo for the series overshadowed the actual adventures and fans used to the self-contained nature and timelessness of the earlier flashback series weren’t happy. Presumed dead (again) after his suicidal mutiny against Earth’s government, this latest collection of stories sweeps away the continuity debris from the table and returns the focus to simple, action-packed capers.

“The Stix Fix” quickly ties up the loose ends from the previous adventure and sets Alpha off on a new mission – to rescue the kidnapped uncle of the current NKD regime. What follows is a thinly-veiled caricature of the North Korean government, specifically Kim Jong-il and Kim Jon-un. While it might feel slightly uncomfortable to read at times, Strontium Dog does have precedence in featuring real world leaders in its stories – both Adolf Hitler and Ronald Reagan received prominent cameos in classic adventures. This story-arc certainly feels like a return to a winning formula, and it is great fun to see Johnny rediscovering his lust for life (and three-boobed mutants) as he embarks on this hunt for some more dastardly members of the Stix family.

Carlos Ezquerra’s art is just flawless, and while his work on Judge Dredd is spectacular and the benchmark for all other artists to aspire to, I personally think his style suits Strontium Dog slightly better. So much of the series’ charm and personality comes from Ezquerra’s work, which explains why the series suffered when both he and Wagner weren’t involved. I love the imaginative designs he creates for the various mutants that populate the panels, often characters glimpsed in the background look like they deserve an entire series based on them. His take on Johnny Alpha simply defines the character perfectly – for a character who says so little, much of his personality comes from Ezquerra’s subtle expressions. If John Wagner is the mind of Strontium Dog, then Carlos Ezquerra is definitely the heart. Without him, the series just doesn’t work as well – a fact which has been proven true in the past.

The second adventure in the collection, “Repo Men” flows nicely from “The Stix Fix” and revisits some of the same characters and locations, namely Castor Limax and his impenetrable safe haven for the criminals of the galaxy, The Rock. Reunited with his friends and fellow former-SD agents, Johnny Alpha embarks on an Ocean’s Eleven-style heist that he hopes will inevitably lead to them repossessing the asteroid base for his clients. Again, this adventure is light-hearted and feels reminiscent of the early Strontium Dog stories from Starlord and 1980s 2000AD. It’s great fun to see Johnny interacting with his friends, and Wagner gives them all such distinct personalities that it is enjoyable to just read them bickering with each other. While Johnny Alpha defines Strontium Dog and needed to be brought back, it was his partnership with Wulf, Middenface and the others that really fuels the narrative and I hope that Wagner continues to partner Alpha with other mutants in future stories.

The final adventure in the collection comes from the 2000AD 40th Anniversary Special which was released in 2017, and features an untold tale set before Johnny Alpha’s death. Written by Lauren Beukes and Dale Halvorsen and illustrated by Carlos Ezquerra, the story sees Alpha working alongside Durham Red and it plays upon their complicated relationship established in classic stories like “Bitch” and “The Stone Killers”. It’s a short seven-page episode, but it is extremely well-written and highlights the fun dynamic between the two characters – hopefully this is something that 2000AD will continue to showcase in the future, especially as the character of Durham Red is set to be revamped in an upcoming series by Alec Worley and Ben Willsher.

This is a return-to-form for Johnny Alpha and the Strontium Dog series, and all three stories in this collection will tickle the reader’s nostalgia-bone (it’s right next to the funny-bone!). Carlos Ezquerra is an absolute triumph, and his artwork is able to erase any horrible memories of Johnny Alpha getting impaled “the big flying monster”. With this collection, Wagner puts his best foot forward and gets back to telling brilliant Strontium Dog stories as he was during the revisionary flashback era, but without the constraints of the ‘untold tales’ format. This is a momentous moment for Strontium Dog, finally free from the baggage of “The Final Solution” and able to blaze forwards into new narrative possibilities, and I am chomping at the bit to see where Wagner and Ezquerra take Alpha and the rest of the Strontium Dogs next.

Strontium Dog – “Repo Men” is available in print and digital formats from Amazon and 2000AD’s Webshop.