This month sees Durham Red return to the pages of 2000AD after a six year absence with “Born Bad”, an eight-part storyline which will see the character revamped with a new direction and new costume courtesy of Alec Worley, Ben Willsher and Lee Carter. To celebrate her return and redesign, we have taken a look at her history in the series and how she changed from vampire bounty-hunter to mutant messiah and back again…

Created by Alan Grant and Carlos Ezquerra, Durham Red first appeared in the 1987 Strontium Dog storyline, “Bitch” – as a potential sidekick for Johnny Alpha after his previous partner Wulf had been killed off in the “Max Bubba” story-arc. Like Alpha, Red’s mutation left her looking normal on the surface but she actually had vampiric traits such as pointed teeth and a constant thirst for blood. Shunned by other mutants, she became a Strontium Dog like Johnny and often fed upon her bounties to satisfy her bloodlust. The two would have a more complicated relationship – often blurring the lines between lovers and friends, allies and enemies.

Proving popular amongst fans, she was soon spun off into her own adventure – also by Grant and Ezquerra – which saw the vampire working solo before she was captured and imprisoned on an island. The twelve-episode “Island of the Damned” is one of my fondest stories from the early nineties and the haunting image of the smiley-faced metal sun leering down at a dehydrated and physically-weak Durham Red is one of the more enduring images from the character’s history. Without a doubt, it proved that Red was a strong enough character to headline her own series without the Strontium Dog cast and future adventures from Peter Hogan and Mark Harrison during the mid-nineties continued to develop her as a strong, confident heroine.

Following the death of Johnny Alpha in “The Final Solution”, the Strontium Dog series lacked a strong protagonist – despite the massive push to develop Feral as the new lead – and it instead became an ensemble cast and renamed Strontium Dogs. As the series gradually lost steam, editorial made the decision to formally separate Durham Red from the continuity and had her cryogenically frozen until the far-future (not unlike Fry from Futurama!) – this might have been the final nail in the coffin for Strontium Dogs as the series faded out and was eventually retconned with John Wagner’s return to the character of Johnny Alpha in the Prog 2000 Annual. 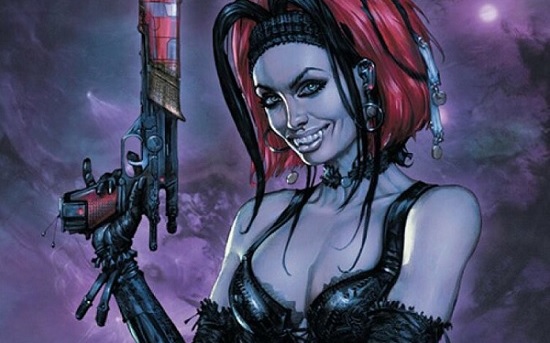 Dan Abnett, fresh from his success with Sinister Dexter, acted as caretaker for Durham Red and developed her new status-quo as the figurehead for mutant rebellion in a war-torn far future. Working alongside Mark Harrison, the pair created a distinctly different universe for Red to inhabit as she took the role of a reluctant mutant messiah, whose return to life had caused inter-planetary war between humans and mutants to erupt. Harrison’s computer-generated art was revolutionary at the time, and Abnett’s script reinvented the character completely. However, it was a drastic reboot for the character and split opinions greatly. Running from 1998 until 2004, the series concluded with “The Empty Suns” and then laid dormant for eight years, aside from a few novels published by Black Flame. Adrift in her own continuity and separated from Johnny Alpha, it seemed like Durham Red was destined to remain a relic of the past (or far-future!).

Following the success of the Strontium Dog reboot and the revisionary stories that took place after “The Final Solution” and resurrected Johnny Alpha, it was inevitable that 2000AD would do the same with Durham Red. In 2012, her creators Alan Grant and Carlos Ezquerra reunited with the character with a ‘back-to-basics’ adventure in the same ‘untold stories’ format. Subsequent stories have appeared in sister publications such as the Sci-Fi Special and 40th Anniversary Special, but this upcoming series from Alec Worley, Ben Willsher and Lee Carter represents the first major storyline for the character since “The Empty Suns” in 2004. Promising to revamp the vamp, preview images seem to indicate that Red will be receiving a new costume and status-quo. It remains to be seen whether this version of Red will be running concurrently with Wagner’s current Strontium Dog series, or whether it will be another ‘untold tale’ set before her trip to the future. I’m hoping for the latter, as Red is one of 2000AD’s strongest female characters and if Tharg and his droids can iron out the continuity issues, it would be great to see her return to the same time period, even if it means classifying the entire Scarlet Cantos era of her series as an urban legend.