This second volume of Charley’s War undergoes a dramatic change in narrative as Pat Mills introduces a secondary protagonist in Blue, a deserter from the French Foreign Legion who was present at the Battle of Verdun. The switch in perspective and use of a “story-within-a-story” format is initially jarring and takes some getting used to – a fact Mills himself recognises in his commentary – but Blue stands out as a distinct and separate character from Charley and allows the reader to see a different story that wouldn’t have been possible from Charley’s point-of-view. Whilst Blue recounts his tale, Mills maintains tension in the present-day by having the pair hunted by the military police and the determined Drag Man, who takes a personal delight in capturing deserters.

While this volume has flashes of the dark comedy that was present in “Boy Soldier”, there is a greater level of maturity and pathos to this particular chapter as Charley returns to the front, serving in Ypres and Passchendaele. It is also interesting to note that the focus shifts away from the Germans as the ever-present threat, and instead it is the callous officials and corrupt superiors whom pose a real danger to Charley. Mills develops Charley’s character wonderfully through the weekly installments, returning to the trenches with a world-weariness and grim experience that is shown in contrast against the conscripts he finds himself side-by-side with. Reading this in a collected form, Mills’ masterful storytelling is clearly on display and it is a genuine thrill to see the plot threads introduced in earlier chapters come to fruition.

There also seems to be a better pace to the adventures in this volume as Mills takes time over multiple episodes to allow events to unfold. There is an operatic feel to the narrative at times as events swell and build up, often resulting in a tragic cacophony of violence. My favourite sequence involves the cruel and spiteful Snell, and how his constant misdeeds and abuses of power eventually result in a dark, brutal confrontation. I won’t spoil what happens here, but it is a brilliant example of sowing the seeds of a storyline and allowing them to bloom naturally before reaping the rewards. It is paced brilliantly, and much like most of the story-arcs within this volume, it has a satisfying conclusion – even if it doesn’t always have a happy ending!

While there are some very powerful moments in this volume, I don’t think there is a scene with the same emotional gut-punch as when Charley carries the bag containing Ginger’s remains through the trenches to bury him. Mills explores the hypocrisy of war and the “enemy within” with military police executing deserters, the foul treatment of conscientious objectors and the complete disregard of human life seen from generals and superiors. Mills knows how to write a villain and the likes of The Drag Man, Oiley and Snell stand out as vicious little swines that deserve a comeuppance. I can only imagine the intense hatred these characters stirred up in the audiences at the time – all these years later, and I still find them to be effectively-written antagonists for our hero. 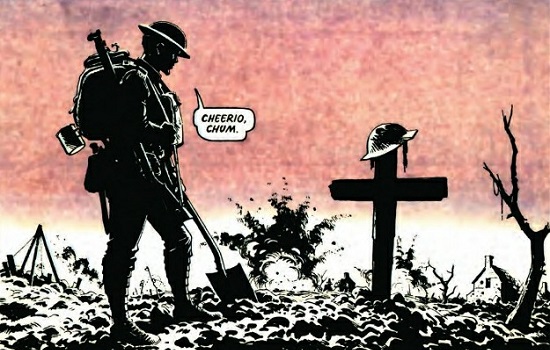 Joe Colquhoun continues to draw his heart onto the page, creating some of the most emotionally-charged sequences ever committed to paper. While this collection features more of Colquhoun’s coloured artwork, I find the black and white sections to be the most emotive and powerful. It is absolutely stunning to read, and coupled with Mills’ biting script, it is almost overwhelming in his stark brutality and I’m amazed that it was able to be published in a children’s comic. That said, it is so important to be read by children to educate them about the first World War and the conditions of trench warfare. Mills’ script is meticulously researched and weaves fact with fiction to create a truly haunting story. I wish I’d been aware of this series when I was studying at school – it is entertaining, educational and challenging. Mills doesn’t make it easy for you as a reader, he puts you through the wringer and leaves you changed for having read the story.

After I’d finished the first volume, I gave it a perfect score, and to be honest, I thought that the second volume would be more of the same and naturally decline in quality. That wasn’t the case at all – not only does Pat Mills refresh and energise his narrative with a switch in perspective and protagonist but the series actually improves over time with stronger pacing and effective antagonists to create drama. Colquhoun’s artwork is flawless, and Mills’ script is so razor-sharp that you would even get paper cuts on a digital copy! If you haven’t read Charley’s War, you are missing out on one of the greatest war stories of all time – that is not hyperbole, it is really that good!

Other reviews for the same series: