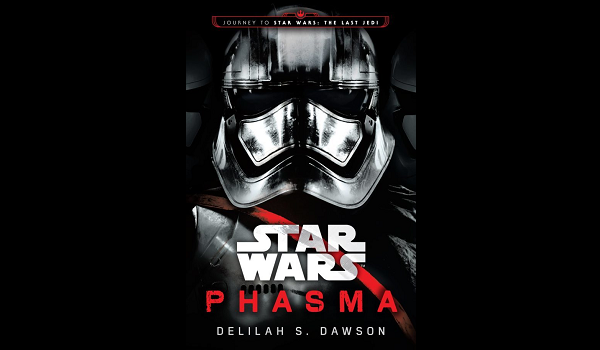 Synopsis: One of the most cunning and merciless officers of the First Order, Captain Phasma commands the favour of her superiors, the respect of her peers, and the terror of her enemies. But for all her renown, Phasma remains as virtually unknown as the impassive expression on her gleaming chrome helmet. Now, an adversary is bent on unearthing her mysterious origins–and exposing a secret she guards as zealously and ruthlessly as she serves her masters.

Deep inside the Battle-cruiser Absolution, a captured Resistance spy endures brutal interrogation at the hands of a crimson-armoured Stormtrooper–Cardinal. But the information he desires has nothing to do with the Resistance or its covert operations against the First Order.

What the mysterious Stormtrooper wants is Phasma’s past–and with it whatever long-buried scandal, treachery, or private demons he can wield against the hated rival who threatens his own power and privilege in the ranks of the First Order. His prisoner has what Cardinal so desperately seeks, but she won’t surrender it easily. As she wages a painstaking war of wills with her captor, bargaining for her life in exchange for every precious revelation, the spellbinding chronicle of the inscrutable Phasma unfolds. But this knowledge may prove more than just dangerous once Cardinal possesses it–and once his adversary unleashes the full measure of her fury.

One of the most intriguing additions to the Star Wars universe to come out of “The Force Awakens” was the mysterious silver Stormtrooper, Captain Phasma. Not only did the character appear in distinctive Chrome armour, but it was also refreshing to see a powerful female villain introduced into the franchise. Unfortunately, little was actually done with the character in both “The Force Awakens” and “The Last Jedi” aside from an ignoble death, which meant she was relegated to that stable of Star Wars characters who look cool, but aren’t developed fully on-screen. As with Boba Fett before her, it seemed that Phasma would be one of those characters better utilised in Expanded Universe (EU) materials and so I was excited to read more about the character in her own novel, “Phasma”.

If you thought “Phasma” was going to bridge the events between “The Force Awakens” and “The Last Jedi”, I need to channel my inner-Luke Skywalker to tell you that “this isn’t going to go the way you think”. While “Phasma” is clearly about Captain Phasma, the structure of the novel is somewhat unexpected and consists mainly of flashbacks to her early life on the desolate planet of Parnassos and how a chance encounter with the First Order gave her the opportunity for a new life in the stars. Somewhat reminiscent of Arabian Nights, the present-day framing device revolves around a captured Rebellion spy who is forced to tell stories about Phasma’s past in order to guarantee her survival. The dual narrative streams complement each other perfectly and the inclusion of present-day framing device works well at injecting a sense of tension into a novel dominated by flashback sequences – I quickly found myself gripped by the events occurring in both timelines, even though Phasma’s fate was already sealed.

Delilah S. Dawson does a terrific job at examining the character of Phasma, easily surpassing the brief glimpses of the Chrome-plated Stormtrooper seen in the films. In fact, Dawson’s take on Phasma as the ultimate survivor explains her quick betrayal of the First Order in the final act of “The Force Awakens” and also provides additional context to her actions in this deleted scene from “The Last Jedi”. Determined to survive at any cost, Phasma’s only loyalty is to herself and this novel demonstrates what an interesting character she could have been on-screen, if only she’d been given more screen-time and backstory. Hopefully, her knack for survival will see her return in Episode IX, or at the very least, some future EU stories. I would happily like to see Dawson revisit some of the characters introduced in this novel for some more adventures.

Dawson also creates a strong cast of supporting characters to populate both timelines, with a troupe of loyal Scyre warriors to accompany Phasma on her perilous journey across Parnassos and the naïve and envious Cardinal, who plots to remove his rival from the First Order. Even though Phasma is the core focus of the novel, what we learn about her comes mainly from the perspective of other characters and how they perceive her. To this end, Dawson plays with the notion that Phasma’s face always being hidden beneath her mask and her Stormtrooper helmet, using it as a way to obscure the character’s true motivations from her closest allies as well as to maintain her mystique for the reader. She is such a fascinating villain – intent on reinventing herself again and again to fit into her surroundings – that I refuse to believe that her story ends in “The Last Jedi”.

The novel also provides a more in-depth look into the Stormtrooper training program and how the First Order snatches infants from a young age to indoctrinate them. Cardinal and Phasma work at opposite ends of the scale – with Cardinal training the younger cadets and ironing out their rebellious nature to ensure compliance and Phasma turns them into emotion-less killing machines – although we know from “The Force Awakens” that her attempts fail with Finn, and ultimately this leads to her demise. Even knowing that Phasma will eventually be undone by her greatest failure doesn’t reduce the level of tension and excitement throughout the book. Dawson keeps the plot moving briskly across both narratives in order to keep readers engaged throughout – the switch in perspective helped keep the story fresh and I loved how she used non-linear storytelling at times to produce some shocking reveals that force the reader to re-evaluate everything they thought they’d known before.

While the novel is badged under the “Journey to The Last Jedi” banner, it actually takes place ahead of “The Force Awakens” and would have benefitted by being released before, or shortly after, that film. It’s association with “The Last Jedi” serves to remind readers of Phasma’s ultimate fate, and how cheated they should be that she didn’t get an opportunity to shine. Despite the focus on Phasma and Parnassos, Dawson does bridge some of the unexplored area between “Return of the Jedi” and “The Force Awakens”, especially in regards to the hierarchy of the First Order and the relationship between Brendol and Armitage Hux. It never feels like an information dump and flows naturally into the narrative, but keen-eyed fans of continuity will notice connections, and begin to piece together the events that occurred between sagas.

“Phasma” is a hugely enjoyable character study of one of the more enigmatic villains of the Star Wars universe, revealing the hidden motivations beneath the mask. Those who already love the character will find plenty to enjoy here as Delilah S. Dawson develops her into a credible threat in a way that the movies never did. Cunning, vicious and driven to survive, Phasma has plenty in common with Boba Fett, and unsurprisingly she has followed in his footsteps and become one of the more popular supporting characters in the new trilogy – her action figure was the biggest selling merchandise on Amazon.co.uk in December 2015. This novel goes some way to rectifying some of the mistakes that were made with the character, and actually does her justice by making her into a fierce, independent woman.

“Phasma” is essential reading for Star Wars fans, creating a fascinating backstory for the character that deserves to sit in every fan’s head-canon.

Star Wars – “Phasma” is available in hardcover and paperback from Amazon or as a digital eBook on Amazon Kindle.