Following a jaunt into the Phantom Zone with Batgirl, this third volume of Supergirl returns the focus back to the Girl of Steel by picking up on plot threads established in the first volume, “Reign of the Cyborg Supermen”. The long-running subplot involving the Emerald Empress and her desire to punish current Kara for future Kara’s crimes comes to a head as she forms an all-new ‘Fatal Five’ to discredit and disorient Supergirl. What transpires is an effective dismantling of the status-quo established in the series’ first issue with Supergirl’s role in the DEO and National City uprooted by the Emerald Empress’ actions. Steve Orlando’s script is fast-paced and by pitting Kara up against five super-powered antagonists, the stakes are raised higher than ever before as Supergirl fights a battle she cannot win.

This volume feels darker in tone when compared to its preceding chapters, both due to the more destructive nature of the subject matter and the changes in art team. Brian Ching, whose art brought a light-hearted anime style to the book in the first two volumes, has been replaced by Robson Rocha as lead artist on the series. Rocha’s more grounded art style highlights Supergirl’s maturity and imbues each panel with a gritty realism that was sometimes missing in Ching’s more colourful panels. Rocha manages to capture the expressive emotions at work during the story, emphasising the drama and tragedy as Kara’s world begins to crumble around her. Paired with Orlando’s script, Rocha’s art really makes those story beats count, leading up to that dramatic finale with the Cyborg Superman.

I really love the way Orlando has Supergirl fighting on two fronts against the Fatal Five. Not only does she have to fight them physically, but they are also waging a war against her reputation in an attempt to destroy all the goodwill she has built up as a superhero. Fighting against her enemies using both her brains and her brawn, Supergirl finds herself stretched thinly and there is a sense of grim inevitability about the ending. I love stories like this that challenge the status-quo, and while Orlando could easily have maintained the same format established in the first volume for years to come – he quickly tears it up and forces his heroes out of their comfort zone. The final story of this volume does offer some temporary respite for Supergirl as she learns to control her new-found abilities with the help of the New Superman, but there is the sense that won’t be a ‘quick and easy fix’ for the rest of her problems.

While this volume may prove difficult for new readers to jump into, it is extremely satisfying for long-term fans of the series as it threads the various subplots of the past volumes together to create a rich tapestry. The seemingly disparate plots (Lar-On, the DEO, the Emerald Empress, the Cyborg Superman and Cat Grant) from previous issues of the series slot together seamlessly to establish a grim future for the Girl of Steel, and it is very rewarding as a reader to see the bigger picture form over time. This volume represents a loss of innocence and naivety for Supergirl as she is faced with injustice and the fickle nature of humans. It brings to mind that iconic quote from Harvey Dent in The Dark Knight – “You either die a hero, or live long enough to see yourself become the villain”. 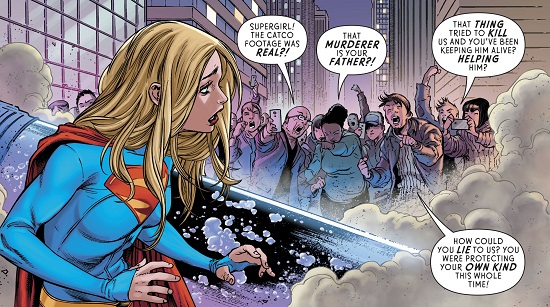 There is an Empire Strikes Back vibe to the ending of the “Girl of No Tomorrow” arc, as things are left unresolved and our heroes are scattered and on the back foot. The final adventure with the New Superman character feels a bit inorganic and an attempt to promote and showcase a different series. While it does address the issue of Supergirl’s enhanced powers, it is an awkward tonal shift and doesn’t quite ring true with the rest of the graphic novel. While it might have more significance down the road, it just felt like an attempt to lure readers over to the New Superman series. As a DC Comics reader who is only reading Supergirl at the moment, I prefer the series to stand on its own and the attempts at cross-promotion and reference to other series’ events often irritate rather than intrigue.

Overall, “Girl of No Tomorrow” was a fantastic read, filled to the brim with action set-pieces that leap off the page. Robson Rocha’s artwork is tremendous and while the shift in tone from Brian Ching’s artwork may be jarring to some, I found it a refreshing change and totally suitable for the story’s subject matter. If this storyline had been illustrated by Ching, it would have lost out on some of the drama and emotion that Rocha’s art brought to the table. Steve Orlando is clearly having great fun on this book, I mean – it’s not everyday you get to have a giant Solomon Grundy clone fighting Supergirl on the streets of National City – and while the initial status-quo borrowed plenty of elements from the Supergirl TV show, he has definitely established his own identity for the series. Tearing up the rule book and putting Supergirl through the wringer, Orlando has made this series unpredictable and exciting and I cannot wait to see where he takes Kara Danvers next!

Supergirl: Vol. 3 – “Girl of No Tomorrow” is available in all good comic-book stores, as well as online at Amazon. Digital copies are available through the DC Comics app or directly through Comixology and Amazon Kindle.