A modern classic in every sense of the word, “Mandroid” is the first in a new range of ‘digest’ graphic novels from 2000AD, offering bite-sized and affordable standalone stories that showcase the very best of the galaxy’s greatest comic. Initially printed in 2005, “Mandroid” focuses on Nate Slaughterhouse – an injured war veteran whose reward for his service is to spend the rest of his life encased in a metallic body of advanced prosthetics and plastic skin – as he returns to civilian life in Mega-City One alongside his wife and child. While Judge Dredd is a presence here, the story unquestionably belongs to Nate allowing John Wagner to explore the injustices that are part and parcel of living in Mega-City One.

Slaughterhouse’s attempts to reintegrate into civilian life mirrors the difficulties seen from many real-world injured war vets, as he struggles to adapt to life off the battlefield. His injuries and ‘mandroid’ armour isolate him from others on a physical plane, whilst his PTSD and difficulties coming to terms with his injuries cause him to become distant from his wife and child. Wagner handles this storyline with maturity and sensitivity, presenting Slaughterhouse as a sympathetic figure and a victim of circumstance. As events begin to escalate, and Dredd becomes involved, Wagner maintains that degree of sympathy and even Dredd himself emphasises with Slaughterhouse’s situation, even though the two seem destined to collide. In this respect, “Mandroid” feels like the Judge Dredd version of Heat with Dredd and Slaughterhouse inhabiting the De Niro and Pacino roles – two strong personalities that are inevitability drawn together into conflict. 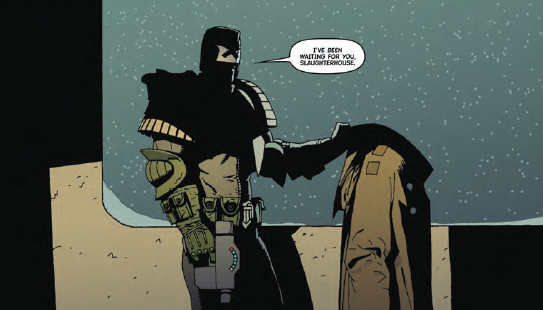 “Mandroid” shares a lot of thematic similarities with “America” – the iconic early-nineties Judge Dredd storyline which saw the series shift into mature storytelling for the first time. Both stories relegate Dredd to a supporting character role, focusing instead on a tragic figure whose ambitions are at odds with the Justice Department. While America Beeny fights for independence away from the Judges’ rule, Slaughterhouse actually fights for stronger rule and punishment against criminals, adopting a Punisher-esque vigilante crusade. There is even a similar art style, with Kev Walker’s amazingly atmospheric panels capturing the same feel as Colin MacNeil’s work in “America”. I love the use of shadows and darkness in Walker’s work, and he does a brilliant job at capturing the underbelly of Mega-City One that swallows up the Slaughterhouse family, leaving nothing left but vengeance. That panel with Dredd waiting in Slaughterhouse’s room as the pair finally come into conflict is astounding, and emphasises the tension beyond belief.

The sequel, “Instrument of War” was released two years later in 2007, and picks up Nate Slaughterhouse’s story in real-time. To say too much of his situation would be a spoiler, but this second story is more action-driven than its predecessor and loses some of the subtext and emotional impact that was found in the original. This is in part down to the switch in artists as Simon Coleby and Carl Critchlow take over from Kev Walker in this chapter, delivering a more explosive conclusion to the “Mandroid” saga. Slaughterhouse remains a tragic figure, but where his initial tragedy stemmed from the indifference endemic to Mega-City One, this time around he is being manipulated by others. Ultimately, “Instrument of War” offers readers a satisfying conclusion and ties up some of the loose ends remaining at the end of “Mandroid”, although it doesn’t quite reach the heights of brilliance of its predecessor.

I love these stories where Dredd is off-centre to the main action, separated from the reader but still a driving force behind the narrative. By creating this distance, Wagner forces the reader to re-evaluate their thoughts on the character who often straddles the line between hero and villain, protector and fascist. Nate Slaughterhouse is given an impressive amount of depth and character-development, and Wagner clearly enjoys exploring the moral ‘can-of-worms’ that he opens up here. With its reduced attention on Dredd, “Mandroid” is ripe for adaptation in the upcoming Judge Dredd: Mega City One TV series, which is expected to be more of an ensemble cast rather than a strict focus on Dredd himself.

It is no surprise that “Mandroid” was chosen to kick off 2000AD’s Digest Graphic Novels line, as it is a recent high point of storytelling in Judge Dredd’s world. For decades now, “America” has been the go-to recommendation to showcase the brilliance of Judge Dredd, but “Mandroid” offers a more contemporary and more accessible entry-point for readers new to 2000AD and Judge Dredd. Filled with more humanity than you would expect from a story about a cyborg soldier, “Mandroid” is the perfect gateway drug to a nirvana of Judge Dredd enjoyment. As I said in my opening paragraph, it is the very definition of a modern classic. If you never got the opportunity to read “Mandroid” the first time around, it is well worth picking up in this awesome new digest format. Next up in the series is the bonkers “Zombo” – another modern classic that deserves wider recognition.

Judge Dredd: Mandroid is available in print and digital formats from Amazon and 2000AD’s webshop.