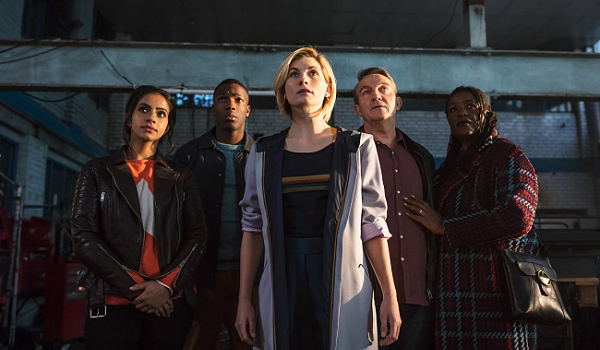 “The Woman Who Fell to Earth”
Doctor Who: Series 11 – Episode 1
Written by: Chris Chibnall
Directed by: Jamie Childs

Synopsis: In a South Yorkshire city, Ryan Sinclair, Yasmin Khan and Graham O’Brien are about to have their lives changed forever. A mysterious woman, who is unable to remember her own name, falls from the night sky. Can they believe a word she says? And can she help solve the strange events taking place across the city?

Quite possibly the most important episode of Doctor Who since “Rose” relaunched the series in 2005, “The Woman Who Fell to Earth” had the unenviable job of rebooting the franchise with a complete new cast, as well as the added challenge of introducing the first female incarnation of the Doctor. I’ll admit that when Jodie Whittaker was announced as the Thirteenth Doctor I was unsure whether it was the right decision, and the traditionalist in me worried that it ruin the tone of the series by having the Doctor become female. Then the more I saw pictures of Whittaker in costume, and short scenes of her in the role and interacting with schoolchildren in pre-episode publicity videos, I was convinced that she was the right choice. She brings the same quirky, alien persona to the role that her predecessors did, but with a fresh energy that comes from being female.

As with any regeneration episode, the Doctor is in a state of turmoil and I was glad that the issue of her gender-switch didn’t dominate the episode in the same way it has dominated timelines and news articles. Again, one of my fears was that her change in gender would become a political statement, or fodder for cheap jokes and Chris Chibnall’s script does neither – brushing it aside with a few comments. This isn’t a weaker version of the Doctor – there are definite echoes of Eccleston, Tennant and Smith’s performances under the surface fusing that youthful energy with an earnest, emotional core. Arguably, the Thirteenth Doctor shares more in common with the Tenth, although it always takes a few episodes for the nuances in the actor’s performances to come to life. Whittaker is clearly having fun in the role, and I love the way she pulls uncertain faces as she improvises a plan. One episode in, and she has won me over completely… 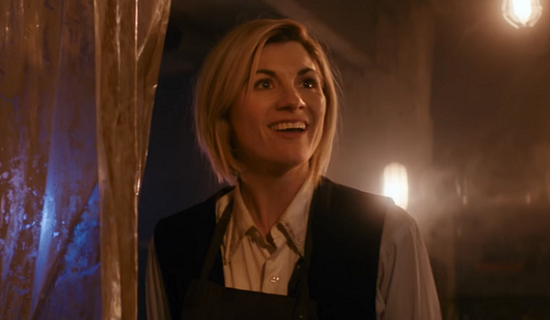 Earth-bound, and grittier than usual, this opening episode demonstrated the more cinematic style of Doctor Who – especially when compared to “Rose” and “The Eleventh Hour” – two other episodes which had blank slates and acted as “reboots” for the series. I watched this episode with my wife, who had never watched an episode of Doctor Who, and she followed the plot and didn’t feel out of her depth. Something I doubt I would have been able to say with any of the episodes from the past few years – while some might not like the “back to basics” approach, there is no denying that the production team have sparked new life into the series and made it much more accessible than ever before – something that is vital if it wishes to last for decades to come. As much as I liked aspects of Steven Moffat’s run on the series, it is hard to argue that the series had moved away from its core child demographic into a series targeting hardcore science-fiction fans. While “The Woman Who Fell to Earth” was scary and unnecessarily brutal at times, I still think that kids could watch it (from behind the sofa, naturally) and enjoy it. It will be interesting to see whether Chibnall can maintain this inclusive, accessible tone throughout the whole series.

Aside from its female lead, I was also struck with how inclusive and ethnically diverse the cast was. Now, I’m not from Sheffield so I don’t know if this accurately reflects the population but it was refreshing to see people of colour appearing in both important and supporting roles. Looking at the list of guest stars for future episodes, it looks like we will see more examples of cultural diversity going forward, which can only be a good thing. The universe is a big place, and I’m glad Doctor Who is finally showcasing everyone that lives within it. 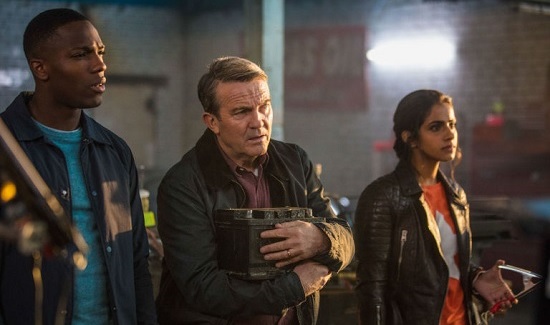 The new TARDIS team is an eclectic bunch of characters, and this opening episode did a great job at introducing them all. Unfortunately, the promotional materials effectively painted a target on one character’s back as they were not featured in any of the posters and trailers, and their death seemed unnecessary – much like most of the violence that occurred in this episode. Chibnall’s script seemed to pull at the heartstrings by fleshing out the characters before he killed them off – one notable examples was the grandfather saying goodnight to his granddaughter before meeting a gruesome end. Given the brutality and senseless nature of the violence, I suspect that this series might be a bit raw around the edges and we might have some more moments that require tissues by the side of the sofa.

The realism of the episode was something that took me surprise, and there was plenty of relatable human drama nestled amongst the aliens and action set-pieces. Ryan, with his dyspraxia, demonstrated that the companion’s journey doesn’t need to involve science-fiction elements and can actually be as personal as learning how to ride a bike. Yaz, the cop with an appetite for more, also felt fully-realised and a strong role model for young girls to idolise. Even, Graham, the awkward step-grandfather and cancer survivor, was rooted in realism rather than having a backstory that involved time-travelling children, alien biologies or schemes to trick the Doctor. He was just a bloke. After years of “special” companions, it is refreshing to see these ordinary people in the role and whether they grow into super-capable adventurers or not, I hope Chibnall maintains this focus on human drama over plot devices. 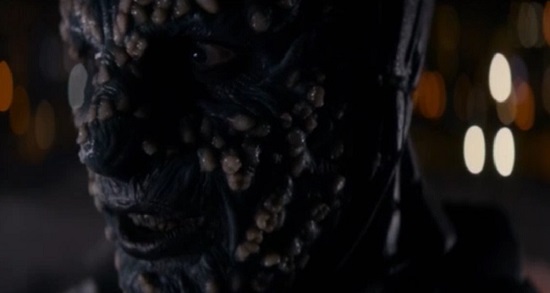 And onto the villain – who else thought that the monster was a Cyberman when he emerged from the glowing blue Hershey Kiss? I have to admit that I was a bit disappointed when it turned out to be some weird robot thing, although the unmasked visual of the teeth embedded in his face was brilliant, and got a strong reaction around the dinner table. My wife didn’t realise they were teeth and thought he had ticks and maggots on his face! Once unmasked, the “Tim Shaw” alien was more interesting, although the plot was effectively a PG-13 version of Predator 2 – swapping the removal of spinal cords for teeth. That said, it was a strong palate cleanser and definitely felt tonally different from the previous Doctor’s adventures – in fact, it felt a bit Torchwood in nature. Not entirely surprising since Chris Chibnall was one of the lead writers on that show.

There were some bits of the episode that didn’t quite gel with me – I would have liked to have seen the TARDIS, but that’s mainly me being impatient. I’m sure we’ll get the big reveal of the new interior next episode! And, I wasn’t entirely convinced that the Doctor could build a sonic screwdriver out of some spare parts – not to mention, the tracking device at the end of the episode. Minor nitpicks, but overall, the episode was free from any major plot holes and flowed along nicely. Not quite as magical as “Rose” or “The Eleventh Hour”, but definitely a worthy introduction to a new Doctor and a new era.

Surprisingly low-key and rooted in realism, “The Women Who Fell to Earth” offered a more grounded take on the regeneration episode, literally bringing the Doctor crashing down to Earth. Less campy in nature, this new era seems to be focused on engaging new audiences and telling dramatic stories as opposed to riddles wrapped in conundrums. This is the jolt in the arm that the series has needed, and while I imagine there will be vocal segment of “fans” who will hate the changes – I, for one, am glad that “the rules” have been broken. The Thirteenth Doctor is finally here, and as the publicity team have repeatedly said, “it’s about time!”

Next Episode – “The Ghost Monument”
Still reeling from their first encounter, can the Doctor and her new friends stay alive long enough, in a hostile alien environment, to solve the mystery of Desolation? And just who are Angstrom and Epzo?