“Demons of the Punjab”
Doctor Who: Series 11 – Episode 6
Written by: Vinay Patel
Directed by: Jamie Childs

Synopsis: India, 1947. The Doctor and her friends arrive in the Punjab, as India is being torn apart. While Yaz attempts to discover her grandmother’s hidden history, the Doctor discovers demons haunting the land. Who are they, and what do they want?

“Demons of the Punjab” is the first episode of Season Eleven to not be written, or co-written, by Chris Chibnall as Vinay Patel handles scripting duties alone. Despite this change in writer, the episode feels tonally similar to the preceding ones, hitting that sweet spot of human drama and science fiction. As with “Rosa”, this episode sees the Doctor and her friends travelling back to a time of racial conflict and division as they arrive in 1947 India during the Partition – a time of upheaval that resulted in up to two million deaths and over fourteen million displaced from their homes. This is a period of history that wasn’t taught to me in school, and it is great to see Doctor Who visiting these uglier moments in history to showcase the bits that aren’t in the curriculum. While “Rosa” was centred on the people and the pressure cooker of circumstances that came together to produce a defining moment in history, “Demons of the Punjab” instead focuses on the fallout of one of these moments and how ordinary lives are swept up and irreversibly changed by them.

As with the other episodes in this series, the action quotient does feel slightly lower this year than it has in previous years, but the character drama is so powerful that it remains extraordinarily engaging. I was unsure what to think when I read the initial synopsis of this episode, and I half-expected to see an Indian-themed variation of Back to the Future, with Yaz having to play matchmaker to ensure that her own existence is guaranteed, but “Demons of the Punjab” subverts that typical narrative and actually has you rooting for Prem and Umbreen’s marriage, even though it means that Yasmin won’t exist. As with “Rosa”, the science-fiction element of the story is largely academic and it could have easily been written as a pure historical with human antagonists. That said, I loved the twists and turns in the narrative and the confusion over who was friend and foe. Without the Thijarians, the story would have lost this element.

The Thijarians might not go down in Doctor Who lore as the most memorable of alien species, but I did love their practical design, especially after the CGI spiders and Pting of the past few episodes. I have a bit of a soft spot for rubber-masked monsters, and their tusked faces and multitude of eyes gave them a sinister look. I also liked the Asian influences of their clothing, and the spiked shoulder pads – again, creating a sinister assassin look that would play into the actual plot. Considering Chris Chibnall’s decision to create all-new monsters for his all-new Doctor, none of these creations have earned a repeat appearance – apart from maybe the Pting. With such a focus on the human drama, it does feel like the monsters are lacking in a “wow factor” and have been rather forgettable. This is probably the area which needs the most work because aside from the mutant spiders, none of the episodes have been built up around the alien threat – they always seem secondary to the drama that is happening and as a result, are largely interchangeable. With four episodes remaining, I’m hoping that we get a really strong alien antagonist that stands out from the crowd – even if it is more Slitheen than Weeping Angel.

After five episodes standing in Ryan and Graham’s shadow, this episode gives Yaz a bit more screen time and an opportunity to emote – while Mandip Gill does a great job at attempting to reconcile her own memories of her Nani with the realities before her, it doesn’t really develop her own character in any meaningful way. The epilogue where she reconnects with her older Nani and demonstrates an understanding of her tough life, and her decision to keep her to herself was a nice character moment but I couldn’t help but wish that Umbreen revealed that she knew that her niece had somehow travelled back, and gave some recognition of that shared moment. It would have been a lovely little wrap-up, and enhanced the story so much more. As for the other characters, Jodie Whittaker continues to feel more and more like the Doctor – particularly in the sequence where she confronts the Thijarians in their ship and discovers their true agenda. Meanwhile, Ryan occupies Yaz’s traditional spot and supplies the odd one-liners, although “Bagsie, not chicken poo” got the biggest laugh from me in the whole episode, and Bradley Walsh’s Graham continues to nail every emotional moment he gets. 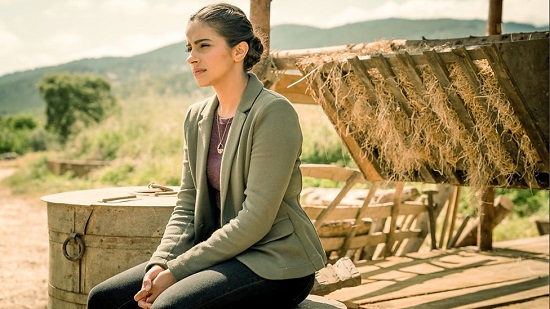 “Demons of the Punjab” sits alongside “Rosa” as an example of ‘grown-up’ Doctor Who, and the power of using fiction to educate. While I am fond of seeing robot pepper-pots shouting “Exterminate” and mannequins coming to life and attacking shoppers, I also like the way this current series is challenging our expectations – both in terms of the stories it wants to tell and the way it tells those stories. The episode is reminiscent of “Father’s Day”, in as much as it requires death to ensure the timeline is maintained, but “Demons of the Punjab” feels so much more brutal and real – both in terms of the script and the performances. It was also interesting to see the parallels between the partition of India and some of the events occurring in the world now, such as Brexit and Trump’s Wall. This populist attitude has been seen time and time again in the past, and it is the uglier side of humanity – this desire to exclude, segregate and separate. Chibnall touched upon this in “Rosa” and Patel revisits the idea again here in “Demons of the Punjab” – demonstrating the importance of inclusivity and acceptance as a way forward.

“Demons of the Punjab” was another fantastic example of how to educate children about historical events, and I think that teachers should really include these episodes in their classes as a way to stimulate conversations about these topics. As a thirty-something, I actually learnt something new here and I’d like to find out more about the partition as the episode didn’t go too in-depth into the reasons and the aftermath. Arguably, this episode was more powerful than “Rosa”, although I think both are equally as important episodes for the series’ growth and evolution. The only reasons it misses a full five stars were because the action scenes weren’t that dynamic, and I think there was a missed opportunity to show that Umbreen had remembered her granddaughter’s presence – maybe explaining why she gave her the watch in the first place?

Still, despite those minor quibbles, this was another brilliant episode. It seems that historicals are definitely the stronger format under Chibnall’s watch, but hopefully the remaining four episodes will see some equally strong contemporary and futuristic stories to round out the series.

Next Episode – “Kerblam!”
A mysterious message arrives in a package addressed to the Doctor, leading her, Graham, Yaz and Ryan to investigate the warehouse moon orbiting Kandoka, and the home of the galaxy’s largest retailer, Kerblam.