Synopsis: On the planet of Ranskoor Av Kolos, a battlefield, a conflict-scarred survivor, and a deadly reckoning await the Doctor, Ryan, Yaz and Graham.

Despite starting off rather slow-paced and small in scale, “The Battle of Ranskoor Av Kolos” picked up momentum and eventually upped the ante to provide viewers with the high stakes and inter-planetary peril that is often associated with a Doctor Who series finale. The plot itself felt reminiscent of the Season Four finale, “The Stolen Earth / Journey’s End” with the notion of planets being taken from their origin places, and the Doctor even referenced that classic episode when she mentioned towing the Earth using her TARDIS. While there were moments of extreme tension and world-shattering drama, it was actually the smaller conflicts and vendettas that fuelled the episode and generated the best moments of the episode.

The episode saw two returning threats from the season make reappearances: Tim Shaw and the Sniperbots. While they weren’t the most interesting of villains, their returns helped ‘book-end’ the season and demonstrate the journey that the Doctor and her companions had been on during the ten episode run. Arguably, Tim Shaw was a much more interesting character this time around – although he had been massively depowered compared to his Predator-esque behaviour in “The Woman Who Fell to Earth”. He seemed much more menacing when he was just talking, rather than ‘insta-killing’ everyone he came into contact with. It was great to see him get his comeuppance after his unsatisfying escape, and for Graham and Ryan to be the ones to do it. With the Sniperbots also making a second appearance, I started to think that we’d see more enemies from the series make a return – even going so far as to theorise that the mysterious clear containers were housing Ptings. 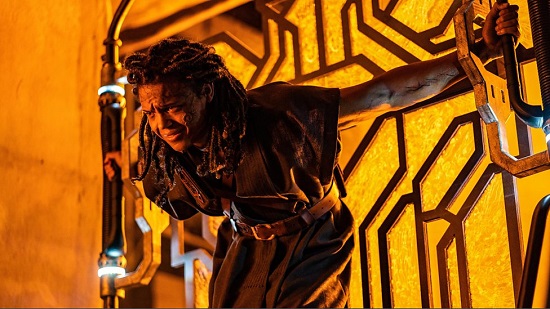 It was great to see Jodie Whittaker take on a world-ending threat and this episode really demonstrated how far she has come in the role of the Doctor. The whole business about gender has been barely a footnote in her stories, and she inhabits the character of the Doctor completely – coming in as a mix of Eccleston and Tennant. One of the best scenes for me was the moment between her and Graham, when he confessed his intention to kill Tzim-Sha if he got the opportunity to do so. It was interesting to see some conflict between this well-oiled TARDIS team and I was worried that Graham would end up doing something he’d later regret. While we did get a moment between Ryan and Graham at the end of “It Takes Us Away”, Chris Chibnall took things further and had these two characters finally connect properly – even doing the fist-pump that had been long teased. Again, it was a brilliant book-end to the character’s journey from the start of the series. Bradley Walsh and Moisin Cole have been utterly fantastic additions to the TARDIS, really delivering some meaty character moments and realistically portraying grief in the Doctor Who universe.

Unfortunately, the focus on Graham and Ryan meant that Yaz was once again sidelined and used as a spare part in the narrative, accompanying Paltraki and then the Doctor on their quests, but providing little input. This is a terrible shame as Mandip Gill is a terrific actress and she has had some great moments in the series, but ultimately it seems like the writers aren’t actually sure what to do with her. We’ve seen hints of a romantic attraction between her and Ryan, but it seems like the writers have been reluctant to develop this – maybe because it seems like a cliché or for fear that it might undermine Yaz’s role as an independent woman. Personally, I think they work well as a couple, and I would love to see the story move in that direction, however, she definitely needs to be given something to work with. It seems like having three companions in the TARDIS long-term does mean that some of the character’s sit in the shadows – maybe next year, we could rotate the companions to ensure they get more exposure. Maybe an episode with Yaz and Ryan, or Ryan and Graham, or just Graham, etc.

Following on from “It Takes You Away”, this episode was another instance where the science-fiction led the drama, and some of the science was a bit iffy at times. It seemed like Chibnall created things to cover up plot holes – oh, the planet has a psychotropic atmosphere because I need my native protagonist to have amnesia when he meets the Doctor. There was a moment where Yaz and the Doctor removed their neural implants, which protected them from the psychotropic atmosphere, and it barely affected them. It just felt tacked onto the script to service the narrative. I also am not a fan of the TARDIS being used as a instant solution to the problem, and while Chibnall cutely referenced previous examples of the TARDIS being the cure-all, it didn’t make it any less lazy an ending. Ultimately, i’d have preferred a much smaller-scale conflict which emphasised the dramatic tension between Graham and the Doctor. Especially since most of this season has focused on human-led drama instead of sci-fi led drama.

Ultimately, “The Battle of Ranskoor Av Kolos” was a solid conclusion to the season, providing emotional catharisis for both the characters and the viewers after the unsatisfying ending of “The Woman Who Fell to Earth”. Hopefully that’ll be the last that we see of Tzim-Sha and the Stenza as, aside from the personal connection with Graham and Ryan, they haven’t been the most inspiring of aliens. Still, I appreciated Chris Chibnall’s desire to reinvent the Doctor Who mythos and introduce new threats and monsters instead of relying on familiar foes – some of them were quite good (Pting, Flesh Moths, Morax) whilst some were a bit more average (Sniperbots, Stenza, Mutant Spiders). The post-episode tease for the New Years episode seemed to heavily suggest the return of the Daleks, and I certainly hope that Chibnall does deliver on that promise – but I also wouldn’t be shocked if he was trolling us either. A Dalek New Year would be a great episode, and I think us fans have earned the opportunity to see the Thirteenth Doctor tackle a recognisable foe.

On the whole, this has been a fantastic season that has really stretched the boundaries of Doctor Who – while some complain that it has become overrun with SJWs and political correctness, I think it has instead become more inclusive and accessible to new viewers. My wife has watched the series and enjoyed most of the episodes, and I think that has nothing to do with the gender of the Doctor – the show needed a fresh start, and this was it. The series has always been about regeneration and reinvention, and this era is just as valid and exciting as those who preceded it – and most brilliantly of all, we don’t know where the journey is going!