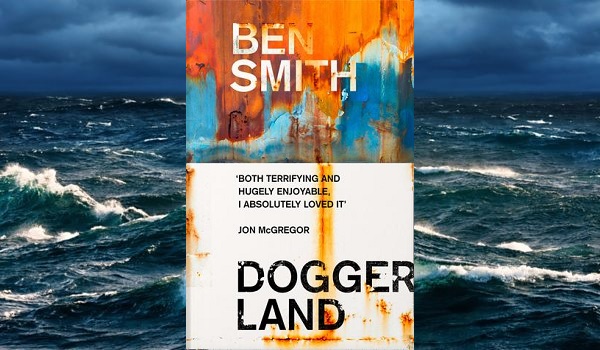 Synopsis: In the North Sea, far from what remains of the coastline, a wind farm stretches for thousands of acres. The Boy, who is no longer really a boy, and the Old Man, whose age is unguessable, are charged with its maintenance. They carry out their never-ending work, scoured by wind and salt, as the waves roll, dragging strange shoals of flotsam through the turbine fields. Land is only a memory.

So too is the Boy’s father, who worked on the turbines before him, and disappeared. The Boy has been sent by the Company to take his place, but the question of where he went and why is one for which the Old Man will give no answer. As his companion dredges the sea for lost things, the Boy sifts for the truth of his missing father. Until one day, from the limitless water, a plan for escape emerges…

Set in the near future where the majority of land has been covered by water, Doggerland is a tale about isolation in the face of adversity. Enlisted to work on a wind farm in the North Sea by the mysterious company, The Old Man and The Boy perform maintenance repairs upon the thousands of turbines that envelop the dilapidated rig that they call home. The cataclysmic events that led to this new world order are hinted out throughout the novel as events are focused on the odd couple as they attempt to live together and deal with the intense loneliness and monotonous routine of off-shore life. Ben Smith really gets to grips with his characters in this debut novel, creating tension between the Boy and the Old Man as the pair begin to have secret agendas.

While the plot moves at a measured pace due to the nature of the job the two perform, Smith’s masterful narrative ensures that the reader is engaged throughout. There are some brief moments of conflict, but the enjoyment comes from the secretive actions of the characters and their attempts to outsmart each other. The story is told from the perspective of ‘The Boy’ predominately, and we discover that he is only aboard the rig because of his father’s actions. Some of the most compelling sequences are the moments where The Boy comes across evidence of his father’s existence and the emotional impact it has upon him. Smith keeps the audience guessing about the relationship between The Old Man and The Boy’s father, and this fuels some of the suspicion that drives the story along.

Plot-wise, this book reminded me a lot of Desmond Hume’s storyline from Season Two of LOST. Washed up upon the island, he must push the mysterious button within the hatch and is unable to leave, or else there will be grave consequences. He initially works alongside a co-worker, but both men wish to escape their “prison sentence” and conspire against the other. Smith really gets to grips with that idea of responsibility in his novel, as both men are obligated to stay in their roles but strive for freedom. There’s some wonderful revelations towards the end of the novel that puts some of their actions into perspective, and results in a cathartic conclusion.

Smith really captures a sense of remoteness with his descriptions of the rig and its surroundings, keeping action centred on the rusting metal locations to evoke claustrophobia. It’s an effective technique, and results in an extremely cinematic tone to the novel. I could easily picture this as a two-hander film with a grizzled old actor paired off against the likes of Michael Cera, or one of his peers. The novel has received comparisons to Waiting for Godot, and it is easy to see why as it is a brilliant examination of the relationship between two characters in an intense situation. Perfectly paced from beginning to end, Doggerland is a post-apocalyptic novel unlike any other I have read, providing a grimly realistic vision of a world ravaged by global warming and rising tidal levels that is slowly rusting away into the oceans.

Doggerland is an exceptional debut novel that deals with concepts such as loneliness, paranoia, dedication to duty and the fear of freedom. Its characters are rich and complex, and enjoyable to read about. It’s difficult to define the book under one genre, but it stands out on its own merits and rewards loyal readers with a surprisingly emotional journey of growth and understanding. Those wanting a more subdued and cerebral take on the aftermath of global warming will find lots to like here, as Ben Smith crafts a solid and thoughtful novel set in a slowly drowning world.

Doggerland is available as an eBook from Amazon Kindle, or collected in hardback format on Amazon and all good bookstores.