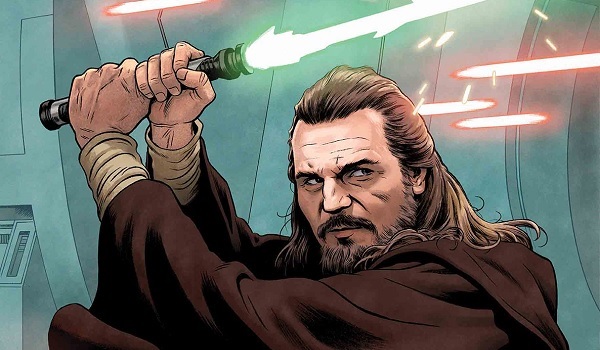 Presented as an independent and rebellious element within the Jedi Order, it is Qui-Gon Jinn’s questioning of the institution and its rules that led to Anakin Skywalker becoming a Padawan at a late age, thereby putting him on the path towards his destiny. This single-issue story explores Qui-Gon’s doubts about his role as a Jedi, and his desire to achieve a harmonious balance between the Light and the Dark – something that foreshadows his interest in Anakin in “A Phantom Menace” as the prophesied chosen one. Jody Houser’s script captures the stoic personality of Qui-Gon, brought to life on screen by the effortlessly cool Liam Neeson, and delves into the philosophical aspect of the character. An outlier within the council, Jinn’s later decisions are what ultimately shape the fate of the galaxy, and it is great to see the character examined in greater depth here.

Cory Smith does a tremendous job with the art in this issue, accurately portraying the characters as seen in the movies, whilst imbuing the action scenes with fluid and graceful movement. I was particularly impressed with his take on Yoda, which arguably looks better than the CGI used to portray the character in “A Phantom Menace”. Smith’s pencils are beautifully supported by Walden Wong’s inks and Java Tartalgia’s colours, which give the issue a vibrant quality – especially during the meditation scene where Qui-Gon considers the Dark Side. Whilst the story is enjoyable, it does feel somewhat constrained by the single-issue format, and it would have been nice to get a resolution to the warring Wood and Metal clans of Bri’n. I found this an enjoyable prelude to Qui-Gon’s soul-searching and was disappointed that it didn’t get a firmer ending. Overall, this was a great glimpse into one of the more overlooked Jedi in the Star Wars franchise, offering context and motivation behind his galaxy-changing actions.