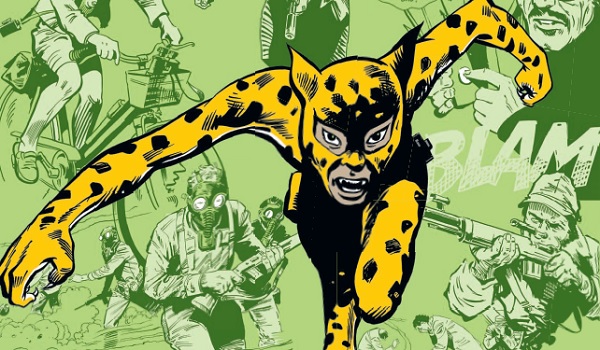 This Graphic Novel collects the following The Leopard from Lime Street stories:

After absolutely adoring the initial volume of The Leopard from Lime Street upon its release in July 2017, I was eagerly anticipating more adventures from Billy Farmer and his superhero alter-ego, and Volume Two doesn’t disappoint at all. Tom Tully’s script maintains the same high bar of quality, and the art from Eric Bradbury and Mike Western radiates a real sense of time and place. Despite the fact it depicts a time period that predates my own existence, it feels familiar and authentic to the late seventies and captures the working class life from back then. I love the grittiness of the series, which doesn’t flinch from realism and depicts scenes such as Uncle Charlie smacking Billy about, or criminals aiming sawn-off shotguns at what is clearly a young boy in a Leopard costume. The series is very much of its time, and couldn’t be written today in the same style without seeming like a terrible pastiche. Despite its dated origins, the series remains just as enjoyable and thrilling as today’s children’s comics – perhaps, even more so.

As with the first volume, this second collection of stories packs plenty of adventures into its 180 pages, yet never feels rushed. Tully’s script is a master class of condensed storytelling – somehow managing to cram in character and plot development into three pages. The action moves along at a rapid pace, making the most of the serialised format to deliver a succession of cliff-hangers that practically command you to read “just one more page”. Leopardman undergoes some brilliant storylines in this volume, such as the threat of having his secret identity revealed by a nosey classmate and being captured by some crooked circus folk. I also liked how Billy became more feral and animalistic in this collection of stories, providing a sense of progression for the character as he taps into his Leopard connection.

The artwork on this series is incredible, and does a lot to convey that sense of nostalgia I mentioned earlier. The decision to reprint the series in its original black and white is a wise one, as the artwork greatly benefits from this style – the few pages from the interior cover which have been coloured lack the same impact and grittiness as the original art. Western and Bradbury manage to convey emotional reactions and a sense of dynamic movement in their panels, heightening the emotions as Billy Farmer deals with extreme situations such as a rabid leopard and a crazed hunter.

Tom Tully’s script continues to balance the superheroics with the everyday schoolboy antics in a seamless manner, earning the series its comparison to the early years of The Amazing Spider-Man. Despite the ludicrous concept of a radioactive leopard imbuing a schoolboy with super-powers, Tully plays it deadly serious (aided by the realistic artwork from Western & Bradbury) and the result is an engaging and thrilling adventure. The series could easily have been a spoof, but Tully’s decision to “play it straight” results in a far-better narrative that is arguably more relatable than Stan Lee and Steve Ditko’s work on The Amazing Spider-Man, especially to a Londoner who only dreamt of New York skyscrapers to web-crawl from as a child. It’s a shame the series has spent so much time out of print, because he deserves to be Britain’s premier superhero.

My favourite storyline in this volume is when Billy Farmer becomes embroiled in a hunt for Sheba, the leopard who granted him his powers, and her mate Raja. Not only does he have to deal with a rabid Raja, but he also has to contend with Buck Redford, a deadly hunter who has an ego as big as his rifle. Tully really raises the stakes in this story with a surprising death and some impressive action sequences as the Leopardman must fight a threat from both sides. I was also impressed at how Tully would sometimes steer a plot into surprising territory, not content to let events play out in their expected manner. There were plenty of moments where the story would go places I didn’t expect, or would explore plot holes that a lesser writer would sweep under the carpet. It is really strong storytelling that doesn’t talk down to its child audience or simplify its stories, but instead entertains and naturally follows the flow of the action wherever it might go.

This second volume of The Leopard from Lime Street is just as terrific as the first – I am awestruck at how great these comics are, and how much story is packed into the three-page installments. I am full of nostalgia for an era that I never lived in, and desperately wish I could have experienced the series first-hand in its publication run. While there are collections like The Phoenix and The Beano still out there that speak to this crucial 5-15 year-old audience, The Leopard from Lime Street is still relevant and accessible and deserves to be read. Regardless of whether you caught these stories first time around or not, these are comics that demand to be experienced again and I wholeheartedly recommend parents introduce their children to the Beast of Selbridge. That said, the series is equally as thrilling for adults as it is kids – I cannot wait for the next volume of stories to come out, as this is a wonderful treat from the past that has not gone past its best-before date.

The Leopard from Lime Street: Vol 2 is available in paperback format from Amazon and a hardback version of the book, limited to 250 copies, is also available from the 2000AD Webshop.