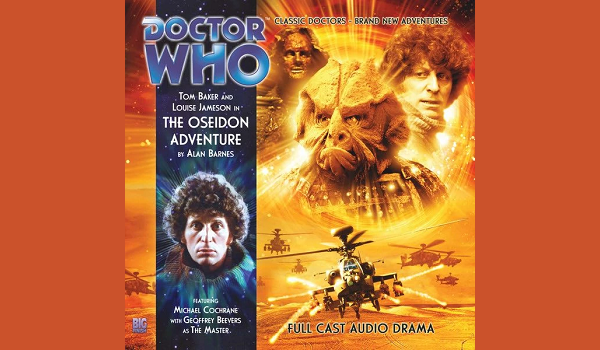 Synopsis: The first time the fearsome Kraals attempted to take over the Earth, with the help of their android agents, things didn’t go quite according to plan – thanks to the time-travelling alien Doctor and his allies at UNIT. This time, Marshal Grinmal and his belligerent cohorts are ready for them. This time, they’ll make no mistakes. This time, Chief Scientist Tyngworg has not just one plan, but a back-up plan, and a back-up back-up plan worked out. With the Doctor a prisoner on the Kraals’ radiation-blasted home planet of Oseidon, only his companion Leela can save the day – alongside a most unlikely ally.

Despite following on directly from the cliff-hanger ending of “The Trail of the White Worm”, “The Oseidon Adventure” takes the story in a completely different direction to its predecessor and ends up becoming a pseudo-sequel to the iconic Fourth Doctor adventure, “The Android Invasion”. Summoned through the wormhole in time and space by The Master, the second Kraal army reattempts its invasion of Earth with the help of its android assistants, unaware that they are just pawns in The Master’s latest scheme to rejuvenate his charred body.

This audio adventure marks the second and only appearance of the Kraals since “The Android Invasion” and it borrows some key themes from that televised adventure – namely, heavy use of misdirection and false identities to keep the listener guessing. The first half of the storyline is rife with rubber mask reveals and surprise android substitutions that evoke memories of Roger Delgado’s Master and that shocking moment in “The Android Invasion” when Sarah Jane Smith’s face fell open to reveal a circuit board underneath. Despite the lack of visuals, the constant identity reveals work perfectly, especially the distinctive sound of a rubber mask being pulled off the Master.

“The Oseidon Adventure” is extremely well-paced, and even the slower moments are given a sense of momentum due to the twists and turns in the narrative. Alan Barnes’ script is extremely enjoyable, both in the way it builds upon the previous story, yet takes the plot in an entirely different direction. One sequence I enjoyed was the unlikely partnership between Leela and The Master, and it was good fun to hear these characters interacting with each other. Leela gets the measure of The Master fairly quickly, and they make a compelling ‘odd couple’ as the scheming tactician and the uncomplicated warrior.

Geoffrey Beevers is tremendous as this incarnation of The Master with his softly spoken tones capturing the sinister machinations of the decrepit Time Lord perfectly. Tom Baker and Louise Jameson continue to sparkle with energy and drive the story forward with momentum. I also enjoyed the voices of the Kraals from John Banks and Dan Starkey, and the subtle differences between Marshal Grinmal and the scientist, Tyngworg. While the Kraals are a welcome return, they are effectively a rehash of their previous appearance and motivation – however, Barnes’ script does subvert this trope with some twists and turns. The final sequence in Oseidon is an interesting reversal of “The Android Invasion” and fans of that serial will love the parallels that Barnes slips in.

“The Oseidon Adventure” is a worthy season finale for this first series of The Fourth Doctor Adventures, remixing elements from two of the Fourth Doctor’s earliest serials, “The Android Invasion” and “The Deadly Assassin”, together to great effect. I loved listening to the Doctor and The Master verbally sparring and outsmarting each other with plans and counter-plans, whilst Leela offered a more physically threatening foil for The Master to deal with. Quick paced and with more twists and turns than a snake in a tumble-dryer, “The Oseidon Adventure” was a triumph to listen to, and another example of how Big Finish is able to create new canon adventures that instantly become essential.

Doctor Who: The Oseidon Adventure is available from Big Finish on physical CD or digital download. It can also be found on Amazon UK in the physical format.