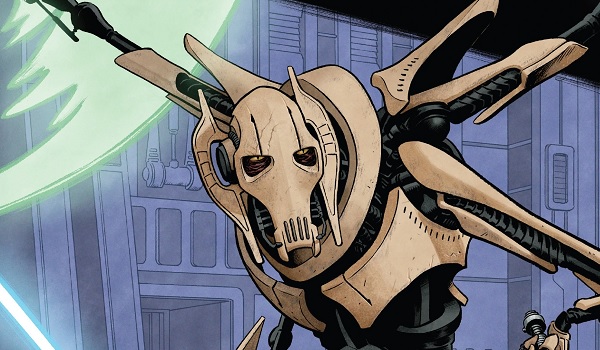 Set sometime after The Clone Wars episode “Lair of Grievous”, this single issue storyline explores General Grievous’ hatred for the Jedi and the way he has augmented his body over the years to become a mix of flesh and machine. Enraged by the Jedi’s trespass of his home, Grievous attempts to get revenge by ransacking the secrets of a Jedi Temple – only to react with extreme violence when he is outsmarted. Jody Houser relies on actions instead of words to showcase Grievous’ motivations, demonstrating his “act first, ask questions later” attitude. Grievous’ continual “upgrades” to his body represent the general’s desire for supremacy and how he considers the Jedi to be an inferior enemy. It is somewhat ironic that it is the few remnants of his Kaleesh biology that result in his downfall in “Revenge of the Sith”. 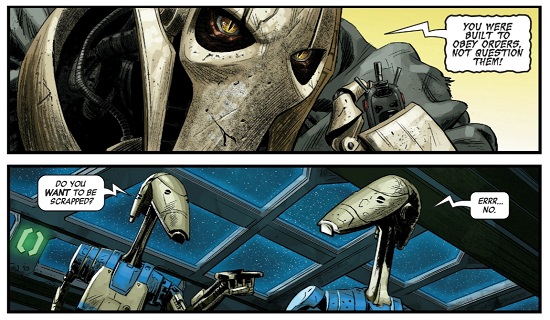 With an increased focus on visuals over dialogue, Luke Ross takes the opportunity to shine with his gorgeous panel work and storytelling. The scenes with Grievous navigating the Jedi Temple are extremely fluid and demonstrate the spider-like movements of the mechanical cyborg as he clambers across walls and ceilings. There’s a definite Raiders of the Lost Ark feel to this sequence with plenty of booby-traps populating the Jedi Temple, creating a nice bit of symmetry between the two George Lucas franchises. Ross’ art has a beautiful sense of realism about it, perfectly suited to capturing the darker side of the Star Wars galaxy and I love his take on the detailed biology of General Grievous.

A great follow-up to “Lair of Grievous”, this single issue one-shot is an excellent glimpse into the murderous rage buried within the cybernetic body of General Grievous – no matter how much he tries to cover it up.