Chronology Placement: Set after the Forces of Destiny episode “Bounty Hunted” and just before “Return of the Jedi”

Filling in the gap between The Empire Strikes Back and Return of the Jedi, this one-shot issue reveals some of the ‘behind-the-scenes’ planning that went into the attempted rescue of Han Solo – namely, how Princess Leia adopted the Boussh bounty hunter disguise. While Leia’s initial encounter with Boushh was revealed in the animated micro-series, “Forces of Destiny”, this issue details Leia’s attempts to impersonate the bounty hunter and the events that led to her taking Chewbacca to Jabba’s palace as her prisoner.

Greg Pak does a tremendous job at constructing this untold story, introducing a fresh piece of canon into the existing continuity to give better context to a scene from a 33-year old movie. Pak’s interpretation of Leia / Boussh is spot-on, showcasing her determination in rescuing Han and the way she bottles up her emotions and grief in order to get the job done. I also enjoyed the friction between Leia and Lando, demonstrating her distrust of the smuggler and her reluctance to forgive him for his role in Han’s capture. I also liked the way Chewbacca and Leia interact as they both support each other in Han’s absence, even sharing a moment of levity when Leia mistakenly gets close with Chewie’s pillow. #WookieSlobber 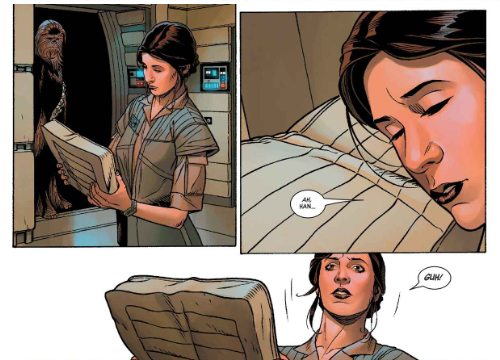 While there were multiple artists listed in the credits, I actually found it difficult to see the transitions between styles and the whole issue felt very consistent throughout. The art reminded me of Terry Dodson’s work on the Princess Leia miniseries from a few years back, and there’s even a nod to Leia’s Alderaanian companion Evaan from that series to further blend the comic and movie continuities together. Sprouse, Sliney, Deering and Story work perfectly in concert with each other to create a constant tone throughout the issue and I liked how the artists managed to capture the likeness of all the characters – whether they were human or alien.

Compelling and wonderfully illuminating, “Age of Rebellion – Princess Leia” tells a very different type of Princess Leia story, putting the character behind a mask for the majority of the adventure. As Boussh, Leia must rely on her instincts and quick-fire decisions as she rubs shoulders with the scum of the Outer Rim. Overall, this is a really strong issue that explores Leia from a different perspective than we’re used to and is so authentic in tone that it feels like a ‘deleted scene’ from the Lucasfilm cutting room floor.