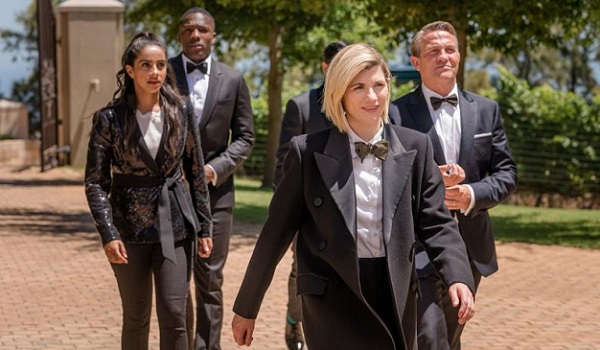 Synopsis: Intelligence agents around the world are under attack from alien forces, so MI6 turn to the only people who can help: the Doctor and friends. As they travel the globe looking for answers, attacks come from all sides. Earth’s security rests on the team’s shoulders, but where will this planet-threatening conspiracy lead them?

Kicking off a new series and a new year with a two-part episode, Doctor Who embarked on one of its most ambitious globetrotting episodes yet as the Doctor and her companions became embroiled in espionage, infiltration and other spy tactics. After a crash-course in spy school for Yaz and Ryan, it turned out the biggest deception had been played on the Doctor and the audience, as the final moments of the episode saw newcomer O revealed to be one of the Doctor’s oldest enemies instead. It was truly a great surprise, and writer Chris Chibnall pitched it perfectly with the hint of a romance between Yaz and this new character to make us accept him even more quickly than usual. Not to mention the fact that I was fairly sure this particular villain would be retired for a bit after their last appearance.

Initially, I felt the episode was a bit too derivative of past seasons, with elements such as the killer Sat-Nav, which felt similar to the ATMOS system from “The Sontaran Strategem” and “The Poison Sky”, whilst the ghostly apparitions looked and felt like the Cybermen in their ghost phase during “Army of Ghosts” – in fact, I almost expected them to be revealed to be Cybermen in the climactic scenes. However, the episode moved at such a fast pace that it didn’t linger on any of these ideas for too long, and was able to carve out its own identity. I particularly liked the increased focus on horror with the shimmering monsters unrelentingly coming after their foes and seemingly banishing them to an “upside-down” universe – I half-expected to see a Demogorgon running past!

This episode felt ambitious from the outset, and not just because of its varied choice of locations across the globe – the inclusion of guest stars such as Stephen Fry and Lenny Henry gave the episode some star power and made me think “how on earth have those two never been on Doctor Who before?”. While Stephen Fry’s appearance was short-lived (assuming he doesn’t reappear in the second part), Lenny Henry was surprisingly effective in a more dramatic role. Known more for his comedy than his serious acting, it was great to see Henry in a villainous role and his confrontation with the Doctor was gripping. Hopefully he remains a notable presence in the second half of the story now that the true spymaster has been revealed.

If you’ve read this far, I assume that it is safe to spoil the true identity of Sacha Dhawan’s character. I had him pegged as a villain early on, although the subtle flirtation between him and Yaz had me expecting his reveal to be later on. Even then, I suspected that he would be a human threat so to see his shack flying alongside the plane and the confirmation that he was The Master in his latest regeneration was a complete shock. Dhawan’s shift from O to The Master was brilliant and reminded me of Andrew Scott’s transformation to Moriarty at the end of the first series of Sherlock. Dhawan captured the maniac energy of The Master perfectly, echoing the work that both John Simm and Michelle Gomez put into the character whilst bringing his own voice to the role. This new incarnation of The Master also reminded me somewhat of Heath Ledger’s Joker, straddling that line of genius and insanity – and while it remains to be seen whether this is truly the Master or not, I sincerely hope that Dhawan becomes a recurring enemy for the Doctor.

With so much action and plot to cram into an hour episode, it felt like there wasn’t much focus on the Doctor and her core companions – even when they were split into two teams, but there were some subtle hints of potential developments especially when Graham showed an interest in the Doctor’s past. I wonder if this season will have them question just how much they know about this mysterious woman who takes them travelling around the galaxy – and it also seemed like the constant “pausing” of their home lives has become to take its toll with friends, family and co-workers commenting upon the frequent disappearances. It was nice seeing Yaz getting a bit more of a spotlight considering her lack of development over the past series, and her disappearance into the “upside-down” world seemed to indicate that she is somewhat changed. Perhaps she is now 7% non-human, as well? Hopefully we will see more ramifications of that event, otherwise it felt somewhat unresolved and out of place.

The cliff-hanger ending and titular “Spyfall” was strong enough, but the WTF moment of a new Master introduced into the continuity made it even more amazing. Without those final few moments, this would have just been a cute spy pastiche with some intriguing villains, but now I am eager in anticipation to see the second half of this story. Taking on-board some of the criticisms of the previous series, it seems like Season 12 will touch more upon the Doctor’s past, but in a way that remains accessible to new fans. There are plenty of questions left unanswered after this strong season-opener, and that cliff-hanger ending might be the best one since the Tenth Doctor got blasted by a Dalek in “The Stolen Earth” and begun to regenerate. Thank goodness we don’t have to wait a full week for the next installment!

Next Episode – “Spyfall – Part Two”
In part two of this epic spy thriller, a terrifying plan to destroy humanity is about to reach fruition. Can the Doctor and her friends escape multiple traps and defeat a deadly alliance?