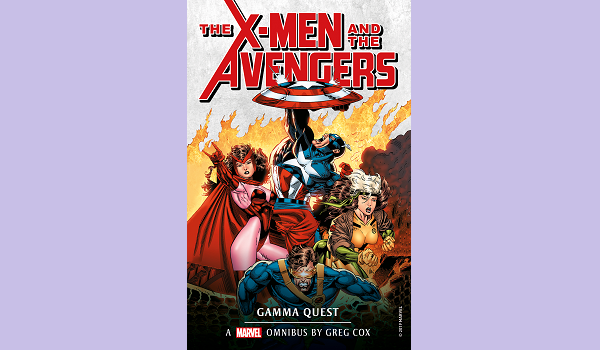 Synopsis: The X-Men: mutant protectors of a world that fears and hates them. The Avengers: Earth’s Mightiest Heroes, the greatest super-team ever assembled. When the Scarlet Witch of the Avengers and Rogue of the X-Men both disappear under mysterious circumstances, each team’s search leads them to more questions than answers. Desperate to recover their missing teammates, they must join forces to uncover the truth. But their efforts will bring them up against a foe with the deadliest power of all: to make them turn on each other!

Originally published in the late-nineties, Greg Cox’s trilogy of Gamma Quest novels focuses on the unlikely partnership between the Avengers and the X-Men; two super-teams with very different public images. While both teams fight for the greater good, the Avengers are sanctioned and approved by the US government, whilst the X-Men are a group of mutant outlaws – either barely tolerated or actively hated, depending on how mutant-phobic the current President might be. The two teams rarely work together, often keeping to their own corners of the Marvel Universe, and so there is always a degree of tension when the two teams are united. Later stories seen in the comics such as Avengers vs X-Men or Uncanny Avengers explore this in greater detail, working to overcome the inherent divide between superheroes and mutants.

The sudden abduction of the Scarlet Witch, Rogue and Wolverine is the impetus that spurs our heroes into action, and Greg Cox teases both the reader and the rescuers by maintaining a sense of mystery over those responsible for the kidnaps and their motives. This secret, which I won’t spoil here, is extremely effective and offers a “whodunnit” to the reader that stretches across multiple books. The eventual reveal is brilliantly done, and I love how the plot is rooted to the continuity of the comics at the time the books were written. It truly feels like a missing adventure and slots nicely into the existing Marvel Comics canon – although alternatively, it remains accessible for readers who have a passing knowledge of the characters. I’m not overly familiar with the late-nineties era of the X-Men and Avengers, yet I was able to follow the plot of this trilogy with ease.

The one rule of a super-hero team-up is that you must have the heroes fight each other first (often due to a misunderstanding) before they unite to take out the main threat, and Greg Cox does this with a cataclysmic three-way battle between the X-Men, the Avengers and the Incredible Hulk at Niagara Falls. This epic fight sequence takes up the majority of the first book, and Cox delves into extreme detail over the course of the fight – switching perspectives and giving us a blow-by-blow account of the skirmish. This slower approach to chronicling the action heightens the cinematic nature of the clash, allowing us to see the battle from multiple POVs. Cox is highly skilled in choreographing each member of the fracas, making the lengthy prose feel so extremely visual that it feels like you are reading panels from a comic book. There are multiple big-battle moments like this peppered throughout the book and Cox is tremendous at directing the action in each one, although it is that initial clash with the Hulk that stood out for me.

Another area where Cox excels is his characterisation of the X-Men and the Avengers, with each character feeling real and distinct from each other. Each character has authentic motivations and a unique narrative voice that prevents them from blurring into each other. I was particularly impressed with the subtle humanity of the Vision, his programming glitching due to his complex emotions towards his ex-wife. Cox also seems to greatly enjoy writing for the Beast, with his intellectual witticisms in the face of danger, or the Hulk, with his blunt disregard for social convention. I personally enjoyed how he delved into the mindsets of the three captives, highlighting the similarities between Rogue and the Scarlet Witch, as well as tapping into Wolverine’s attempts to resist his infamous berserker rage. It feels like there is actual development for each of the characters in the book, and no character feels superfluous to the action.

This reissue from Titan Books combines all three Gamma Quest novels into one giant omnibus collection that reads brilliantly. While the fight sequences might be somewhat verbose at times, there is no sense of plot-padding to stretch the novel out across three books. Each chapter builds upon the last to a fantastic battle royale that will have you gripped up until the final few pages. Appealing to fans of both super-teams, X-Men and the Avengers: Gamma Quest offers readers a blockbuster experience that often exceeds the comics that inspired it. This omnibus collection is an essential addition to any Marvel fan’s bookshelf and absolutely fantastic value for money – especially compared to the price of individual comics these days. Cheaper than a movie ticket or a graphic novel, it will keep you entertained for far longer!

X-Men and the Avengers: Gamma Quest is currently available in paperback on Amazon, or as an eBook from Amazon Kindle.