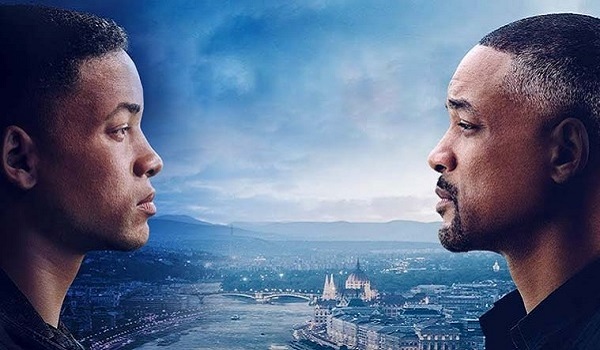 Synopsis: A retiring assassin, Henry Brogan, finds himself pursued by a mysterious killer that can predict his every move. Discovering that he’s being hunted by a younger clone of himself, Henry needs to find out why he’s being targeted and who the creator is.

It is a truth universally acknowledged that any action hero worth his salt must at some point appear in a movie against himself; either through time travel, cloning or as twins separated at birth. Action movie aficionados will remember classics like Jean Claude Van Damme’s Double Impact and Replicant; Arnold Schwarzenegger in Last Action Hero and Terminator Genisys or Jet Li’s The One as examples of films where the lead actor plays multiple versions of himself. With Gemini Man, Will Smith joins this elite club as he plays an aging hitman whose plans for retirement are cut short when a younger version of himself is sent to eliminate him. After seeing the trailer online, I expected the film to be like Looper but utilising CGI to make the younger version of Will Smith instead of another actor. Unfortunately the film doesn’t use time travel as a plot device, which feels like a wasted opportunity.

Will Smith’s character Henry Brogan is an aging hitman who can perform impossible hits, such as taking out a target on a moving train, but is quickly losing his edge and wants to retire. Predictably, his employers decide to eliminate him once he stops working for them and they send a younger clone of himself (Junior) to take him out. The premise being that Brogan is such a bad-ass assassin that only a version of himself in his heyday can possibly kill him. While the plot is largely academic and just there to put Will Smith in a situation where he is up against himself, there are some nice moments of drama – particularly between Junior and his adoptive father, Clay Varris – played by Clive Owen. The two have a dysfunctional father-son relationship that reminds me, bizarrely, of Rapunzel and Mother Gothel from Tangled. There are some nice dramatic moments as Junior comes to terms with the fact that his “father” has been manipulating him from the start.

In the midst of escaping elimination Brogan unintentionally drags a fellow DIA agent into the chaos, which allows Mary Elizabeth Winstead to join the cast as a pseudo love interest for both the older and younger Brogan. Rounding out the elder Brogan’s gang is his old friend and ex-marine, Baron (played by Benedict Wong) who gives the two fugitives asylum when they are on the run from the DIA and Junior. The three of them work nicely together, although Baron’s role is to deliver one-liners and supply the pair with weapons. Wong plays the role nicely, but the writers clearly didn’t know what to do with him in the action-packed climax, resulting in a rather unceremonious ending for the character that didn’t have any emotional resonance. The chemistry between Winstead and Smith is awkward, mainly due to the age difference of the actors, and while they try to hint at a potential relationship with the younger Smith – it comes across just as awkward, especially when older Smith outs him as a virgin in front of her.

Ang Lee directs some exhilarating action set-pieces throughout the movie, although the standout moment is when Brogan first meets Junior and the pair embark on a high-octane motorcycle chase through the streets of Colombia. There is a moment where Junior uses a motorbike as a weapon to swat Brogan over the bonnet of a car, and it is as awesome as it sounds – the fight sequence is extremely well-choreographed and a highlight of the movie. Subsequent fights rely heavily on the CGI work of Junior and there are some brief moments of uncanny valley with the youthful Will Smith. Some scenes, mostly those set at night, look fantastic and capture Smith in his Fresh Prince of Bel Air days and rival the excellent de-aging work done in the Marvel Cinematic Universe, but the moments set in broad daylight, such as the final scene, look awful and plastic-like. The CGI isn’t terrible, but you never quite believe that Junior is a real person – still it could be worse, they could have gotten Jaden Smith to play the role.

Will Smith is as charming as always in the role of Henry Brogan, demonstrating how he managed to transition from a sitcom actor to a movie star. Smith brings a real maturity and gravitas to the role, which feels removed from his other action roles in Independence Day, Men in Black and Bad Boys, and more akin to his role in I am Legend. Smith seems to be undergoing something of a renaissance in recent years with his role as the Genie in Aladdin, Deadshot in Suicide Squad and the final installment of the Bad Boys trilogy, Bad Boys for Life. The actor remains popular, despite the odd box-office bomb, and he is still a bankable action movie star. While Gemini Man won’t go down in history as one of the actor’s most memorable films, it is an enjoyable popcorn flick that ticks all the boxes and lives up to his elevator pitch premise.

Plot-wise, Gemini Man shares plenty of similarities to Looper, but lacks the same impact as its time-travel themed cousin. The reliance on the CGI gimmick of a de-aged Will Smith means that the film will judged more on its technical achievements than its plot and action, and will no doubt be referred to as “that one where Will Smith fights himself” in decades to come. Despite the innovative special effects, the story itself rarely steps outside its comfort zone and follows a familiar narrative structure throughout. Definitely worth checking out for Smith’s laid-back and charismatic performance and some dynamic action sequences, but don’t expect to remember too much about the film in a year’s time.

Gemini Man is out now and available on DVD, Blu-Ray and 4K Ultra HD formats, as well as Amazon Prime Video.