Synopsis: As the last remaining humans are ruthlessly hunted down, Graham, Ryan and Yaz face a terrifying fight to survive. Civilisations fall. Others rise anew. Lies are exposed, truths are revealed, battles are fought, and for the Doctor — trapped and alone — nothing will ever be the same again.

From the first ever episode of Doctor Who, the origins of the Doctor have been shrouded in secrecy and over countless decades writers have chipped away at the mystery to give us a clearer understanding of where the Doctor came from, such as the introduction of regeneration in “The Tenth Planet” or the revelation of the Time Lords in “The War Games” and even taking us to Gallifrey itself in “The Deadly Assassin”. Aside from his real name, viewers have a fairly clear idea of who the Doctor is and where they came from and the mystery of the character has largely been dispelled. With this episode Chris Chibnall simultaneously reveals more of the Doctor’s past history, yet makes the character into an enigma once again, prompting viewers to ask the oldest question in the universe again: “Doctor Who?”

This isn’t the first time that Doctor Who has retconned his own established history, or revealed hidden incarnations of the Doctor, but unlike the War Doctor, this revelation completely undoes everything we know about the Doctor. For instance, our naming convention for the Doctor is completely false now – it was on shaky ground when we found out that the Ninth Doctor was technically the Tenth regeneration (thanks to the War Doctor) but now that we have a Doctor who has had an unspecified number of regenerations before ‘The First Doctor’, the numbers are truly out of order. The actual reveal that the Doctor is the Timeless Child and is responsible for inspiring the Time Lords and their regeneration cycles doesn’t destroy canon as much I expected, and it plays into other fan-theories that the Doctor is some messiah figure for the Time Lords.

Personally, I don’t mind the change too much, even if it means that the Doctor technically isn’t a Time Lord anymore. Going into the episode, I thought I would reject any major shake-ups to the continuity of the series but Chibnall’s new addition doesn’t directly contradict too much of my head-canon. We always assumed that the Eleventh Doctor needed a new regeneration cycle in “The Time of the Doctor”, but it seems like he was going to regenerate regardless of whether it was granted or not. The idea that the Doctor was mind-wiped and reset to the First Doctor helps preserve the continuity of everything we’ve seen since “An Unearthly Child”, whilst adding a whole degree of mystery surrounding the Time Lord’s secret organisation, The Division. Presumably, these were the same people that we saw chasing the Fugitive Doctor in “Fugitive of the Judoon” and at some point the Doctor is caught and mind-wiped. Given how this episode ends, I wonder if we will see more exploration into this as the 13th Doctor is arrested for the crimes of the Fugitive Doctor.

Unsurprisingly, the ‘Timeless Child’ reveal takes up most of the focus of this episode – although the tension surrounding the Cybermen and the last humans remains strong. The scene where the Lone Cyberman is inspecting the dormant Cybermen as he looks for the humans is legitimately terrifying and one of the most tense moments in Doctor Who history. I was convinced that we were going to lose one of the companions in this episode, but the focus was firmly on the Doctor and the Master. This was easily one of Jodie Whittaker’s strongest performances, although I would love to have seen how Peter Capaldi’s Doctor would have reacted to the revelation. This series has definitely tested the Thirteenth Doctor and allowed Whittaker to show a more nuanced take on her Doctor, aside from the quirkiness and one-liners. Her chemistry with Sacha Dhawan’s Master was incredible, and I hope he makes a return appearance in the remainder of her time as the Doctor. 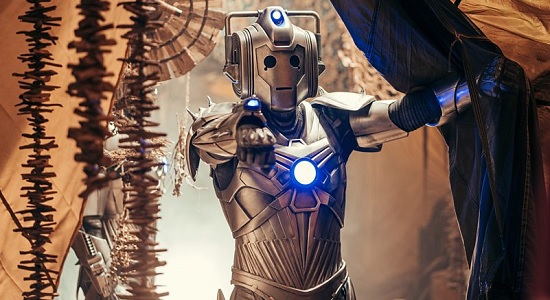 The Master’s reappearance immediately neutered the Cybermen, and I found the more overpowered the Cybermen became, the less dangerous they seemed. I loved the design of the CyberMasters, but ultimately they were nothing more that background aesthetic that seemed less effective than the flying Cybermen heads in the previous episode – at least they managed to claim two human lives! Dhawan’s Master was chaotic and engaging throughout the episode, thanks to his unpredictable energy and his death wish. His manic performance really heightened the tension of the episode and gave Whittaker something to play off in those big moments. The climactic scene was fabulous, mirroring plenty of other moments where the Doctor has had to choose between mass-extinction or cowardice, and much like the Master, I thought she was going to do it.

“The Timeless Children” certainly succeeded in changing the Doctor Who mythos forever, although it doesn’t need to affect the character’s future going forward. The Doctor is still the same person we’ve been following for the past fifty-plus years, although this time we have regained a sense of mystery about her past. As much as I enjoyed Season Eleven, none of the episodes felt important or developing the narrative of the series forward, but the same cannot be said for Season Twelve, which has completely rewritten the rule book on the character’s past. For me, I will remember the effectiveness of those massive twists, particularly the Master unveiling himself in “Spyfall – Part One” and the moment the Doctor discovered that Ruth was a past incarnation of herself in “Fugitive of the Judoon” – both strong WTF moments that rival anything in the series to date. While some part of me is resistant to such as swooping change to continuity, I cannot deny how exciting and unpredictable this current era of Doctor Who is. Every episode feels important again, and it feels like anything can happen – I cannot wait to see where we go next!