Despite the technological advances of the era, Mega-City One has had a troubled history with introducing robot law-enforcers into the Justice Department. Codenamed ‘Mechanismo’, the initial project was plagued with glitches that resulted in a deadly robot (Number 5) running riot and secondary efforts created a robot saboteur that sent McGruder and Dredd crashing down into the Hestian Wilderlands. The program was eventually scrapped and the Justice Department continued to rely on human Judges to enforce the law in Mega-City One. However, the dramatic loss of life seen on Chaos Day has resulted on a strain to the Justice Department and improvements to the machine’s programming has led to Chief Judge Hershey reopening the project with a new set of Mark 8 Mechanismo units. However, can you ever really trust a machine to make life-and-death decisions about humans?

The first story in this collection, “Harvey”, deals with the return of the Mechanismo project and Dredd’s expected resistance to the idea. The majority of the story revolves around Dredd taking Judge Harvey, the poster-droid for the program, on a field exam and determining whether the robot makes the grade. John Wagner plays against expectations with Judge Harvey, making him a more empathetic judge than the human Dredd and actually making him appear to the reader as a worthy alternative to the existing system. It’s a stroke of genius to have the emotionless, programmed robots actually care more for the rehabilitation of criminals and the social constructs that lead to crime than the actual humans themselves. Part lawman and part community support, Harvey and his Mechanismo ilk quickly win over the citizens of Mega-City One and the readers alike. The decision to give the robots neutral “cuddly” names is effective, and a direct contrast to the likes of Dredd. 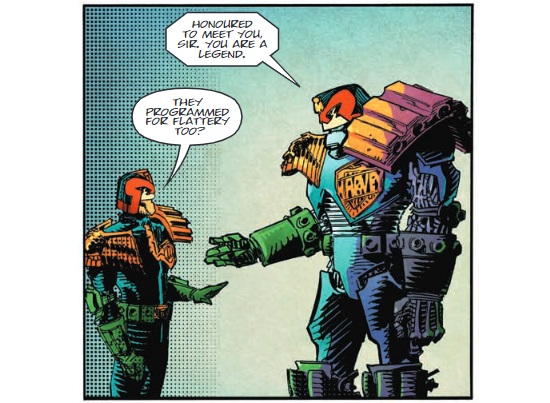 While Wagner does revisit issues with the Mechanismo units unreliability, it is interesting to note that the conflict arises from a Mechanismo Mark 8 unit (Judge Jerry) breaking the rules because he has become too empathetic to the plight of a family about to be evicted. It’s a complete reversal from the original Mechanismo rogue units and serves to position Dredd in an antagonistic position, even though he is technically in the right. John McCrea’s artwork underscores the action brilliantly, and I love the way he presents Harvey as a gentle giant against Dredd, even when they are breaking bones and spilling blood. There is an ape-like quality to Judge Harvey’s design that further humanises the robot as McCrea gives him a sense of movement and fluidity that contrasts against the rigid movements of his robotic predecessors. McCrea captures the grittiness of Mega-City One perfectly, and the colours from Mike Spicer emphasise the neon-nightmare of the future city. It’s a strong debut for Judge Harvey and Wagner continues to sow the seeds for the rift between Dredd and Chief Judge Hershey as the pair clash over this program – mirroring the same split between him and McGruder years ago.

This rift is directly explored within the second story “Machine Law”, which sees Hershey step down from the office of Chief Judge and a successor chosen in her place. As with McGruder before her, it seems that the Mechanismo project is one of the final nails in her coffin and rather surprisingly, it ends up immediately affecting her replacement too. After personally endorsing Chief Judge Logan for the position, Dredd is as shocked as everyone when he places Judge Harvey onto the Council of Five to provide a different perspective. What follows is a tense political game as Logan attempts to stick to his decision whilst citizens and Judges alike rebel against his choice. Wagner explores the difficulty of the situation on Dredd, who is naturally against the idea but is also torn by his loyalty to his friend. The tension builds throughout the story, and whilst there are some action set pieces, most of the drama stems from the political machinations. As Logan continues to stick his heels in and public disquiet over Harvey’s appointment increases, it feels like something has to give. Wagner’s script is razor-sharp, creating fresh and exciting dilemmas for Dredd that a jackboot to the throat won’t fix.

Colin MacNeil handles the art duties for “Machine Law” and he produces a sombre, brooding view of Mega-City One compared to McCrea. This art style fits nicely against the slow burn of this second tale, and MacNeil’s artwork has traditionally been used for these defining moments of the series, having drawn the America trilogy and the original Mechanismo storyline, and providing a sense of gravitas to those storylines. The sequences where Hershey retires from her Chief Judge position resonates on the page, and subsequent moments between her and Dredd demonstrates the fractured friendship between the pair and there is a real sense of sadness in MacNeil’s panels. I won’t spoil too much here, but it is a momentous change to the status quo of the series and a painful reminder that Dredd’s world moves ever forward unlike the stasis seen in American comics.

Compared to the other mega-epics of the series’ past, “Machine Law” is extremely low-key and understated but no less destructive in its results. The world of Judge Dredd changes dramatically here as Wagner sows some seeds for his next big subplot. Long-term fans of the series will recognise the importance of this storyline as the series continues to evolve and pushes Dredd on the back foot. Wagner subverts expectations multiple times throughout the story, moving away from the anticipated “robots go amok” narrative and instead presenting the Mechanismo units as efficient replacements to flesh-and-blood Judges. As readers we share Dredd’s misgivings, but as the plot continues, it appears that the Mark 8Vs are capable of taking on the task, forcing us to re-evaluate our prejudices. While Wagner leaves Dredd’s world stable at the end of this adventure, it feels like a powder keg just waiting for a stray spark to ignite it. Just seeing John Wagner’s name in the writing credit has connotations of quality associated with it, and “Machine Law” is no exception to the rule! Definitely worth picking up to see where the world of Judge Dredd is heading next…