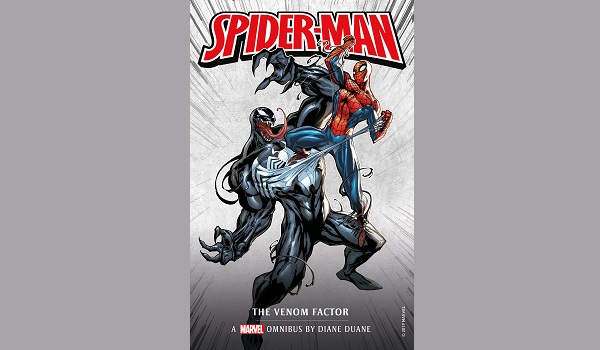 Synopsis: Venom is out of control, seemingly murdering one of the innocents he swore to protect. Has Venom lost his mind, or is there another suspect?

The Lizard is rampaging through the Everglades in search of a cure. While Spider-Man tries to stop him causing any more destruction, Venom appears hell-bent on killing the Lizard. What do these two have in common, and does it have something to do with the mysterious group of mercenaries in the area?

Doctor Octopus is stockpiling nuclear bombs and has masterminded a plan to rain havoc down across the globe. Spider-Man and Venom must put aside their differences and team up to defeat Doc Ock before he devastates the planet.

Originally published between 1994 and 1996, Diane Duane’s trilogy of Spider-Man novels have been collected together in an omnibus edition by Titan Books. Across all three books, Spider-Man finds himself at odds with the morally questionable “lethal protector” known as Venom, as well as the shadowy organisation known as CCRC. While this plot thread spans the entire trilogy, each individual book focuses on a standalone adventure against one of Spider-Man’s infamous villains, such as Hobgoblin, The Lizard and Doctor Octopus.

Set after Venom’s relocation to San Francisco in the Venom: Lethal Protector miniseries, Duane’s novels continue to showcase the symbiote’s shift from villain to anti-hero, even if his hatred for Spider-Man occasionally bubbles over. While there are plenty of references to the early-nineties Spider-Man stories, Duane doesn’t address any of the long-running subplots of the era such as the return of Peter Parker’s parents, “The Clone Saga” and “Maximum Carnage”. This allows the trilogy to be relatively separate from the comics, but clearly influenced by the same continuity.

One element of the books which is refreshing, particularly reading it twenty years after its original publication, is how Duane depicts the marriage between Peter and Mary Jane. Infamously undone by a deal with Mephisto in the “One More Day” storyline because the editors felt it made Spider-Man older and unrelatable, Duane makes the marriage seem organic and realistic. Mary Jane is portrayed as her own character, not defined by her husband and his alter-ego but instead a driven actress who has to work hard to keep her household afloat.

With the additional page count afforded to her by the novel format, Duane is able to explore the human side of the Parkers alongside the super-heroics to maintain that central Spider-Man ethos that he is the ordinary, every-day superhero any one of us could be. At times this focus on the mundane slowed down the pace of the adventure, and often the Mary Jane subplots felt superfluous to the main plot. Duane’s prose is extremely detailed and well-researched, particularly in relation to a broad range of topics such as; photography, radiation, corporate fraud, space shuttles and voice-over acting. While I appreciated the level of research applied to these topics, there were times where it became tough to read and quite dense.

Of the three novels, the second book “The Lizard Sanction” is the strongest read and Duane clearly has fun dealing with the emotional consequences of Curt Connors’ transformations into The Lizard. The change in setting from New York to Florida results in a fun culture-shock for Spider-Man as he trades the concrete jungle for swamplands and crocodiles. I also enjoyed the appearance of Hobgoblin, the Jason Macendale version, as one of the antagonists in “The Venom Factor” as he offers a decidedly more mercenary take on the traditional Green Goblin character. While Doctor Octopus lends his name to the final book “The Octopus Agenda”, I was surprised at how little he actually appeared in the novel – instead looming over proceedings in his “Master Planner” guise.

Duane’s strength is in her characters, and I really enjoyed her take on Venom. She captured the juxtaposition of his refined speech and his brute strength, and I couldn’t help but hear Tom Hardy’s “Venom voice” in my head when reading his dialogue. Tonally, the trilogy reminded me a lot of the classic Nicholas Hammond Spider-Man movies from the seventies, albeit with a modern twist. The focus on investigative journalism and shadowy organisations alongside the healthy dose of Peter Parker moments evoked memories of those classic films. On the other hand, the choice of villains and the focus on the Venom/Spider-Man feud evoked memories of the classic 1990s Spider-Man: The Animated Series. As a result, the trilogy feels like a 90’s mixtape homage to the best bits of Spider-Man lore.

Re-released over twenty years after its original publication, Spider-Man: The Venom Factor is a curious throwback to mid-nineties Spider-Man that transports readers back to those simpler times; something that is made even more jarring in the last few chapters where a bomb threat on the World Trade Center reminds readers of a pre-9/11 world. As a long-time and current reader of The Amazing Spider-Man, it is extremely odd to step back in time and see a happily married Peter Parker, and even more disorientating to see how well the set-up worked before it was eventually retconned out of existence. Peter still has to juggle his personal problems up against his superheroics, but his problems are just a bit more complicated than skipping school.

Collected in one book, Spider-Man: The Venom Factor omnibus offers extremely great value for money, and is definitely worth reading if you missed it the first time around. Diane Duane deftly juggles both halves of Spider-Man’s identity and explores the strength that comes from his marriage to Mary Jane. While the pacing can be hit-and-miss at times, this is a fantastic relic from Spider-Man’s past that evokes memories of a specific period in the character’s history, and one that is still enjoyable all these years later.

Spider-Man: The Venom Factor is currently available in paperback on Amazon, or as an eBook from Amazon Kindle.