Out of the three new heroic leads introduced in the Age of Resistance trilogy, Poe Dameron is the only one whose history doesn’t get explored much in the films, aside from a brief reference to being a Spice Runner in The Rise of Skywalker. The biggest glimpse into his pre-Resistance life came from the YA novel “Before the Awakening”, which revealed Poe’s role as a pilot in the New Republic as the commander of Rapier Squadron before eventually enlisting in Leia’s Resistance against the First Order. This single issue storyline takes place during that period, and explores Poe’s love for the freedom of space and his skill as a pilot. Writer Tom Taylor conveys Poe’s recklessness and competitive streak as he chases after a ship that has stolen confidential information from the New Republic, and while I won’t reveal who is ultimately responsible for the theft, it’s a nice foreshadowing for one key relationship in The Last Jedi. 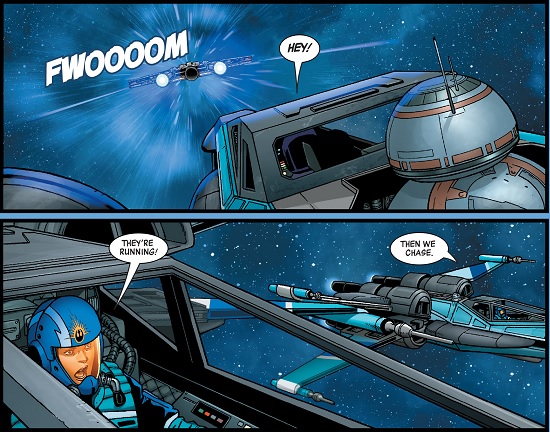 Taylor’s script is witty and playful, particularly during an exchange between Poe and the mysterious thief, which feels reminiscent of Poe’s own brand of humour when facing down Kylo Ren and General Hux. His interpretation of Poe follows the same rash, cocky and confident flyboy that we see in the The Force Awakens and The Last Jedi, but he also learns from his mysterious target as he navigates the asteroid field in chase of them. This issue features crisp and clear artwork from Ramon Rosanas, which looks absolutely amazing when coloured by Guru-eFX. I absolutely love the detail in the colouring, down to the light shading on Poe’s face where his five-o-clock shadow is. Rosanas effortlessly channels Oscar Issac’s likeness into his artwork without needing to rely on photo-realistic visuals, and the whole issue feels light-hearted and energetic – particularly the aerial action sequences.

This issue works as a strong prelude to the “Before the Awakening” novel, setting out Poe’s motivations and frustrations with the New Republic before his eventual defection to the Resistance. The punchline reveal at the end offers some interesting context behind Poe’s actions in The Last Jedi, making the issue a nice companion piece to that movie also. With gorgeous art and a script that both delights and amuses, this is another hit from the team of Taylor and Rosanas.