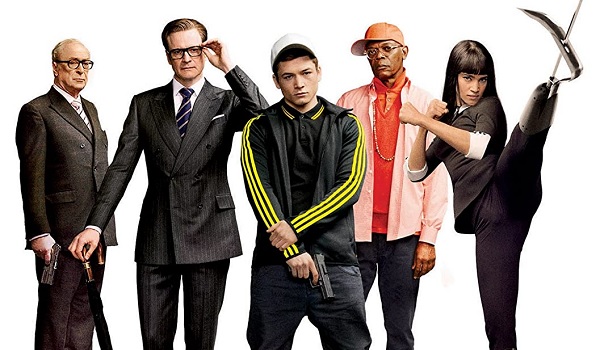 Synopsis: Gary “Eggsy” Unwin lives in a South London housing estate and seems headed for a life behind bars. However, dapper agent Harry Hart recognizes potential in the troubled youth and recruits him to be a trainee in the secret service. Meanwhile, villainous tech genius Richmond Valentine launches a diabolical plan to solve the problem of climate change via a worldwide killing spree.

Based on the Mark Millar comic series of the same name, Kingsman: The Secret Service is a gloriously violent homage to vintage spy movies, both celebrating and reinvigorating the concept of the stylish, well-manicured gentleman spy. While the James Bond franchise has moved on from that vision of the character ever since Daniel Craig took over the role, Kingsman: The Secret Service takes the concept of the refined British secret agent and applies Millar’s trademark hyper-violence, made infamous in Kick-Ass. In fact, director Matthew Vaughn and his screenwriter Jane Goldman were the ones responsible for adapting the initial volume of Kick-Ass to the big screen, translating Millar’s nihilistic comic-book violence to a wider audience.

Colin Firth embodies the very concept of the film – known for his roles as the quintessential English gentlemen, he plays a distorted version of his typical role and swaps his good manners for bare-knuckle brawls. One early iconic scene shows the well-spoken, umbrella-clad Harry instigate a bar fight against some local hooligans to demonstrate the importance of good manners. The action is lightning-fast, lingering on close ups of extreme injuries and the kinetic camerawork dynamically from moment to moment. A similar set-piece later in the film depicts a seemingly uninterrupted bloodbath within a church as if it is a single take, keeping the camera focused on Firth as he performs a ballet of bloodletting, effortlessly executing those who attempt to harm him. Firth’s role as Harry Hart is integral to the film, not only as a mentor to his protege, Eggsy, but also as the “old guard” that the streetwise chav seeks to replace.

Despite its spy trappings, Kingsman: The Secret Service feels like a superhero origin story in structure as we watch Eggsy train to become a member of the agency, standing out from the other applicants due to his working-class background. The selection process forms a great deal of the film’s running time and unlike most origin stories, it is actually really gripping. It feels like a Hogwarts for spies, and the ongoing tasks set by the organisation get increasingly more brutal. In fact, the main plot involving Samuel L. Jackson’s tech guru’s attempts to cull human civilisation as a hardline approach to global warming struggles to maintain the same level of engagement as the scenes in the training camp. Part of this is down to Taron Egerton’s natural charm as Eggsy and how he gradually becomes comfortable immersing himself into the life of being a spy, trading in baseball caps and trackie bottoms for cuff-links and oxfords (not brogues!).

Samuel L. Jackson plays against type as a lisping tech genius with a fear of blood, coming across more like Chris Eubank than Mark Zuckerberg. I found myself taken out of the moment whenever he was on-screen, mainly because he has become so synonymous with the likes of Nick Fury or Jules Winnfield that I found it odd to see him acting effete. That said, it did allow for his assistant Gazelle (Sofia Boutella) to take a more physical role, and her unusual method of killing people with her sharpened leg prosthetics was certainly very different. As she sliced and diced her way through anyone who stood in her way, she reminded me of those iconic James Bond villains Jaws and Oddjob. I also enjoyed Mark Strong’s role as Merlin, the Q of the Kingsman world, adopting a support role and showcasing the various gadgets and gizmos to assist Eggsy on his mission.

I really enjoyed the scenes of Eggsy’s home life on the streets of South East London and how the film acknowledged his rough upbringing, but didn’t focus too heavily on the cultural divide between Eggsy and Harry. Taron Egerton hits the right balance, demonstrating Eggsy’s roots but without making him into an easy carciature. Even when his transition into gentleman spy is complete (with a brilliant callback to that iconic bar fight), Eggsy doesn’t feel like a chav in a smart suit, but rather a fully-rounded character. Ironically throughout the film I found myself hoping that his mother’s boyfriend would get his comeuppance moreso than Samuel L. Jackson’s scheming billionaire, and he was planning near-global extinction.

While films like Austin Powers mocked some of the idiosyncrasies of classic spy movies, particularly the flamboyance of the 1970s, Kingsman: The Secret Service extracts the elements that made those films cool and infuses it with modern influences. The film itself is a juxtaposition of styles – modern vs. traditional, posh vs. chav, espionage vs. action, and it is this curious blend that results in a truly fresh interpretation of the genre that feels distinct from the James Bond and Jason Bourne franchises, whilst sharing the same DNA. While Kick-Ass sometimes felt juvenile in its sarcastic reinvention of superheroics, there is a maturity and reverence at the heart of Kingsman: The Secret Service that serves the film well. A stable foundation for the franchise that it has since spawned, Kingsman: The Secret Service is an immaculately styled movie that is every bit as fashionable as the well-dressed spies that inhabit its world.

Kingsman: The Secret Service is available on DVD and Blu-Ray from Amazon UK