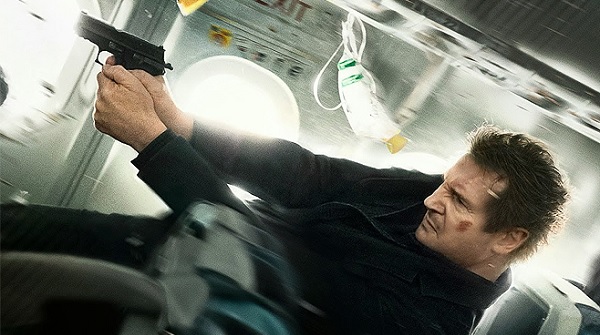 Synopsis: While flying from New York to London, US Federal Air Marshal Bill Marks receives text messages from an anonymous sender who is threatening to murder a passenger every 20 minutes until millions of dollars are deposited into an unnamed bank account. Marks faces a race against time to find and restrain the person responsible but when the bank account is found out to be in his name he is accused of being the hijacker. As victims are claimed, Marks discovers a bomb on board the aircraft which only exacerbates his predicament. Can he find the culprit in order to save the remaining passengers and prove his innocence?

Ever since his iconic role as Bryan Mills in Taken, Liam Neeson has found himself typecast as an older disheveled action hero with a “special set of skills” across a number of subsequent movies. Non-Stop takes the tried-and-tested Neeson formula of a reluctant anti-hero and places him aboard an international flight where a terrorist threatens to kill a passenger every twenty minutes. The high-concept hook has echoes of Speed and Passenger 57 with a murder-mystery twist that keeps Neeson and the audience guessing throughout. Living up to its title, Non-Stop doesn’t let up the tension as US Air Marshall Bill Marks must not only contend with the demands of his mysterious terrorist, but also the suspicions of the passengers and crew. Despite its restrictive setting of a passenger airliner, director Jaume Collet-Serra does a great job at maintaining the action and pace of the story without making the film feel claustrophobic.

Despite his familiarity with the archetype, Neeson manages to inject a real sense of personality to the role of Bill Marks, subtly distinguishing him from the anti-heroes from his previous films. Marks is a man tortured by past failures and it is these flaws that end up making him the perfect target for the terrorist’s plan. Neeson is effortlessly charming as the damaged Air Marshall that it is no surprise why he continually gets cast in these types of films. Neeson is one of those few actors, along with Mel Gibson, that can bring a natural gravitas and world-weariness to this type of role that other younger action leads such as Jason Statham and The Rock lack. There is an edginess to Neeson’s performance that makes you sit up and take notice, and is dramatically different from the typical Hollywood sheen that most action heroes have.

With the film’s antagonist kept secret throughout the majority of the run time, director Jaume Collet-Serra has fun playing with audience expectations and teasing a number of potential suspects. The camera often lingers on suspicious faces, heightening audience paranoia and it kept me and my wife guessing throughout (“It can’t be him, can it? It’s too obvious!”). The film definitely throws some curve-balls into the narrative, although the motivation behind the attack doesn’t quite ring true. There are a few plot contrivances – the main one being the excellent Wi-Fi service aboard the airliner and the fact that the passengers are able to watch breaking news reports live from their seats. However, this is a popcorn movie and some leaps in logic have to be forgiven to get to the action. The film never quite tips the balance into make-believe, but there were a number of moments in the terrorist’s plan that seemed to hinge on luck instead of planning.

The film has a great supporting cast, although I won’t spoil who plays the secretive villain of the piece. Julianne Moore does well as a passenger dragged into the situation by Marks, and Corey Stoll is extremely watchable as an aggressive NYPD cop. I also liked Anson Mount as Marks’ antagonistic partner and the nervous flight attendant Nancy, played by Michelle Dockery. I was also surprised to see Lupita Nyong’o of Black Panther fame in an early role, although she doesn’t get too much to do aside from look concerned. The chemistry between Neeson and Moore doesn’t quite sparkle, and they seem to tolerate each other rather than share any real attraction. With Neeson playing Marks as a borderline psychotic, it seems unlikely that he would be able to charm any woman with his paranoia and frequent usage of excessive force. There are moments where he seems more of a risk to the safety of the passengers than the terrorist does. 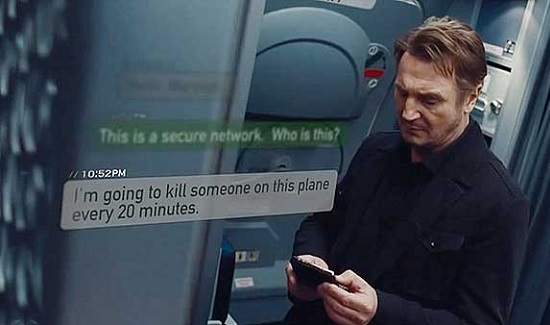 Non-Stop works hard to stop itself from being “Taken on a plane”, and while it’ll naturally be pigeon-holed as that by some viewers, it is also reminiscent of a number of other movies. Even though it is a spoof of disaster movies, Airplane! frequently came to mind as I watched, especially whenever the plot focused on the little girl who was travelling on her own for the first time. Obviously, Non-Stop plays it completely straight, but I think Airplane! has just soured any sort of serious plane drama for me. Plot-wise, the film shares a lot in common with Source Code, specifically that race against time to uncover a secret terrorist on public transport. I was also reminded of Die Hard with a Vengeance, and the “Simon Says” chase across New York, as Neeson also felt at the mercy of his anonymous antagonist. With the film feeling derivative of so many others, there are no standout moments of originality that linger in the mind past the closing credits, although the zero-G shootout represented on the film poster is probably the most iconic sequence.

A tense murder-mystery in an unusual setting, Non-Stop succeeds in giving Liam Neeson fans exactly what they want and expect from the actor. A huge part of the film’s charm is Neeson himself and the magnetic presence he brings to his roles. He is intensely watchable and surprisingly nuanced as an action hero. His gruff Irish tones are like a melody for action junkies, and while Non-Stop has less of a body count than his Taken movies, he manages to make it utterly thrilling throughout. I can’t imagine anyone else doing justice to this role, Neeson completely embodies the character and elevates the sometimes dodgy material into a fantastic popcorn movie. Solid fun throughout, Non-Stop is a trip well worth going on.

Non-Stop is available on Blu-Ray and DVD from Amazon UK, as well as available to stream on Netflix.