Synopsis: After his family is kidnapped during their sailing trip in Spain, a young Wall Street trader is confronted by the people responsible: intelligence agents looking to recover a mysterious briefcase.

Predating his breakout role in Man of Steel by a whole year, The Cold Light of Day features a younger Henry Cavill attempting the action hero role based upon his appearances in The Tudors and the movie, Immortals. Despite his relative inexperience as a leading man, Cavill does a fantastic job at commanding the screen even when he is paired up against Hollywood legends such as Bruce Willis and Sigourney Weaver. There’s a sense of realism to Cavill’s performance as he is thrust into a web of conspiracies and spies following the abduction of his family, and he is forced to keep up with the action or be killed. Formerly a Wall Street hotshot, Cavill’s character Will Shaw doesn’t become an action hero the minute a gun is given to him, instead he improvises and attempts to last long enough to discover the truth. In some ways the film reminded me of the Alfred Hitchcock classic, North by Northwest with his similar themes of an ordinary man sucked in by extraordinary circumstances.

While Bruce Willis is featured prominently in the advertising of this film, he has a limited amount of actual screen time and seems to be dialing in his performance somewhat. Arguably, Willis hasn’t been at the top of his game since Sin City in 2005, and his appearance in this film is nothing more than a glorified cameo designed to draw viewers in. Luckily, Cavill is charismatic enough to keep viewers engaged once Willis has cashed in his pay check and moved onto his next Direct-to-DVD film. While Willis does bring a natural gravitas to the character of Martin Shaw, Will’s mysterious father, he doesn’t really seem to do anything interesting with the character aside from give Will disapproving looks for being on his phone a lot. While his departure a quarter of the way through the film is shocking, it leaves the movie feeling a little bit hollow as he is not present to deal with the ramifications of his actions.

Sigourney Weaver is the other veteran actor in this film, portraying the main antagonist with the right level of menace and control. Even though she is a villain in this movie, she manages to exude the same toughness as she did as Ellen Ripley in the Alien franchise and is extremely watchable as a calculating double agent. Having a strong, older woman as the main villain is much more interesting than the stereotypical male mastermind behind events, and Weaver looks like she had great fun with the role. Spanish actress Verónica Echegui has a notable role as the female lead alongside Cavill and the film subverts genre expectations and avoids making them a romantic couple – opting for a more meaningful connection instead. In fact, the film frequently tears up the ‘action movie’ rule-book and this results in a fresh and inventive storyline that relies on mystery reveals alongside action set-pieces.

Shot on location in Spain, the film sports an authentic European flavour which helps to distinguish it from the countless action movies set in America. The scenery is beautiful, especially the blue seas and sandy beaches at the beginning of the film, and it is refreshing to see the Spanish streets as the backdrop to the various chases by foot or by car. The film plays upon that feeling of isolation as a stranger in a strange land once Will discovers his family are missing and he is left alone trying to find out what happened to them. That idea of being abandoned abroad is a primal fear, and I’ve always enjoyed films that have showcased that idea of being out-of-place in a foreign land, such as the classic Harrison Ford thriller Frantic. 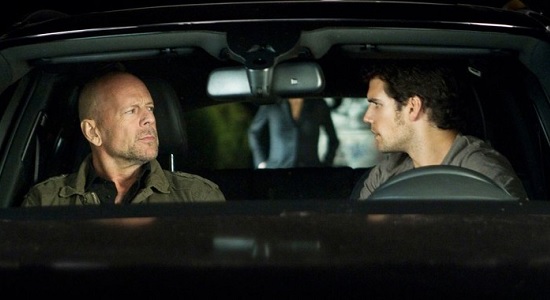 I really enjoyed The Cold Light of Day for its slight deviations from the typical Hollywood action movie formula and Henry Cavill continues to prove himself to be strong leading man out-side of the DC Universe. I really enjoyed him as Napoleon Solo in The Man from U.N.C.L.E, and while he is slightly less polished and suave here in this earlier role, he manages to charm the audience as the in-over-his-head Will Shaw. While Bruce Willis’ flat performance and early exit is a disappointment, it is to be expected of the actor given his attitude in movie interviews and his plethora of cameo appearances in Direct-to-DVD movies during the past decade. It is almost a distraction to see the well-known actor deliver such a lackluster performance and slope off-screen after fifteen minutes of screen-time. Given some of the reveals of his secret life throughout the film, it was disappointing that he wasn’t around to answer for his mistakes and the film felt slightly incomplete because it lacked that catharsis and confrontation.

Extremely Hitchcockian in nature, The Cold Light of Day is an exciting thrill-ride through the streets of Spain on the hunt for a mysterious MacGuffin – which is about as Hitchcockian as a film can hope to be! Henry Cavill shines as an “everyman” version of Bond, riding on the wave of Bourne Identity knock-offs to deliver a surprisingly original take on the genre. While the film has some laughable moments, mostly relating to Bruce Willis’ one-note performance, it still manages to entertain and excite throughout its hour and a half running time. It may not be remembered as an all-time classic of the genre, but it is a great popcorn ‘date movie’ if you fancy something a little bit different from the beaten path – just don’t go in expecting to see Bruce Willis do anything aside from raising his eyebrows.

The Cold Light of Day is available on Blu-Ray and DVD from Amazon UK, as well as available to stream on Amazon Prime Video.