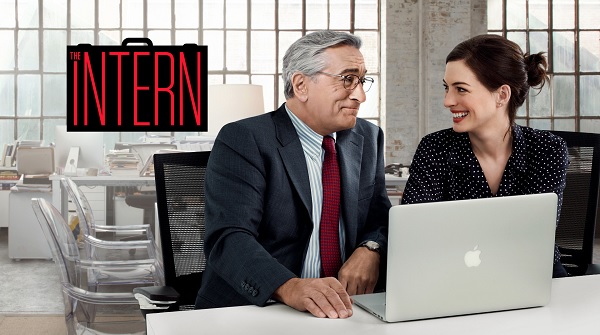 Synopsis: Seventy-year-old widower Ben Whittaker has discovered that retirement isn’t all it’s cracked up to be. Seizing an opportunity to get back in the game, he becomes a senior intern at an online fashion site, founded and run by Jules Ostin; a career-driven woman who is struggling with her own success.

Gentle with its comedy, The Intern is a curious “fish out of water” story about a seventy-year-old “senior intern” thrust into the modern office environment of coffee runs, emails and website analytics. Robert De Niro’s character Ben is almost messianic in his presence as he solves all the problems for the thirty-something millennials attempting to run a successful online fashion website. The focus of the movie is his relationship with his new boss – almost forty years his junior – and how her initial dismissal of him grows into reliance as she faces challenges both at home and at work. The script seems too intent on its “capable seniors” message that it sometimes overlooks the need for drama, and the one moment of genuine conflict is immediately resolved when it transpires that his employer already knows the secret he has to divulge. As a result, the film feels a bit flat and slow-paced with a subdued third-act that doesn’t really work.

The chemistry between the two leads, Robert De Niro and Anne Hathaway, is pivotal to the success of the film and the odd father-daughter bond that builds throughout the movie is enjoyable to watch grow. Hathaway manages to play company CEO Jules Ostin as both strong and vulnerable, bringing a real humanity to the character that stops her from being the typical “professional female” stereotype. De Niro plays Ben as inquisitive, pragmatic and kind; although he comes across as too good to be true, and I almost found myself siding with Jules when she considered having him relocated because he is “too observant”. Ben says and does all the right things and as a result, he doesn’t feel like a realistic character. While I understand that his lifetime of experience grants him some knowledge of how things work, he never puts a foot wrong in the whole movie and manages to patiently help Jules come to terms with her own shortcomings in both her professional and personal lives like a fairy Godfather. No, not that kind of Godfather… 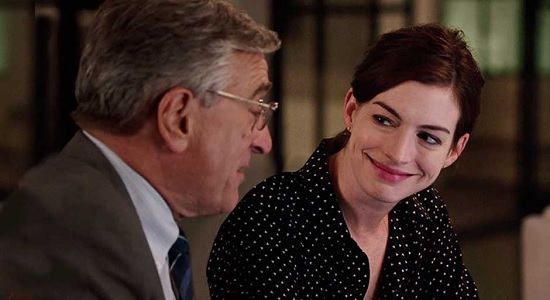 Written and directed by Nancy Meyers, The Intern feels tonally similar to some of the other movies in Meyers’ back catalogue such as; Something’s Gotta Give, It’s Complicated and What Women Want. She hits familiar notes in her movies, such as showcasing the older generation and female empowerment, and ultimately presenting a saccharine and heavily stylised version of life. Despite the title of the film, it is Anne Hathaway’s Jules Ostin that undergoes the most character development through the film as she faces pressures at work and at home. While Meyers initially depicts Hathaway as a strong and capable woman, she gradually exposes her insecurities when she is forced to hire an outsider to act as her superior because the investors feel uncertain of her abilities; and later on, she discovers secrets and lies within her home life too. My biggest criticism about the film was the way that she forgave her husband, almost blaming herself for his transgressions and ultimately waited for his ‘permission’ before attempting to fight for her job. It felt like a bit of a cop-out, and I’d have much preferred Ben to take on a mentor role and help prepare her to interview for her own CEO job.

At over two hours long, the film feels a tad stretched out and sequences such as when Ben and the other interns in the office break into Jules’ mum’s house to retrieve an email felt like padding and a way to inject excitement into a relatively slow script. There was also a rather unremarkable love interest for Ben in the office masseuse, played by Rene Russo, just to give Ben some kind of reward for his bravery in returning to work post-retirement. The film could easily have been trimmed by half hour and still maintained the same narrative. The film’s weak third act, and its rather low-key resolution, also contribute to the feeling that nothing really happens in this film. We are never given a face to the alternate CEO that threatens to push Jules out of her job, and to be honest, we’re not really given any indication that Jules is actually good at her job apart from the fact that she cares about the end product. I think it would have made more of an impact if we’d seen her “win” or achieve something. 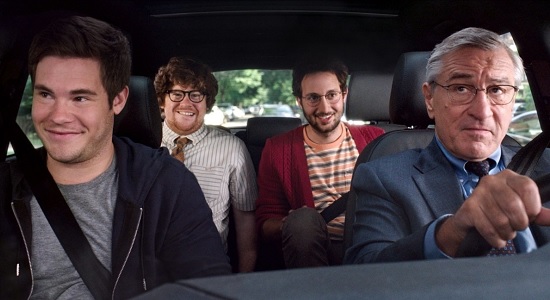 The Intern begins as a story about a seventy-year-old returning to work in a modern landscape, but quickly transitions its focus to the struggles of a thirty-something female CEO. While the film pokes fun at its central conceit of a “senior” intern, it never really capitalises on the possibilities as it quickly switches the focus onto Hathaway. The relationship between the two actors is the main draw in the film and De Niro does a terrific understated performance as Ben Whittaker. De Niro has incredible range as a actor, able to play menacing gangsters and comedic roles in equal measure – his performance here as Ben is more subdued than anything we’ve seen before from the actor, yet doesn’t feel dialled in at all. Hathaway manages to bring a true sense of realism to her role of Jules, even if I didn’t agree with all of her decisions. The supporting cast felt somewhat more generic aside from Adam Devine, who seems to pop up a lot in these types of films as the smarmy best-friend. Rene Russo did a great job with the brief appearances she made, and the sequence where her and Ben described their lives in a short paragraph made me want to see more about their characters.

The Intern isn’t a bad film by any means, it just failed the make the most of its intriguing premise. There was never really any tension in the movie, and even the moment that seemed poised to cause major drama was diffused relatively easily. The final act definitely weakened the film with an infidelity storyline that didn’t need to be there, and seemed to exist in an effort to create a problem to be solved. It would have been far more satisfying if the film had focused on its premise of “old dogs teaching new tricks” and made more use of Ben’s position as a senior intern helping out Jules. It felt almost as if the movie swerved at the last-minute and avoided focusing on its septuagenarian lead for fear of alienating its millennial target audience. However, despite my criticism of some of the narrative decisions, I did enjoy the chemistry between De Niro and Hathaway and the laid-back pace made it a somewhat comforting film to watch, which is a statement that could be applied to any of Meyers’ other movies.

The Intern is available on Blu-Ray and DVD from Amazon UK, as well as available to stream on Amazon Prime Video.