Synopsis: In a world where families are limited to one child due to overpopulation, a set of identical septuplets must avoid being put to a long sleep by the government and dangerous infighting while investigating the disappearance of one of their own.

Set a few decades from now after over-population has hit crisis point, What Happened to Monday explores an Orwellian-esque dystopian future where the government introduces a strict one-child policy worldwide. All siblings apart from the eldest child are cryogenically frozen and stored away with the aim to defrost them in the future once the world has become more sustainable. In a cruel twist of irony, the genetically-modified foods that the populous relies upon to feed the over-populated planet causes a spike in multiple births, which is what leads to Terrence Settman hiding his daughter’s septuplet daughters after she dies in childbirth. Named after each day of the week, the identical sister’s share one-seventh of the life of the fictitious Karen Settman, and are only allowed out on the day that shares their name after undergoing a strict debriefing every night to ensure that her life remains consistent to the outside world.

Noomi Rapace is simply incredible in the lead role of this film, playing each of the Settman sisters on-screen at the same time. The cinematography and acting is so effective that I genuinely forgot that it was the same actress playing multiple roles. The film is so buoyant with action that I often took it for granted that they must have had to shot scenes multiple times to get each of the Settman sisters’ performances captured. Other films have attempted this gimmick, most notably The Nutty Professor and The Parent Trap, but I would have to say that What Happened to Monday is the only one that had me overlook the technicalities of it and immerse myself fully into the tale. Rapace deserves commendation, not just for the sheer exhaustive effort it must have taken but also for the attention to detail she gives to each of the characters even when they aren’t the focus of a scene. Equally as impressive is Clara Read, who plays the younger versions of the characters with just as much skill and emotion as her older counterpart.

While the film has science-fiction elements at its heart, it is primarily a neo-noir thriller which focuses on the disappearance of the eldest sister, Monday, and how the remaining six sisters work together to find their missing sibling. The film is surprisingly brutal at times, often eliciting shock as characters are frequently shot in the head. It happened so often that I got anxious whenever there was a close-up on someone talking because I was expecting another headshot to take place. The violence is swift and shocking in its execution, resulting in a tense atmosphere as the movie quickly establishes that no-one is safe. There is a strong nihilistic vibe to the film, and while some of the plot twists are guessable from the outset, they still land the right emotional impact when they are revealed.

Thematically, the film bears a strong similarity to the classic sci-fi masterpieces such as Logan’s Run and Soylent Green, both of which also tackled the concept of over-population in the future. What Happens to Monday has a distinct European flavour to it, emphasised all the more by director, lead actress (Wirkola is Norwegian and Rapace is Swedish) and the architecture of the nameless metropolis in which it takes place. Visually, the movie bears likeness to The Hunger Games and more modern takes on dystopian futures, although it could easily pass for a Luc Besson film at times. Rapace evokes memories of Milla Jovovich as Leeloo in The Fifth Element, and her performance in those movies deserves to attract the same mainstream attention. 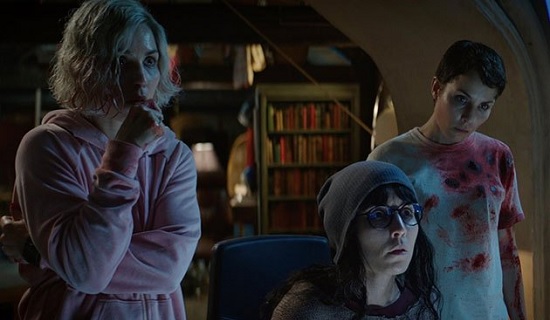 Uncompromising in its bleakness, it is difficult to talk about What Happened to Monday without revealing some of its more devastating plot twists. The most haunting aspect of the movie is just how feasible it could become, with China already instigating a ‘one child policy’ during 1979-2015 and global population increasing every year. While the actions of the Child Allocation Bureau (CAB) are morally corrupt here, the central argument surrounding restrictions on child birth is compelling and less clear-cut than the film presents. The film positions the CAB as a negative organisation, although one could argue (and Glenn Close’s character does) that these inhumane actions seek to prevent a global catastrophe later on. The film occasionally flirts with the bigger picture, but ultimately the narrative is restricted to that of the Settman sisters and their personal struggles. Even at the end of the film, there is an air of uncertainty about the long-term future as the events of the movie begin to have ramifications across the globe. One could argue that the world would have been a safer place if our heroes had failed in their quest and the villains maintained their sinister conspiracy, but unfortunately the film never really delves into that idea.

What Happened to Monday is a spiritual successor to the dystopian fiction from the 1970s, loaded with all the visual flourishes and special effects that a modern-day feature can provide. Noomi Rapace manages to wow audiences seven times over, and her strength as an actress is evident throughout. I was so completely enthralled by her performances that I was convinced she had six sisters working alongside her. As a Netflix Original, the film continues to uphold the streaming services’ ability to create strong, narrative-driven movies that sit slightly askew from the mainstream cinema. If this film had been produced for a typical cinematic release, I suspect it would have undergone some changes and some of the sharper edges may have been filed down. There is a sense of authenticity and quality that comes from the Netflix brand, and this movie is another fine example of the fresh voices it brings to the fore. Well worth checking out if you fancy a bleak, brutal view of the future.

What Happened to Monday is available exclusively to stream on Netflix.