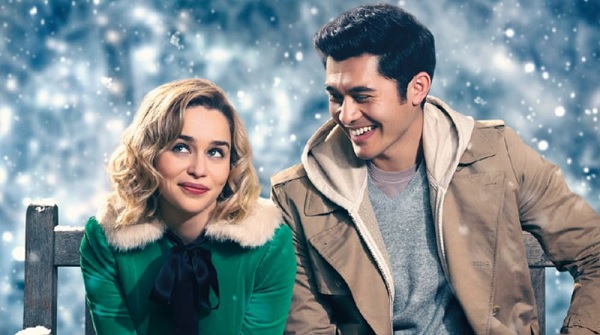 Synopsis: Kate harrumphs around London, a bundle of bad decisions accompanied by the jangle of bells on her shoes, another irritating consequence from her job as an elf in a year-round Christmas shop. Tom seems too good to be true when he walks into her life and starts to see through so many of Kate’s barriers. As London transforms into the most wonderful time of the year, nothing should work for these two. But sometimes, you gotta let the snow fall where it may, you gotta listen to your heart … and you gotta have faith.

Inspired by the Wham! song of the same name, Last Christmas is a seasonal romantic comedy that makes use of George Michael’s extensive musical back catalogue to tell the story of a young singer called Kate (played by Emilia Clarke) who is struggling to adapt after surviving life-threatening heart surgery. Selfish, sarcastic and in a spiral of self-destruction, we meet Kate at her lowest after she has spent the past twelve months pushing friends and family out of her life as a result of her brush with near-death. Clarke does a great job at making the character spiky and unlikeable – perhaps too well, as I initially found her to be rather annoying with her constant sniping comments. However, once she meets her handsome stranger in Tom, those prickly bits begin to soften and we get a glimpse of the real Kate underneath.

I was somewhat divided on Clarke as an actress as she seemed to over-egg her performance at times, providing excessive facial reactions that made her seem a bit cartoonish. However, as she begins to develop as a person, she became less of a pantomime character and nails some of the more emotionally demanding moments of the script. I also struggled with some of the performances of the supporting characters, such as Emma Thompson using an exaggerated Yugoslavian accent, or the cringeworthy moments between Michelle Yeoh’s Santa and her own love interest. On the other side of the spectrum is Henry Golding with his effortlessly charming take on Tom, although he instantly sets off the “too good to be true” meter after his second or third appearance in Kate’s life. I had to remember that I’m not the target audience for romantic comedies and as such, some of the more saccharine tropes of the genre didn’t quite gel with me, such as the quirky friends and supportive community. Maybe I’m just a cynic… 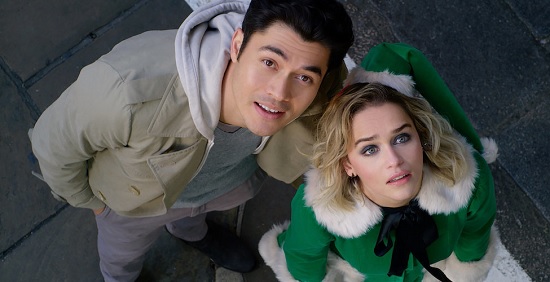 To be honest, if Last Christmas was a standard romantic comedy, it probably would have scored a lower rating, but the film does something surprisingly bold in its final act that forced me to reconsider the whole movie. If you don’t want to be spoiled, stop reading now!

Knowing how these types of films are traditionally structured, I was expecting some sort of conflict between Kate and Tom to occur towards the end of the second act, in order to fuel a reconciliation and big romantic gesture at the end. True enough, Tom started to act a bit shifty and I was suspecting him of having a wife, or when it was revealed that Kate’s operation was a heart transplant, I thought that she might have the heart of his wife inside her. The reveal that it was actually his heart and he was a ghost/hallucination was a genuine shock, and I have to applaud the scriptwriters for blindsiding me with that one. With the rug pulled out from underneath, it completely shifted the meaning of the film and Kate and Tom’s relationship. It was no longer about finding love after a traumatic event, but learning to love oneself and be a better person.

The logic of the actual reveal was a bit shaky, as it is never explained whether “Tom” was a ghost or a figment of her imagination. I would lean towards him being an actual ghost, as otherwise Kate’s mental state is extremely fragile, plus it would explain his quirky personality as Kate technically would never have known him to attribute his “Look Up” philosophy to an imaginary friend. As with The Sixth Sense, the clues were all there if you’d been paying attention, including the lyric from the song, “Last Christmas, I gave you my Heart”.

Maybe it was a side-effect of the coronavirus lockdown, but watching Last Christmas made me realise how much I miss London and it was nice to see it shot on location, showcasing the beauty of the city. There were some moments that made me cringe, however, such as the ham-fisted introduction of Brexit into the storyline. It made me wonder whether the decision to make Kate and her family Yugoslavian was so they could specifically include that bit of social commentary about immigrants feeling unwelcome in the UK following the Brexit vote. It was strangely out of place and didn’t really seem to align itself with the main plot at all, and if anything, it will significantly date the film for future generations. It would be like watching Pretty Woman and having a few scenes of the characters discussing the Gulf War in the middle of it.

While the film did make use of George Michael songs in its soundtrack, it never felt integral to the plot aside from the fact that the lead character frequently carried her iPhone and listened to his songs, and the tangential reference to the lyrics of “Last Christmas”. That said, I do love his music and it was nice to hear renditions of “Faith” and “Freedom! 90” sprinkled throughout the film, and Emilia Clarke’s performance of “Last Christmas” in the finale was really good.

Very different to what I expected from the trailer, Last Christmas manages to both embrace and subvert romantic comedy tropes. The twist ending elevates the film beyond the typical offerings in the genre, resulting in a surprisingly emotional ending that delivers a different type of message to its audience. While it is far from a perfect rom-com, it does manage to stand out from the crowd with its bold storytelling choices and association with George Michael’s music.

Last Christmas is available on Blu-Ray and DVD from Amazon UK. It can also be streamed via Amazon Prime Video.