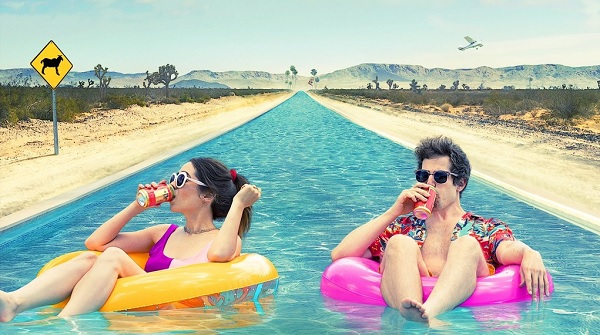 Synopsis: When carefree Nyles and reluctant maid-of-honour Sarah have a chance encounter at a Palm Springs wedding, things get complicated when they find themselves unable to escape the venue, themselves and each other.

Every now and then a film will come out that will become the shorthand for a whole genre of movies, much like how the brand Biro is erroneously used to describe all ballpoint pens, or how people say Hoover instead of vacuum cleaner. Groundhog Day is one of those films, and is often used to quickly describe films that involve a time loop. The iconic Bill Murray classic came out in 1993 and has become synonymous with the time loop plot device ever since; to the point where any attempt to use a time loop in a story feels like a poor imitation. However in recent years there has been a number of movies that have attempted to modernise and refresh the formula, such as Source Code and Happy Death Day. While both of those examples distinguished themselves by focusing more on action and horror, Palm Springs revisits the central romantic comedy premise of Groundhog Day but with a post-modern perspective.

Produced by The Lonely Island and starring Andy Samberg, Palm Springs is rooted in irreverent comedy and skews the typical time loop format by beginning the film midway through the process. Samberg’s character Nyles has experienced the loop countless times before we meet him, giving the film the feel of a sequel to an unproduced film. The film actually makes use of the audiences’ familiarity with Groundhog Day (“This is one of those infinite time-loop situations you might have heard about”) to bypass the set-up and discovery of the situation and to get into the main action of the plot. It’s a refreshing change of pace and gives Samberg’s Nyles a world-weary journeyman quality that is endearing as he introduces Sarah to the inner-workings of their repeated existence.

Andy Samberg is one of those actors who feels like he is on the verge of breaking out into super-stardom, with his popularity as part of The Lonely Island and his role in Brooklyn Nine-Nine, but he has yet to break Hollywood in a meaningful way. Films like Hot Rod and That’s My Boy haven’t quite brought him into the mainstream, but Palm Springs might be film that gets him wider recognition. He is extremely likeable as Nyles, a man who has relived the same day so often that he has lost all sense of consequence and his excellent chemistry with Cristin Milioti’s Sarah forms the gooey centre at the heart of the film. Milioti totally shines as the emotionally chaotic maid-of-honour thrust into the time-loop and delivers a brilliant comedic performance, riding high on her standout role in the frankly stunning Black Mirror episode “U.S.S Callister”. She is definitely an actress to keep an eye on for the future!

Palm Springs is a beautiful setting for the movie and gives the film a vibrant identity in the same way that Punxsutawney represented small-town living in Groundhog Day. There’s something extremely appealing about bobbing about in an inflatable pool toy against the California sun day-after-day for all eternity. It’s a brilliant aesthetic that suits the film perfectly, so it’s unsurprising that it ended up becoming the title. Nyles exudes an effortless cool as he lounges his way the days’ events continually clutching a can of beer; his constant companion throughout the many iterations of the wedding. As with all time loop films, a lot of the fun comes from subverting the normal flow of events and reinterpreting the same events in different ways. Despite the familiar subject matter, Palm Springs manages to feel fresh and original, much in the same way that Zombieland injected a dash of originality into the overdone zombie genre.

At its heart, Palm Springs is a love story and arguably it succeeds at this much better than Groundhog Day ever did. Here, both Nyles and Sarah experience the time loop together and fall in love on their own terms having been forced to spend countless iterations of the same day together. In Groundhog Day, it is very one-sided and Andie MacDowell’s Rita never really gets to experience Phil’s growth and lacks any agency to make up her own mind as events are manipulated to influence her choices. The final speech between Nyles and Sarah is exceptionally sweet and offers a more grounded view of love than most romantic comedies. I also like that Nyles is portrayed as reluctant to leave the time loop and the security of knowing everything that will happen in that day. After an undetermined amount of time reliving the same experience again-and-again, it must be terrifying to move on from that.

Palm Springs is a refreshing modern-day reworking of Groundhog Day that avoids falling into the trap of mimicry. Clearly influenced by the 1993 time-loop classic but not afraid to make its own narrative choices, Palm Springs has a razor-sharp script that bristles with wit and two leading performers that sell the premise well. It seems strange to call a film ‘original’ when it shares so much DNA with another, but it feels like Palm Springs takes the foundations established by Groundhog Day and builds a whole different movie on top of it. There’s a sense of fun to this movie that is extremely infectious and perhaps it was because the concept of reliving the same day again-and-again felt a tad too relatable after COVID-19, but this was one of the most enjoyable and fulfilling films I’ve seen this year. It’s definitely on par with Groundhog Day, and may even hold up better in the long run. I guess, only time will tell. (Yeah, sorry for that pun!)