Synopsis: During the Crimean War, the Doctor discovers the British army fighting a brutal alien army of Sontarans, as Yaz and Dan are thrown deeper into a battle for survival. What is the Temple of Atropos? Who are the Mouri?

After a chaotic and sub-plot heavy opening episode, the second chapter of Doctor Who: Flux adopts a more focused approach to its storytelling with three distinct storylines that follow each of the TARDIS crew. Splitting the team up gives each individual character the opportunity to stand out in a way that previous Thirteenth Doctor episodes have struggled with. Whittaker’s Doctor felt particularly empowered here, trapped in the Crimean War against a seemingly unstoppable Sontaran army, whilst Yaz got the opportunity to show her own initiative and leadership skills when stranded in the mysterious Temple of Atropos. John Bishop continues to impress as the immensely likeable everyman Dan, and part of me wishes he’d been part of the original line-up when the Thirteenth Doctor debuted.

Teased in the previous episode, the Sontarans take advantage of the Flux to invade Earth – although they seem rather unconcerned about what remains outside the Lupari shield. In fact, it’s not actually made clear what exists (if anything) outside of the shield and what the Flux has done. The sudden shift from last episode’s cliff-hanger to the beginning of this episode leaves plenty of questions unanswered about the nature of the Flux, but there is an intriguing black-and-white sequence that features a bizarre house structure floating in a wasteland which suggests some kind metaphysical plane of existence. As with the mysterious 1820s gentleman popping up at the Temple of Atropos, these brief hints are designed to get us rubbing our chins with curiosity. However, unlike last episode, it doesn’t feel overwhelming. 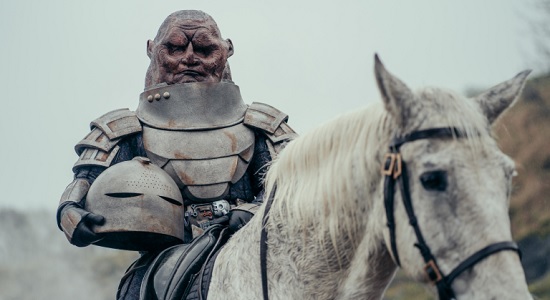 Returning to the original Sontaran design is a great move as they have a much more effective look; somehow managing to look menacing whilst also resembling a jacket potato. The lumpier faces and darker armour are a better fit for the characters than the modern redesign that was introduced in “The Sontaran Stratagem”, which seemed to be more aimed at selling action figures than inspiring fear in its audience. Despite the new (old) look, the Sontarans continue to strike the balance between humour and horror as their bloodthirsty antics contrast against their low intelligence and ability to be defeated by a slingshot or wok to the probic vent. Chibnall’s script doesn’t hold back from showing the brutality of the Sontarans, whether it is the massacre on the battlefield or the sudden execution of ‘human spies’. I also liked the moment when Commander Skaak stuck his tongue out to lick his lips creepily, referencing a similar moment with Commander Linx from the original Sontaran storyline, “The Time Warrior”.

The Crimean War is another period of our history that I’m unfamiliar with, having just a casual knowledge of Florence Nightingale and Mary Seacole and once again, Doctor Who prompts me to find out more about this period – even if it was the Russians they were fighting and not the Sontarans! Sara Powell’s Mary Seacole made for a strong temporary companion and I enjoyed the predictable arrogance and cowardice of General Logan. Another highlight was how the Doctor and Dan worked together across the two time zones to defeat the Sontarans at both ends of the timeline; it gave the episode a real sense of scale as opposed to containing the action to one single time period. I was also pleasantly surprised to see Brookside royalty Jackie Corkhill (aka Sue Jenkins) appear as Dan’s mum, further bringing a shot of Liverpudian charm to this series.

The other prominent story-arc in this episode involved the mysterious Mouri and the Temple of Atropos as Yaz and Vinder were transported there to help with ‘repairs’. I felt the explanation behind this sudden new bit of Doctor Who lore was a bit wishy-washy; apparently the Mouri were physical representations of time or they were conduits that time passed through. It seemed as if they were ultra-important, but we were really told why and rather annoyingly they were yet another thing that the Doctor was completely unaware of; further pushing her out of her typical ‘know-it-all’ comfort zone. Presumably accessible now that the Flux had been unleashed, Swarm, Azure and their new (and unexplained) companion Passenger also arrived at the Temple to cause destruction, but not without a bit of grandstanding and some bad-guy monologues. Considering Swarm and Azure are able to disintegrate objects with a single touch, I was surprised that they opted to let Yaz and Vinder live, although their ultimate motive remains unclear. The three of them reminded me of the trio of Kryptonian villains from Superman II; Zod, Ursa and Non and I wonder if this series will end with the three of them trapped in a 2D rectangle floating through space!

With two episodes down, Doctor Who: Flux is beginning to take some sort of shape although it feels as if there are some major puzzle pieces needed before the bigger picture is revealed. My own personal theory (although it changes daily) is that Swarm, Azure and Passenger are somehow attempting to bring themselves into existence in some kind of ‘ouroboros’ paradoxical loop; or that they are the ones who are responsible for rewriting the Doctor’s history and creating the Timeless Child retcon with some sort of Crisis on Infinite Earths multiverse merging that rewrites the Doctor’s origins. As always, I am excited by the opportunities and risk involved in these drastic changes to Doctor Who lore, yet concerned that Chibnall might write himself into a corner that a future writer will have to undo. Still, I can’t deny that this is the most exciting Doctor Who has been in years, and has me in a state of anticipation for each weekly episode; something I’ve not felt since watching Lost and Breaking Bad.

“War of the Sontarans” takes the baton from “The Halloween Apocalypse” and while it slows the pace slightly, it continues to keep one step ahead of the viewer. If you were to remove all of the ‘Flux’ subplots from the episode, it would still leave us with a solid ‘Sontarans in the Crimean War’ storyline, but the added peril and excitement from the ongoing serialised plot just raises the stakes to a whole new level.

Next Episode: “Once, Upon Time”
On a planet that shouldn’t exist, in the aftermath of apocalypse, the Doctor, Dan, Yaz and Vinder face a battle to survive.