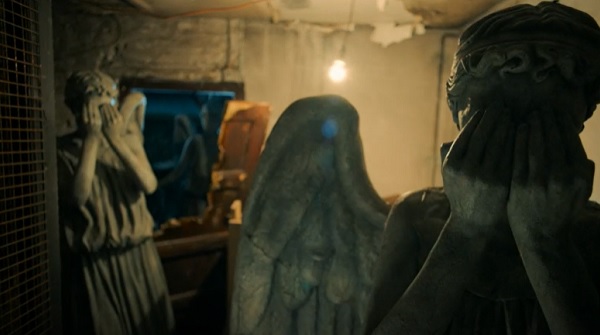 Synopsis: Devon, November 1967. A little girl has gone missing, Professor Eustacius Jericho is conducting psychic experiments, and in the village graveyard, there is one gravestone too many. Why is Medderton known as the Cursed Village, and what do the Weeping Angels want?

After a cluttered and haphazard episode in “Once, Upon Time”, I was hopeful that “Village of the Angels” would have a stronger central narrative focused on the titular monsters like “War of the Sontarans” before it. Aside from cameos in other episodes, the last time that the Weeping Angels were the main threat of an episode was back in the Eleventh Doctor’s era with “The Angels Take Manhattan”, so the stone-faced assassins have been due a return to the spotlight for some time. Chris Chibnall, along with co-writer Maxine Alderton, take the opportunity to revisit some elements of Weeping Angel lore that was introduced in “The Time of Angels” and “Flesh and Stone”, most notably the idea that the image of the Angel can produce an Angel in real life, and that they can live inside the mind of a human – both of which happened to Amy Pond in that two-parter. It’s a nice deep-dive of continuity and I liked how the pair developed the Angels beyond the basic “don’t blink” rule.

There was a creepy aesthetic to the episode and I enjoyed the whole “base under siege” vibe as the Angels swarmed the village to locate their target. As always, the logic faltered at times and sci-fi jargon like “quantum extraction” was thrown out as an explanation, but it didn’t quite cover the gaps. Presumably, the Quantum Extraction was a plot device to avoid having to address the current Flux storyline in these Earth-based events, separating the village of Medderton from the rest of the universe. I also felt there were moments where the “don’t blink” rule was inconsistent; times where no-one was looking at an Angel and it didn’t move and vice versa. It was also never explained how Dan, Yaz and Peggy escaped from the Angel that killed her guardians; presumably, they backed away very slowly without blinking? 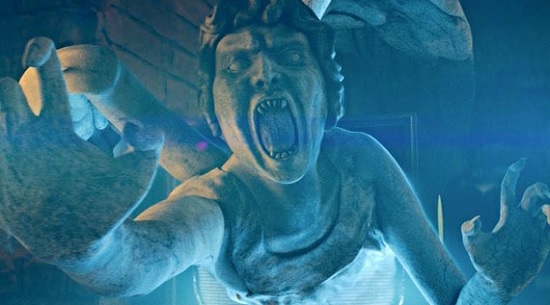 The sub-plot with Bel and ‘Neil from The Inbetweeners’ served as a brief interlude to remind us that the Flux is still affecting the whole universe and to give us a hint at what Swarm and Azure plan to do with the survivors. I’m not sure whether it was intentional or not, but I got a bit of a Monty Python’s Life of Brian vibe from the scene where Azure held her sermon on the mount and absorbed the grateful displaced survivors into the Passenger. Perhaps it was a mix of the religious undertones, the mountainous location and Blake Harrison’s costume, but it reminded me of the ‘big nose’ scene where Eric Idle’s character was struggling to hear Jesus. It was just the right amount of focus outside of Medderton, touching base with the ongoing Flux story-arc and sowing seeds for the next episode.

The episode held two big twists; both of which involved people turning into Angels. The reveal that Claire’s mind contained an Angel was a surprise, although the fact it was a rogue Angel that used to work for the Division was a bigger shock. I wonder if that Angel was one of the bodies occupied by Vinder or Yaz in last episode’s flashback; it is safe to assume that Dan was overlaid on top of Karvanista, judging by his weapon. Either way, I quite liked the idea that Angels had a sense of individuality; there hasn’t been much exploration into the origins of the Angels and with the Doctor herself becoming one at the end of the episode (spoiler alert!), I wonder just how the Angels come into being. I remember reading a theory ages ago that the Angels were corrupted Time Lords; perhaps there is some truth to that – especially since they used to work for the Division.

The ending cliff-hangers throughout this series have been superb, and this one might have topped the lot with the seriously impressive visual of the Doctor turning into stone and becoming an Angel herself. With her companions trapped in 1901, her TARDIS abandoned in 1967 and herself in the custody of the Angels, things look pretty dire for the future. As much as I have enjoyed this apocalyptic moments, the series hasn’t had much opportunity to slow down and focus on the characters – granted, events haven’t really given the Doctor the chance to sit down and decompress with her reacting to multiple crises at once. With the Doctor presumably en-route to the Division, hopefully we will start to get some answers and a chance to see how this has affected the Doctor on a personal level. With just two episodes left to go, I hope that we will start to see some of this scattered puzzle pieces begin to form – hopefully with better explanations that we’ve had so far.

“Village of the Angels” proves why the Weeping Angels are one of the best creations of modern Doctor Who; possibly surpassing the Daleks as nightmare fuel for children across the land. Adopting the familiar ‘base under siege’ template, there was an unrelenting sense of claustrophobia as the Angels made their way to Professor Jericho’s basement. The slow, staccato approach of the Angels makes them all the more terrifying as they follow their prey with a Pepe Le Pew-esque sense of inevitability. Chibnall has proven himself quite able to reinvigorate the series’ classic monsters (Sontarans, The Master, The Weeping Angels) so I wonder why he avoided doing it for so long during Season Eleven.

A marked improvement on the previous episode, Doctor Who: Flux seems to benefit when its flurry of ideas and sub-plots are supported by a strong core narrative; although rather worryingly, the remaining two episodes seem to indicate a return to the same scattered, multi-location storytelling seen in “The Halloween Apocalypse” and “Once, Upon Time”. While some of this series’ episodes have been the best Doctor Who stories in years, the ultimate success of this six-part miniseries (and arguably Chibnall’s era as a whole) hinges on the satisfying resolution of its mysteries – and I just don’t know how which way it will go.

Next Episode: “Survivors of the Flux”
As the forces of evil mass, the Doctor, Yaz and Dan face perilous journeys and seemingly insurmountable obstacles in their quest for survival.