Synopsis: Welcome to a world where time has become the ultimate currency. You stop aging at 25, but there’s a catch: you’re genetically-engineered to live only one more year, unless you can buy your way out of it. When a man from the wrong side of the tracks is falsely accused of murder, he is forced to go on the run with a beautiful hostage. Living minute to minute, the duo’s love becomes a powerful tool in their war against the system.

In a world where natural aging has been capped at 25 and individuals must earn extra their lifespan as a currency, there is a glaring economic divide between those living hour-to-hour in the ghetto and the practically immortal rich living in New Greenwich. Using sci-fi concepts, In Time is able to explore the financial inequalities of the real world in an exaggerated manner, although for those in poverty, they are doomed to an equally short life expectancy as the characters in this film. Going for aesthetics over details, little is revealed about how this society managed to monetize the aging process and the time clocks implanted into everyone’s arms and the film waves away such questions with its fast pace and momentum. Equally, the action is focused on the USA (isn’t it, always) so it is unclear what the situation is like in developing countries where financial inequality is rife.

Justin Timberlake is Will Salas, a 28-year-old trapped in a 25-year-old’s body, who lives with his mum, who is a 50-year-old trapped in a 25-year-old’s body. Unfortunately, the film doesn’t quite delve into the awkwardness of having a mum who looks the same age as the women who you are dating; in fact the film rarely touches upon this aspect of the anti-aging, opting instead to focus on the ticking clock that counts down towards death. The countdown is used quite frequently to increase tension with numerous moments when a person is living on their last seconds and is rushing to get a ‘top up’ from someone. People are able to transfer life essence to each other through physical contact, giving rise to high-stakes crime where the phrase, “your money and your life” has a whole new meaning. 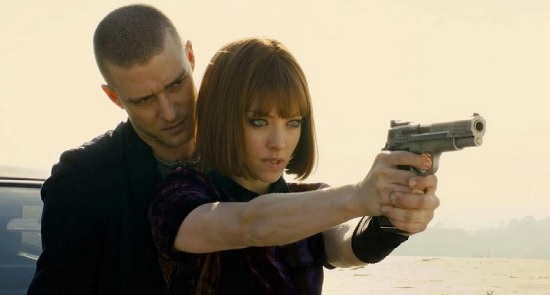 Rather than telling a story within this established set-up, In Time does what a lot of sci-fi movies do and concentrates on a protagonist smashing the system. Gifted with over one hundred years of time, Will takes off for New Greenwich in an effort to make time available for all in a half-baked Robin Hood plot. There is a brief conspiracy plot involving the rich hoarding the money and making things expensive for the poor to ensure that they can never leave their station, but it’s pretty much how economics work in the real world. There’s an aimlessness to the main plot with Will bouncing back and forth without much of an idea what to do, and the film suffers slightly from this lack of focus. There’s also a love-story thrown in with Amanda Seyfried as the spirited daughter of a millionaire banker, equally as committed to achieving financial equality to the masses.

Timberlake is likeable in the lead role, but as with the film itself, it seems to work better as an aesthetic as he lacks the same depth as some of his peers. Similarly, Seyfried is lovely to look at with her huge anime eyes but doesn’t really bring much to the character beyond her coquettish looks. Even the usually dependable Cillian Murphy feels underutilised as the determined ‘time keeper’ hunting the pair down. He doesn’t really get an opportunity to create a ‘cat and mouse’ relationship with Will, and doesn’t seem to have a motivation beyond “doing his job”. Even his death scene feels underwhelming, especially since it is the equivalent of forgetting to charge your mobile phone. I quite enjoyed Matt Bomer’s short stint as Henry Hamilton, the mysterious old man (in a 25-year-old’s body) who kick-starts the events of the movie, and Vincent Kartheiser as the hoarding millionaire, Philippe Weiss. Both actors left me wanting more from the characters.

The design of the cities feels authentic to this alternate timeline, providing glimpses of future technology but maintaining the same grounded and gritty feel as our own world. I particularly liked the design of the timer on the forearms, opting for a simple neon counter just underneath the skin as opposed to a complicated external device. There is an elegance to this design – which also highlights the inescapable biological element of the ‘body clock’ as opposed to some external control that can be removed or overridden. It reminded me somewhat of Logan’s Run – which had a similar theme around aging and over-population but had a more linear plot narrative as Logan journeyed to find ‘sanctuary’. The core concept of people earning time instead of finances is a brilliant one, and I’d loved to have seen that idea explored without the whole “overthrow the hierarchy” angle. The scenes at the start with Will using his time to buy a coffee and having to borrow extra time off his mum for lunch were most interesting to me, and I’d have liked the film to focus more on Will as a fugitive and less on the changing the system.

Overall, In Time is an intriguing movie that has some wonderfully original ideas but quickly slips into a familiar plot structure. You could technically substitute the ‘time’ for actual money and most of the storyline would run in exactly the same way. I’d have liked the film to focus more on its unusual premise and see more of Timberlake attempting to fit in amongst the rich after living life in the fast lane as a poor person. Focused more on style over substance, both in terms of its plot and its leads, In Time doesn’t quite get the most out of its wonderful central premise but is enjoyable enough as a lightweight sci-fi adventure.

In Time is available on Blu-Ray and DVD from Amazon UK, as well as available to stream on Amazon Prime Video.