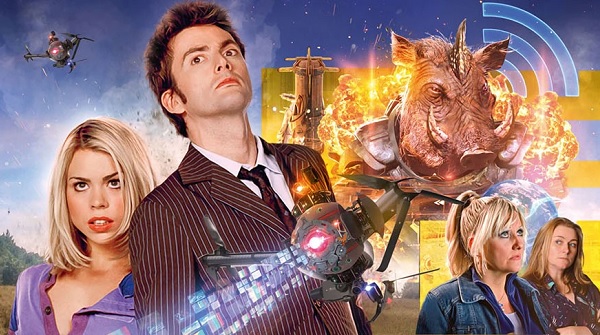 Synopsis: When Jackie Tyler takes a trip to visit her old friend Marge in Norwich, she finds her holiday immediately interrupted in the worst way possible – an alien invasion! The infamous Zaross have come to take over the Earth. Or have they? After Jackie calls in the Doctor and Rose to deal with the menace, it soon becomes clear that this is a very unusual invasion indeed. The Doctor is about to uncover one of the most heinous crimes in the history of the galaxy. And if he can’t stop it an awful lot of people are going to die.

This second series of The Tenth Doctor Adventures reunites the Tenth Doctor with Rose Tyler as Billie Piper joins David Tennant to reprise the role in audio format with Big Finish Productions. Set in the midst of Season Two, considered by many to be the series’ renaissance period, the first adventure in this trilogy “Infamy of the Zaross” feels very much like a missing episode. Earth-bound like most of the adventures from the first couple of seasons of the Doctor Who reboot, the story finds the Doctor and Rose summoned to Norwich by Jackie Tyler to help out against a rather unusual (and surprisingly contained) alien invasion.

John Dorney’s script leans heavily into the everyday human drama that lay at the roots of Russell T Davies’ era, with the introduction of secondary characters Marge and Jess offering a contrasting mother-daughter relationship to that of Jackie and Rose. Dorney effortlessly sets up their relationship in the first act, which eventually bears fruit in the finale when Jess attempts to make a claim for the fame and success she craves. It’s actually a surprisingly emotive subplot – another nod to RTD’s era – making the supporting cast just as important as the protagonists. Both Rosie Cavaliero (Marge) and Beth Lilly (Jess) are extremely effective at making the characters stand out in a short space of time, providing the emotional core to the whole episode.

David Tennant continues to master the transition from television to audio drama, recreating the Tenth Doctor’s moralistic fury at senseless violence so evocatively that you can picture his facial mannerisms as he delivers each line. Likewise, Billie Piper slips back into the role of Rose Tyler with ease, arguably feeling more like Rose than she did during her return in Season Four. Aided by Dorney’s intuitive script, she whispers witty asides under her breath with her familiar ‘Powell Estate charm’. Camille Coduri has slightly less to do, effectively repeating some of the story beats from “Journey’s End”, but it was very satisfying to hear her tell an alien to “stitch this” before knocking it out. Very Jackie Tyler!

While the prologue reveals too much of the episode’s twist ahead of time, it remains an interesting and subversive take on the typical alien invasion plot, with some sly references to the addicted audiences of ‘scripted reality’ shows like The Only Way is Essex. The Zaross, while not quite as infamous as the title suggests, provide an eye-catching visual (thanks to the excellent cover art) and the sound design by Howard Carter is simply superb. Listening to the episode with my wireless ear-buds whilst on a walk was extremely atmospheric with the incidental music and ambient sounds. Nicholas Briggs’ direction was flawless, as always, creating an extremely cinematic treat for the mind’s eye.

An extraordinary start to this second trilogy of stories, it felt like a trip down memory lane to the mid-2000s when Doctor Who was prime-time Saturday night viewing. Once again, Big Finish manages to get the perfect combination of script, acting, sound design and direction to produce another instant classic. Easy to follow and accessible to wider audiences, specifically fans of the RTD era, Infamy of the Zaross deserves all the fame and glory of its televised counterparts.

Doctor Who: Infamy of the Zaross is available direct from Big Finish on physical CD or digital download. It can also be found on Amazon UK in the physical CD format.