Synopsis: On the streets of New Orleans, word begins to spread about a mysterious new pill that unlocks superpowers unique to each user. The catch: You don’t know what will happen until you take it. While some develop bulletproof skin, invisibility, and super strength, others exhibit a deadlier reaction. But when the pill escalates crime within the city to dangerous levels, a local cop teams with a teenage dealer and a former soldier fuelled by a secret vendetta to fight power with power and risk taking the pill in order to track down and stop the group responsible for creating it.

Adopting a grittier, street-level view of superheroics compared to the Marvel and DC blockbusters, the terribly-named Project Power treats superpowers as the ultimate high with results that are unique to each user. Tying the powers to illicit drugs creates an interesting metaphor for how ultimate power corrupts, particularly when the users distort their bodies in horrific ways. These aren’t glamourous superpowers designed for spandex-clad heroes, each power manifests itself as a curse as users spin the roulette wheel to determine which innate ability they will unlock. Further distancing itself from the four-colour world of comics, Project Power doesn’t take place in a fictional metropolis or an idealised New York, but instead a poverty-stricken New Orleans.

Project Power revolves around three protagonists who eventually become involved in the conspiracy surrounding the sudden emergence of these super-powered pills. Jamie Foxx leads the movie as the mysterious Art, treading a path of ambiguity for much of the movie as he chases down the suppliers of this drug. Foxx is likeable and engaging in the role, and the unlikely friendship he forms with the teenage drug-dealer Robin (Dominique Fishback) feels earned throughout the film. Fishback performs well as the heart of the movie, narrowly avoiding the cliché of the teen sidekick and providing a decent amount of depth to her character through her aspirations to be a rapper. Rounding out the trifecta of leads is Joseph Gordon-Levitt’s Frank, a NOPD officer who is willing to bend the rules in order to get results. I really like Gordon-Levitt as an actor, but his performance here felt extremely reminiscent of his role in The Dark Knight Rises. In fact, it could easily have been a spin-off featuring his character. 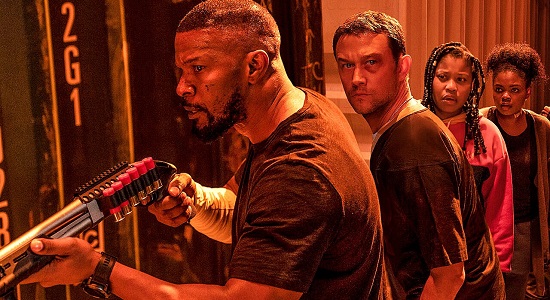 With its three very different protagonists, the film itself felt split into three genres: a teen drama, a police procedural and a John Wick-esque revenge movie – all of which were infused with a superhero twist. As a result, the film seemed somewhat cluttered at times as the three leads vied for the spotlight, especially when they all came together during the third act of the movie. There were some exciting set-pieces to be seen, such as Jamie Foxx’s battle with a flaming drug-dealer in a group of interconnected low-rent apartments. Another highlight was Joseph Gordon-Levitt’s attempts to chase a chameleonic bank robber through the streets before his own superpowers ran out. The CGI and action sequences were fairly solid, although they lacked the same impact and spectacle of an Avengers movie.

Thematically, the film bore a strong resemblance to Code 8 – another urban take on superheroes that compared those with powers to the immigrants who built major American cities and were subsequently left to poverty and drugs. While Project Power touched upon inequalities and the impoverishment of certain communities in New Orleans, it lacked the same emotional impact as Code 8. I was impressed with the representation of black voices through the casting of both Foxx and Fishback, following in the footsteps of Black Panther to showcase black actors in leading science-fiction roles. It makes a change from seeing Will Smith all the time! The exciting premise at the heart of Project Power – those random, temporary superpowers – never felt fully capitalised upon aside from a handful of short set-pieces. I really enjoyed the variety of the different powers, often analogues of other familiar superheroes, and would have liked to have seen more examples of them throughout the movie. The film also tried to add a scientific explanation for the pills midway through, equating these miraculous powers to natural traits found in animals but taken to the extreme. While I understand the attempt to inject some sort of logic into the pills and their effects, I’d have preferred no explanation at all.

I was surprised to learn after the movie ended that it was directed by Henry Joost and Ariel Schulman, the team behind the documentary Catfish. While the pair have directed other movies such as Paranormal Activity 3 & 4 and Nerve, I was still impressed at their directorial abilities here and the intensity of the action scenes. It’s hard-to-describe, but Project Power had a definite “Netflix vibe” to it, inviting comparisons to other Netflix Originals such as Bright, Daredevil, Jessica Jones and Extraction. Perhaps it is something to do with the way they are shot, the budgets, or even the shared urban theme, but it just felt like a Netflix production. Maybe it’s just a perception I have because I know it premiered on VOD as opposed to in the theatres.

Project Power is a much-needed respite for those suffering from Marvel movie malaise, swapping world-ending epics for a street-level take on superpowers. Viewing the fantastic through a realistic prism, Project Power tells a very different kind of superhero story from new perspectives. The representation seen in the film, along with its strong central premise, helps to distinguish the movie from others in the same sub-genre, although its cluttered narrative and use of multiple protagonists results in a disjointed experience at times. Enjoyable but somewhat lacking in impact, Project Power offers fans fed up with the ‘cookie cutter’ format of superhero movies something slightly different and challenging, even if it never truly breaks new ground.

Project Power is available exclusively to stream on Netflix.